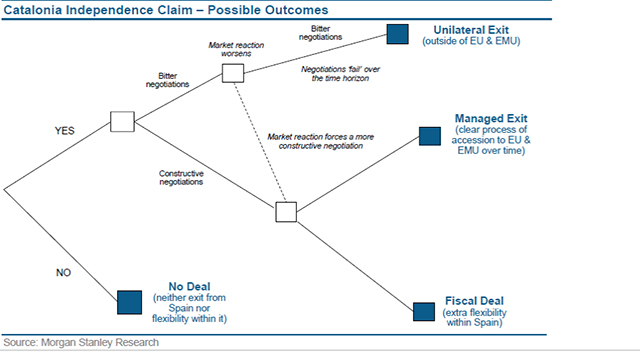 Daniele Antonucci, Europe of Morgan Stanley senior economist considered a scenario of unilateral Catalonia independence unlikely, and bets on a fiscal agreement between Barcelona and the rest of Spain. Catalan public finances would improve, but it will hurt the fiscal data of Spain, he argues.

Any increase of the possibility of an independence referendum in the Spain’s wealthiest region will definitely affect bonds, MS experts say. If doubts about the sustainability of the debt rise, equities will suffer. La Caixa and Bankia credit could be affected as it happened with the Scotland referendum.

MS makes an analogy to the behavior of Canadian equities before the Quebec referendum:

1. Canadian equities behaved worse (9%) than the overall in the two previous months.

2. P/E of Canada vs. Global touched ground before the referendum and reached its lowest level of period 1991-1999.

3. The relative dividend yield rose by 12% in the 3 months prior to the referendum and did not recover until 2013.

Companies headquartered in Catalonia such as Abertis, Almirall, Banco Sabadell, CaixaBank, FCC, Natural Gas and Grifols, even if some of them have a global dimension, could be affected due to the fear effect.

Be the first to comment on "Catalonia independence: not a divorce, but a fiscal pact"