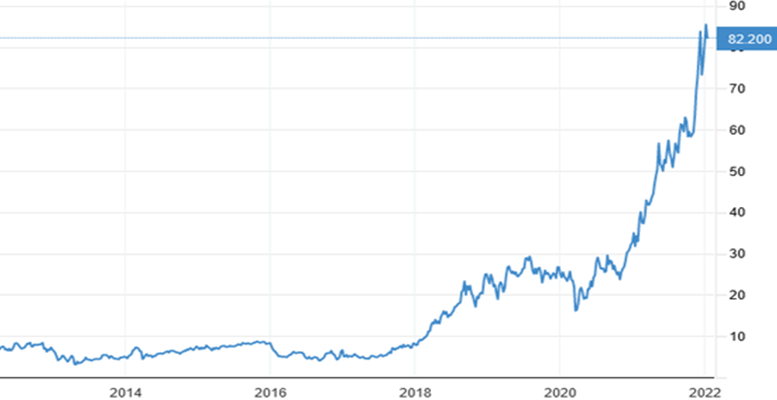 Clemente Polo | It is not the ‘markets’ but rather political decisions and a lack of skill in playing the game of market diplomacy that are behind the sharp rise in electricity prices in Spain. Neither EU institutions nor European governments, including Spain’s, have found the right formula to improve the reduction of greenhouse gas emissions without endangering the welfare of several hundred million citizens. Most member states are highly energy dependent and the EU should be much more cautious both in setting emission reduction targets for the coming years and in deploying its ineffective and incongruous diplomacy in dealing with geopolitical conflicts.

The consequence of unilaterally setting such ambitious emission reduction targets has led to a sharp rise in the price of emission allowances since 2018 (*) and the EU’s clumsy foreign policy is behind the shortage and sharp increase in the price of natural gas in recent months (**). And these are the main causes of the exorbitant hike in electricity generation prices in Spain. This does not only harm us consumers, but also affect the competitiveness of our companies, employment and, ultimately, economic survival in a globalised world. What are they waiting for to establish an EU tariff to tax imports of goods and services with a tax equivalent to the cost of emission rights that local producers of these same products bear, directly or indirectly?

And when can we expect a realistic and independent foreign policy that does not jeopardise the supply of raw materials essential to our economies? It is highly incongruous that EU leaders dare not bother some Arab countries, so far removed in many cases from European standards in terms of the democratic quality of their institutions and respect for human rights, because oil supplies are vital to our economies. Yet we meddle in the internal policies of other countries whose energy supplies are just as much a priority. Less unilateralism and empty rhetoric, and more common sense and prudence in setting goals and political alliances that jeopardise our way of life.

(*) The price of emission allowances in the EU

In 2005, the EU unilaterally launched the Emissions Trading System, a market in which companies considered to be major emitters of carbon dioxide (CO2), nitric oxide (N2O) and perfluorocarbon are obliged to participate in order to reduce greenhouse gas emissions. Amongst the sectors participating in this market are electricity generating companies that emit CO2 to produce electricity. The system is currently in its fourth phase (2021-2030) and the EU has introduced legislative changes “to step up cost-effective emission reductions and facilitate investments in low-carbon technologies to ensure the objective of a 40% reduction in 2030 of 1990 emissions”.

The legislative changes introduced in the EU involved raising the annual emission reduction rate to 2.2% from 2021 and opened the market to investors who are not in surplus or deficit of allowances. They also strengthened the mechanism for reducing surplus allowances by increasing the rate at which surplus allowances are transferred to the “market stability reserve” fund in order to reduce fluctuations in allowance prices. Instead of reducing fluctuations, these legislative changes have pushed the price of allowances from 7.00 on 3 January 2018 to 82.13 on 3 January 2022. The increase in allowance prices started as soon as the legislative change was approved. And although it moderated in the second half of 2019 and the first quarter of 2020, it rose sharply again from March 2020 onwards, despite the fact that economies were in recession. The rise became even more pronounced during 2021. The price of allowances increased by 75.3% in the first half of 2021, 45.67% in the second half and 155.25% for the year as a whole. Since mid-March 2018, the price has increased 11.7 times in 4 years and this increase has logically affected the cost of electricity generating companies, which have passed it on to their customers’ prices.

In addition to the increase in emission allowance prices, power plants using natural gas as a fuel have recorded very significant increases in the price of their raw material in 2021. In the European reference market (TTF Dutch), natural gas prices have risen at a rapid pace. The reference price at the end of December 2018 was 21.05, at the end of 2019 it was 12.63, at the end of 2020 16.84, at the end of June 2021 31.77. And in mid-December 2011 it reached 137.4. In summary, in the first half of the year the price of natural gas in the EU increased by approximately 88.7%, by mid-December by 715.9%. There is no doubt that increases of this calibre in the raw material for power plants have had a major impact on the marginal prices of electricity generation.

As for the causes, the report by the Iberian Gas Market operator (MIBGAS) for the third quarter of 2021 blames the rise on “the behaviour of the major gas suppliers to Europe by pipeline”. From Norway, due to maintenance work, and in the case of Russia, due to the 30% reduction in the volume supplied by the Ukrainian pipeline. Algerian gas continued to flow, although “the forthcoming termination of Algerian gas transit contracts via Morocco, as well as Algerian official statements to that effect, add an additional factor of uncertainty”.

In addition to political tensions in Ukraine and the Sahara, two frozen conflicts in Europe and Africa, there is increased demand for Russian gas from both China, via the Power of Siberia pipeline, and Turkey. The EU’s political and economic sanctions against Russia for its involvement in the conflict in Ukraine have not only failed to have the desired effect of reducing tensions. They have strengthened ties between the governments of Russia and China and boosted their trade exchanges, including the sale of Russian gas to the Asian giant, which is expected to grow by 58.9.0% between now and 2030. In the case of the Algerian-Moroccan conflict, the closure on 31 October 2021 of the largest pipeline transporting gas from Algeria to Spain via Morocco reduced the arrival of the raw material in Tarifa. To mitigate the effects of the Moroccan closure, Algeria increased the flow of supplies through the direct Medgaz pipeline by 23.4 per cent and significantly increased the transport of liquefied natural gas by ship, with the consequent increase in the price of the fuel. Neither EU nor Spanish diplomacy has been skilful enough to secure the cooperation of the Moroccan government in guaranteeing gas supplies from Algeria. And the EU has no small amount of levers at its disposal. It has a privileged partnership with the Kingdom of Morocco, is the largest market for its exports and is its largest foreign investor. While always being tactful, it is sometimes useful to use them.