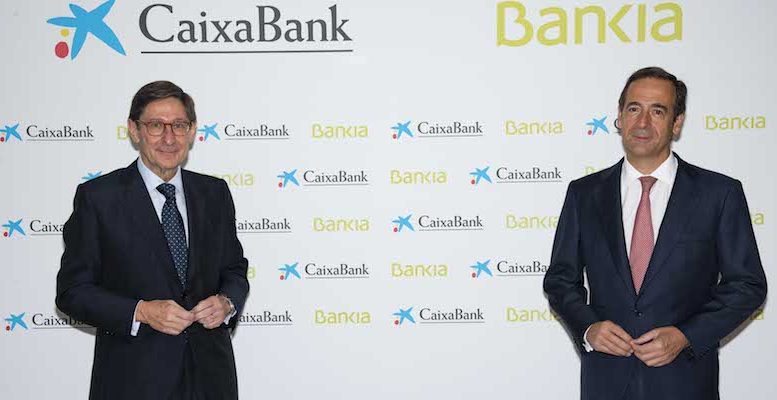 The Boards of Directors of CaixaBank and Bankia have approved the plan for the merger by absorption of Bankia by CaixaBank, which consists of an exchange ratio of 0.6845 new CaixaBank ordinary shares for every Bankia share.

The new entity, which will maintain the CaixaBank brand, is to be founded with the aim of adding value to customers, improving profitability for shareholders and continuing to support Spain’s economic recovery. Once the due diligence process has been completed by both entities, and the plan for the merger by absorption has been approved by both Boards of Directors, the next step requires both Boards’ approval of the merger reports, as well as the calls for the General Shareholders’ Meetings, which are scheduled to take place in November.

The operation is expected to close during the first quarter of 2021, once all the relevant regulatory authorisations are received from the Ministry of Economic Affairs and Digital Transformation, the National Commission of Markets and Competition, as well as non-opposition confirmed from the Directorate-General for Insurance and Pension Funds, the Spanish Securities and Stock Exchange Commission (CNMV) and the Bank of Spain for CaixaBank’s acquisition of significant holdings in a company subject to their supervision.

Details of the operation

If the total number of outstanding Bankia shares that could be exchanged is taken into account, the maximum number of CaixaBank shares to issue in order to meet the merger exchange amounts to 2,079,209,002 CaixaBank ordinary shares, each with a nominal value of one euro, a figure that could be adjusted based on Bankia’s treasury stock.

The established exchange assumes that CaixaBank shareholders will initially represent 74.2% of the capital of the new entity, and those of Bankia will make up 25.8%. CriteriaCaixa, an entity 100% controlled by the “la Caixa” Banking Foundation, will remain as CaixaBank’s reference shareholder with around 30% of the shareholding, while the FROB (Fund for Orderly Bank Restructuring) will hold 16.1%.

The remaining shareholding structure of the combined entity consists of 54% free float (shares listed on the stock market), 37% of which belongs to institutional investors and 17% to the retail market.

Most of the expected financial impacts of the merger announced this morning are in line with expectations. According to analysts at Santander:

“Therefore, these effects are likely to be reflected in the share prices of both Bankia and CaixaBank, although the confirmation that the transaction has been agreed could reinforce the positive market sentiment, already seen in the last few days, towards these entities and Spanish financial securities in general.”

The combined entity resulting from the merger will be chaired by José Ignacio Goirigolzarri, Bankia’s current chairman, once he is appointed by the new CaixaBank Board of Directors. The chairman, who will be an executive director, will be responsible for the areas of Secretary of the Board, External Communication, Institutional Relations and Internal Auditing (notwithstanding that this area shall remain accountable to the Audit and Control Committee). The current CEO of CaixaBank, Gonzalo Gortázar, will continue as chief executive of the resulting entity reporting directly to the Board of Directors, having responsibility for all areas not included in the above paragraph and chairing the Management Committee.

The combined entity’s total assets will exceed €664 billion, a volume that will make it the largest bank in the domestic market, with an important position at a European level and a market capitalisation of over €16 billion.

The new Group will consolidate its leadership in the retail banking sector in Spain, with more than 20 million customers and a top-ranking market share in all key products: deposits (24%), loans (25%) and long-term savings products (29%), which includes savings insurance, investment funds and pension plans.

Over a period of five years, the combined entity is expected to progressively generate revenue synergies amounting to €290 million annually. Furthermore, its estimate points towards achieving annual recurring cost savings of €770 million (fully achieved by 2023), which will considerably increase the cost-to-income ratio up to highly competitive levels (pro forma cost-to-income ratio of 47.9% at 2019, including the full synergistic effect).

Following additional write-downs resulting from the operation, the combined entity will show the lowest non-performing loan ratio in Spain of 4.1%, and a comfortable coverage of 64%, one of the highest among the main Spanish banks.

Moreover, CaixaBank’s and Bankia’s solid equity position will provide the capacity to absorb restructuring costs and valuation adjustments, with the combined entity achieving a CET1 ratio of 11.6%, which is a very broad margin –310 basis points– above regulatory requirements. Its strong liquidity position (€128 billion), which will continue to be the entity’s hallmark, will aid economic recovery through credit growth.The generation of synergies will improve the expected return, with a RoTE estimated by market consensus of above 8% in 2022.

The operation makes strategic and financial sense but experts at Bankinter think that the stock prices already reflect the attractiveness of the operation.

“After the rally the prices since September 3 (+39.2% for Bankia and +13.9% Caixabank), Bankia has reached our Target Price (1.44 euros/acc) and the potential we estimate in Caixabank is just +3.8%. The share swap is attractive to the Madrid- based bank, but we recommend selling BKIA shares for cash – the integration does not involve a cash consideration”.

“Our strategy of avoiding the industry has not changed because the fundamentals (interest rates, margins, ROE, etc…) remain virtually unchanged and the macro environment is challenging.”