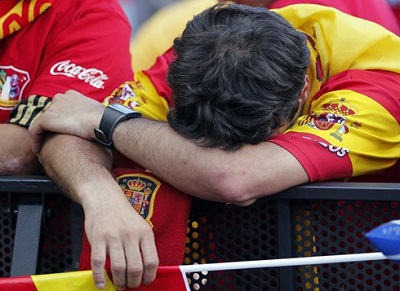 MADRID | Most observers take for granted that the rescue seems the most likely scenario. It’s not a guess, nor an assumption based on fundamentals. They simply look at the rising trend risk premium shows, forecasting that sooner or later the Treasury will prove unable to sell its paper in the markets. The only open question is when it will happen. Some believe that doomsday scenario might materialise by the end of the summer. Others, more cautiously, point to the scarce financing needs over the rest of the year as a solid reason to postpone the event to a later stage. They may be right. But if one aims at understanding the current disarray in differentials, the right question to ask is why confidence on Spain is faltering so much.

To begin with, delivering year after year huge deficits and budget deviations doesn’t seem the best visit card when asking for credit. The impression half of the expenses, run by regional governments, escapes from any effective control dashes any hope to convince the markets that fiscal consolidation can be put safely back on track.

The financial front offers no respite. Utter discomfiture and gross mismanagement in Bankia and other institutions have spread mistrust on the whole system. The gov

ernment has forcefully contributed to fuel such sentiment by heralding so loudly the existence of overall and massive solvency shortcomings. The banking rescue plan has failed to decouple financial from sovereign risk, the burden of cleaning up balance sheets falling on the Spanish budget. Europe will just provide liquidity and time to digest such unpalatable contingencies.

The confidence gap can only widen as the Finance minister claims in Parliament to be unable to foot civil servants’ salaries and essential services. How can you expect investors to flock in buying public debt in such a grim scenario?

But the bottleneck problem throttling any chance to solve others is depression. It is cutting to pieces public revenues, ballooning unemployment expenses and eroding banking balance sheets. With no prospect of recovery at bay, any adjustment plan is born hopelessly dead. The gelid welcome markets offered to the recent budgetary squeezing shows how deep their distrust is.

Unless Spain is given some breathing space to mend its woes, it might be trapped in a vicious circle of economic free-fall and increasing budgetary and financial troubles. Only the ECB can come to rescue but it has made no sign to be willing to perform even a limited salvaging effort. The Treasury might hold for a rather prolonged time paying current interest rates. But should the economic outlook markedly worsen, risk premium is likely to make Spain derail.