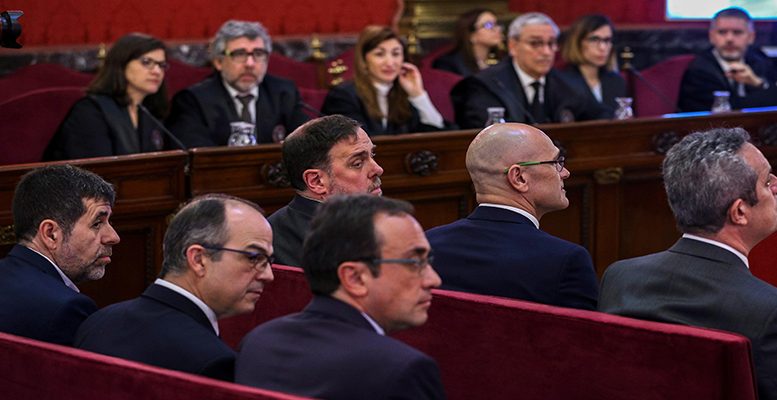 Nicolás García Rivas (The Conversation) | The separatist leaders currently in prison – or fleeing justice – are accused of rebellion, the most serious crime against the constitution. All because of the events which took place two years ago, following the adoption by the Catalan parliament of various laws of “disconnection” of Catalonia from Spain and its subsequent separation from our State.

Perhaps few Spaniards know that our Basic Law allows its reform to an unsuspected extent, to the point of modifying it from top to bottom and changing it completely. Article 168 thus recognises it, with relevant parliamentary majorities and, in some cases, a previous referendum of the Spanish people.

So, if any political group advocates a constitutional reform and designs a separatist programme it can move forward with its plan without fear that the justice of the State will move against it, provided it remains within the channel laid down by the constitution and generates the consensus necessary to achieve it.

Could Catalonia become independent through the Constitution? We absolutely have to say yes, but obviously only if the constitutional provisions are complied with.

In the case of the Calatan separatists, the bid for separation from the Spanish state did not recognise this constitutional route and followed an alternative illegitimate route by approving these laws of disconnection in a Catalan parliament which lacked the competences for it.

Does this conduct constitute the crime of rebellion? Definitely not. The crime of rebellion requires that the attempt to “overthrow or modify the Constitution completely or in part” o to “declare the independence of a part of the national territory” is realised through a specific conduct, identified in the expression “public and violent uprising”. This comes from the 19th century penal codes, when the army and certain political forces were inclined to coups d’état through this type of uprising, including the attempted coup of Tejero in 1981. This is surely why our Penal Code in force continues this tradition and has not modified this crime giving it a more modern tone, in which attacks on our Magna Carta could be realised without violence.

The approval of the separatist laws in the Catalan Parliament on 6-7 September 2017 – undoubtedly illegitimate – did not constitute “a public and violent uprising” however you look at this phrase.

Indeed, we suppose that that parliamentary vote, a clear affront to the Spanish Constitution, could be termed a “public uprising”; a significant semantic effort would have to be realised for that. But, in no case was violence used (perhaps verbal violence, but that does not count) and therefore there was no crime of rebellion in these events.

On 20 September, a few days after, the Police and Guardia Civil went to the headquarters of the regional Ministry of Economics to carry out a search, in an attempt to prevent the separatist referendum called for the first of October. 40,000 angry people gathered around the building.

The leaders of the separatist movement in civil society – Jordi Sanchez and Jordi Cuixart – harangued those present – as happens in any protest – but at no moment promoted violence. That there was violence in the form of the destruction of the Guardia Civil´s vehicles was something as spontaneous as the acts of vandalism which often accompany perfectly legal demonstrations. So not even in this dissident demonstration by the Catalan population can the violence be seen needed to constitute the crime of rebellion foreseen in article 472 CP.

And 1 October? Even less. The illegitimate desire to vote in favour or against independence – although logically the immense majority of citizens present in the electoral colleges were partisan – cannot be categorised as “violence”. The acts of resistance are perfectly categorised in our Penal Code as crimes of resisting the police in the carrying out of their functions and is punished with a lesser punishment of up to one year in prison: in no case can it be confused with a crime of rebellion.

On 10 October there was the first declaration of independence, which was immediately suspended (and so lack any juridical effect) and on 26 September it was proclaimed again article 155 of the Constitution was automatically applied, which amounted to a suspension of Catalonia´s autonomy and the assumption of direct rule by the Spanish state, which called regional elections for 21 December. These declarations, completely illegitimate, did not involve “violence” either.

If all this is so, why have the separatist leaders been accused of having planned and executed a crime of rebellion? This has to be answered by first explaining that the first to be sent to prison by the Central Investigating Magistrate Carmen Lamela on 16 October 2017 were the “Jordis” accused of another crime, sedition, specifically for the events of 20/21 September at the Economics Ministry. It is a public order offence, serious, but does not imply an attack on the Constitution. A few days later, on 30 October, the Investigating Magistrate of the Supreme Court (Pablo Llarena), at the insistence of the Chief State Prosecutor, charged the separatist politicians (Junqueras and the rest) with the crime of rebellion.

The reason for this charge can perhaps be found in the provision in article 384 bis of the Law of Criminal Judgement, which foresees the automatic suspension in their functions of those charged with terrorism or rebellion. This latter charge facilitated the political disqualification of the separatist leaders.

What happened then was a series of failed attempts by the State to imprison the Catalan President Carles Puigdemont, who secured judgements against his extradition to Spain in both Belgium and Germany precisely because their the judges in those countries saw no evidence in what happened in Catalonia of the violence necessary to categorise it as rebellion. This fact should be kept in mind only days from the sentence on these events being handed down in the Supreme Court.

The trial has unrolled over four months in the Court´s second chamber, broadcast live in its entirety. The public prosecution has been divided between the State Prosecutor, in favour of condemnation for rebellion, and the Attorney General, in favour of sedition (precisely because it sees no evidence of “a public and violent uprising”). The direction of the trial by the presiding judge Manuel Marchena has been marked by constant interventions – giving and removing the word – with clear glimpses of his high technical preparation. If the case ends up in the European Court of Human Rights – as seems likely – it will be difficult to unravel the judicial skein woven by Marchena. However, I think that evidence presented in now way shows that the defendants committed the crime of rebellion. Neither of sedition, although I recognise that the ambiguity with which article 544 CP defines this crime allows a more flexible definition. We need only find out now that these seven senior Spanish judges decide.