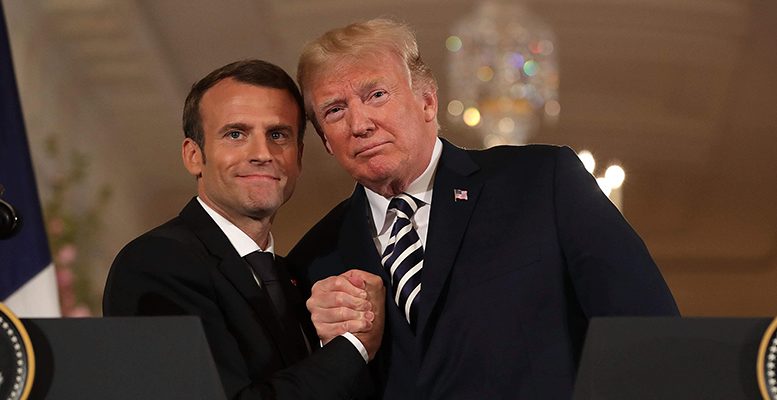 Shaun Riordan | We do not usually think of France´s dapper, sophisticated young president, the last hope of European liberal elites, pursuing the same objectives as America´s ageing and overweight bully, the sworn enemy of liberal internationalism. But both Macron and Trump agree on the need to end the conflict in Ukraine and re-integrate Russia into the international community.

The documents released as part of the Trump impeachment investigation in the US make clear that President Trump has three objectives in Ukraine: secure dirt on former vice-President Joe Biden, re-write the story of the 2016 election and persuade newly elected President Zelensky to reach a deal with Russia´s President Putin. The first of these objectives would clearly help Trump in his fight for re-election to the White House, the latter two appear to bring him no direct benefits. They would, however, benefit Vladimir Putin.

US sanctions were imposed on Russia following Russia´s invasion of Ukraine in 2014. Further sanctions were imposed on Russia following its interference in the 2016 US elections, including by the Trump administration. If Trump can re-write the history of the 2016 elections as Ukrainian interference on behalf of Hillary Clinton, instead of Russian interference on behalf of Trump, and persuade Zelensky to sign a deal with Putin, he can justify lifting sanctions on Russia: a long-time and key objective of the Putin government. The investment of the Russian intelligence services in Trump would finally be justified.

Macron too is promoting an agreement between Putin and Zelensky which would allow European sanctions against Russia to be eased, if not lifted altogether, albeit for different reasons. Partly this is a revival of the traditional French preference for a European security framework including Russia and excluding the US. Partly, it reflects France´s security and geopolitical priorities. Both are affected by Brexit.

In 1969, Henry Kissinger was shocked when an advisor to President de Gaulle told him that the world would be divided into three centres of power: the US, Asia centred round Beijing and Europe dominated by a Paris-Moscow axis. The election of Trump, with his hostility towards the EU and ambiguity about NATO, and Brexit have together revived this analysis. If Europe can no longer depend on the US for security, then the only way of securing its Eastern flank is to integrate Russia into European security. This could have the added advantage of splitting Russia away from China, easing Europe´s dealings with the latter.

French security and geopolitical concerns are focused on its former colonies in West Africa and North Africa. It is a Mediterranean state, not a central European one. With no threat from Germany, it has no interest in deploying its forces to the East. Although France may welcome Brexit as strengthening its own influence in the EU (especially with a weak and politically divided Germany), it is worried about the withdrawal of its main military ally.

Franco-German military cooperation looks good on paper but amounts to little in reality. Since the St Malo Declaration in 1998, France´s closest political collaborator has been the UK. Macron’s proposals for a European Intervention Initiative and a European Security Council are both designed to maintain that collaboration post-Brexit. But France wants that collaboration in West and North Africa. It does not want the UK distracted by security crises in Eastern Europe.

Zelensky and Putin are expected to meet soon in Paris to seek an end to the Ukraine crisis. Although the summit will be chaired by both Merkel and Macron, it will be Macron pressing for an agreement, in which Russia will no doubt retain the Crimea in return for security guarantees for the rump Ukraine. Macron will know that, on this at least, he enjoys Trump´s full support.