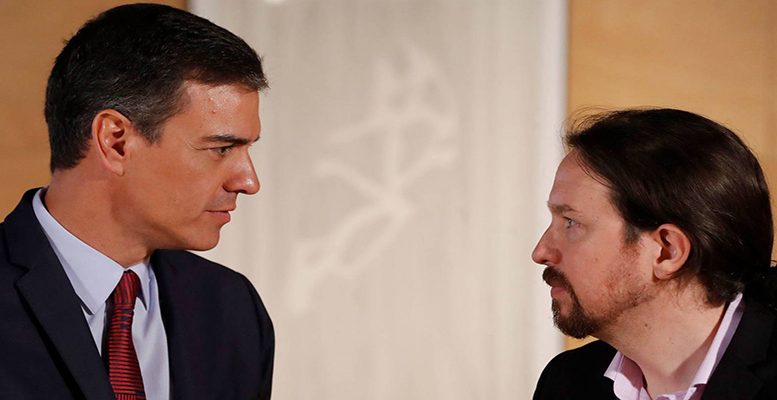 Fernando G. Urbaneja | Pedro Sánchez, relative winner of the elections (with fewer votes and seats) has chosen the less rugged path to his investiture and to remain in power. He is returning to the original plan, that of the censure vote in June 2017 which allowed him to replace Rajoy. The pact with Iglesias was impossible in the last legislature (from May to June), which passed through months of mutual reproaches. Today it came about in an afternoon; a conversation in the Moncloa between Pedro Sanchez and Pablo Iglesias renewed the model of the pact to remove Rajoy with the argument of creating a “progressive” government, the key word which avoids other more precise words, like a government of the left.

Pablo Iglesias summed it up after signing the agreement: “before it was an opportunity and now it is a necessity”. For both politicians, who emerged damaged from Sunday´s polls, the agreement is the easiest short term decision. Yes or yes, Sanchez told his supporters gathered outside the party headquarters on Sunday; a declaration as relevant as was the no or no to Rajoy which provoked a crisis in PSOE, the sacking of Sanchez and his subsequent return.

Sanchez and Iglesias alone do not amount to a majority, but they can reach the necessary votes for an investiture in December. Sanchez will have to swallow the coalition government which he has resisted, including Iglesias as deputy prime minister, but the other options were both complicated and unlikely. Repeating the elections was an unacceptable risk and negotiating a grand coalition with the right seemed unachievable or too difficult.

The agreement, drafted at speed, is a string of proposals more literary than anything else, although they will have to pay for not fulfilling it. It pretends that housing is a right and not a product which sounds brilliant, but nothing more. To defend a balanced budget with a long list of increased spending financed by fairer and more progressive taxes sounds like rhetoric. Paper is cheap.

To escape the labyrinth of the impasse, to form a government and deal with the Catalan issue in a spirit of dialogue can reduce tensions, at least for a few months. The contradictions, the frustrations, will come later. While the right headed by the youthful Casado gains time, without tensions and risky decisions, moves to the centre and waits its opportunity in opposition.