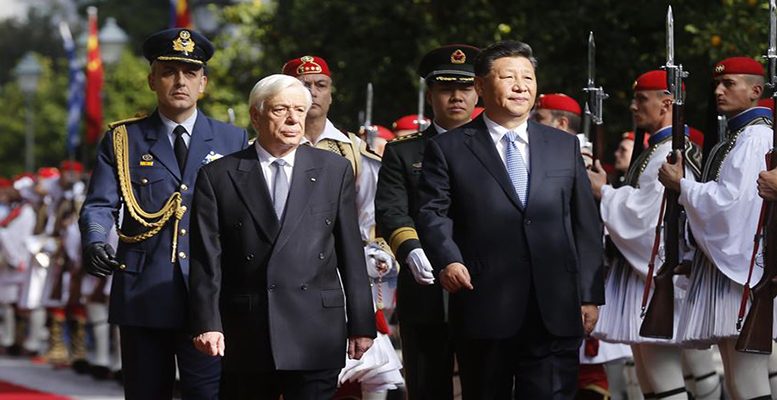 Jens Bastian (MacroPolis) | Next week, the Chinese President Xi Jinping will visit Athens. [Note from The Corner: this piece was written on November 7th, before Mr Xi’s visit]. It is his first official visit, but his second journey to Greece. In July 2014, he made a technical stop on the island of Rhodes while on his way to Brazil to attend the sixth BRICS Summit (Brazil, Russia, India, China and South Africa) in Fortaleza, Brazil. He briefly met with then Greek Prime Minister Antonis Samaras to exchange views on the development of Sino-Greek relations. During his stay in Athens from November 9-11, Xi will have numerous opportunities to witness successful examples of what China calls “win-win cooperation”. But the Chinese president would also be well advised not to close his eyes to some lessons learned in Sino-Greek cooperation.

A frequent traveller to Greece is the Chinese Premier Li Keqiang. During his visit to Athens and the Port of Piraeus in June 2014, he called Greece “China’s Gateway to Europe”. Five years later the Greek Minister for Development and Investments, Adonis Georgiadis, took stock of Sino-Greek relations: “We really admire China here; it is one of the biggest investors in Greece and in the last 10 years we made many success stories together. Even more Chinese investments would be very welcome.” (Kathimerini, 26. September 2019).

Such ambitious rhetoric is backed-up by facts established on the ground during the past decade. The gateway’s first opening concerned the Chinese shipping group COSCO’s (Chinese Ocean Shipping Company) decision in 2009 to lease container terminals in Piraeus under a 35-year concession agreement with the Greek government. In April 2016, this anchor investment led to COSCO becoming the majority owner (51 percent) of the Piraeus Port Authority (OLP), the management company responsible for the operation of the entire Port of Piraeus. Based on mandatory investment benchmarks COSCO reserved the right to acquire a further 16 percent of OLP by 2021. The price for the 51 percent shareholding was €280.5 million. The additional 16 percent can be acquired for 88 million euros.

COSCO’s involvement in the Port of Piraeus is long-term, with clear strategic objectives and the capacity to mobilise considerable investment volumes. In September 2019, the inter-ministerial Port Planning and Development Commission (ESAL) approved COSCO’s proposed 800-million-euro investment plan in the Port of Piraeus. COSCO’s master plan includes the construction of a fourth container terminal, the transformation of the dock used for ship repairs into a new car terminal, four hotels, the enlargement of the cruise passenger terminal, additional storage facilities, a logistics and a commercial centre. This comprehensive engagement has positive knock-on effects in the wider Athens area. It also impacts on Greece’s real economy, the shipping sector, the labour market, tourism and commercial trade.

What can we learn from the evolution of Sino-Greek cooperation during the past decade? COSCO’s investment in the Port of Piraeus is part of the group’s growing shipping portfolio in Europe and China’s increasing importance in shipping finance. COSCO is building global maritime supply chains in which Piraeus plays a central connectivity role. Leasing constituted the initial investment in Greece. Today the profile of COSCO’s acquisitions is characterised by majority and minority shareholdings in numerous European ports. Building maritime infrastructure across Europe gives China leverage over land-based interconnectivity and corresponding maritime supply chains.

President Xi Jinping has reason to be impressed by what he will see in Greece. But, alas, that is not the full story of Sino-Greek engagement. His ambassador to Greece, Ms. Zhang Qiyue can also put together a dossier of various lessons learned from failing Chinese initiatives. There are a number of recent examples which illustrate that China’s growing footprint in Greece is not exclusively a success story. Some ambitious projects either remain in the planning stage or have failed, others are delayed; despite the vibrant promotional rhetoric between Athens and Beijing. Consider the following cases:

These different examples highlight that project delays, their cancellation or outright failures are also part and parcel of the Sino-Greek investment story during the past decade. They highlight the complexities of navigating Greek politics and administrative obstacles. They also illustrate that Chinese companies can become the victims of fraud and manipulation. Finally, these examples signal a broader trend, namely that the initial honeymoon period for Chinese companies is coming to an end. Investment screening and strict due diligence are now much more prominent, both in Beijing as well as in Athens. Chinese companies are applying lessons learned in terms of corporate scrutiny and public tender details. Furthermore, Greek constituencies, be they from politics, the media, NGOs or investigative authorities are scrutinising Chinese investment initiatives in terms of transparency, origin of financial resources and the additionality these activities can provide for the local economy.

But the lessons learned – and this is the noteworthy aspect – do not deter interested Chinese companies from seeking other avenues of cooperation in Greece later on. This is a major difference to many European companies who are willing to invest in Greece but withdraw at the sight of the first hurdles appearing along the way. By contrast, Chinese companies view these hurdles as obstacles that can be removed over the short-to-medium-term.

Sino-Greek joint ventures are now taking place in the energy sector (e.g. State Grid Corp.’s 26 percent shareholding in ADMIE since 2016), in tourism (yet again the Fosun Group), and most recently investment in Artificial Intelligence (AI). In June 2019, the Chinese AI company DeepBlue Technologyannounced that it will establish an innovation channel between Greece and China. DeepBlue is the world’s largest AI application development company. In cooperation with Thessaloniki’s Aristotle University, DeepBlue intends to build an AI innovation hub in Greece.

Greece’s growing partnership with China will continue to evolve. The “Gateway” is expanding and opening new land-based options and maritime avenues for bilateral cooperation. When President Xi Jinping arrives in Athens, we can expect the announcement of new Sino-Greek initiatives. But his Greek counterparts should consider choosing their words of praise carefully. As the US Secretary of State Mike Pompeo reminded his Greek interlocutors recently during his Athens visit, not every Chinese proposal comes without strings attached. It may also be appropriate at times to say “no, thank you” to a further investment proposal from Beijing. Chinese companies will continue to participate in public tenders in Greece. But they are likely to face higher hurdles, not least from European Union regulatory scrutiny towards Chinese investments in the technology sector and financing of infrastructure projects in EU member states.

*Jens Bastian is an independent economic analyst and financial sector consultant, based in Athens, Greece