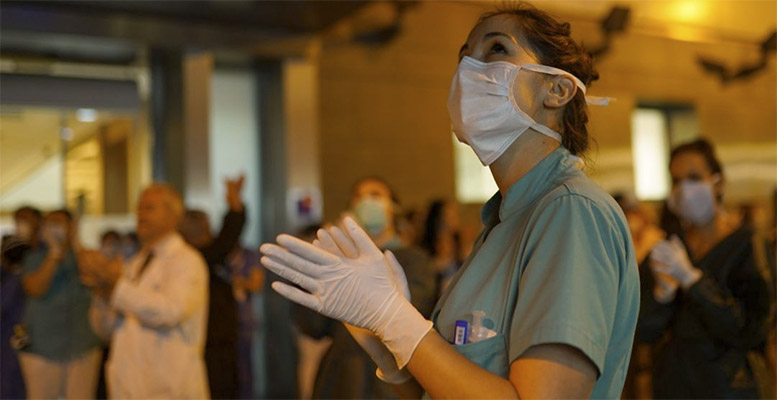 Every day at 8 PM, Spaniards go out to their windows and balconies to applaud the healthcare workers who are supporting the coronavirus crisis

The number of people employed in Spain’s health sector almost doubled between 2000 and 2019, from 633,000 at the start of the century to to over 1.1 million last year. This data is from the Active Population Survey (EPA), which is picked up in a Funcas document. It reminds us that, despite the fact Spain’s health situation is critical at the moment, the country has never had as many people working in the sector as it does today.

Over the last two decades, the Spanish health sector’s percentage of the country’s total employment has grown considerably. In 2000, the number of people working in the health sector barely represented 4% of all those employed in Spain. In 2019, however, this proportion was close to 5.7%.

The afore-mentioned Funcas document is the first in the series “Those who care for us in the coronavirus crisis” which the think tank will publish as a contribution to the analysis and recognition of the key sectors managing the pandemic. It flags that, contrary to what is often claimed, jobs in the health sector were fairly protected from the employment shocks caused by the economic crisis. Male employment rose between 2008 and 2014; female employment more or less stabilized during those critical years, returning to its previous strong growth path in 2014.

The document also highlights the consolidation of women workers in the health sector. In 2019, the number of women employed in the sector was 809,000, while the number of men employed was slightly below 308,000. Particularly significant is the advancement of women in what is considered as the sector’s main profession, namely that of a doctor. Although the ratio of women/ men in health care activities as a whole has remained stable (in a range of about 250 women to 100 men from 2004 to 2019 ), the change in the medical profession has been extraordinary. In 2000, there were 65 female doctors to every 100 male doctors; in 2019, the number of female doctors for every 100 male doctors was 131.

Finally, in the context of the progressive ageing of the workforce in Spain, those employed in the health sector have also seen their average age increase, from 39.9 years in 2000 to 44.2 in 2019. That said, over the last six years, employment in this sector has experienced a rejuvenation compared to the rest of the sectors. Its average age has remained almost stable.