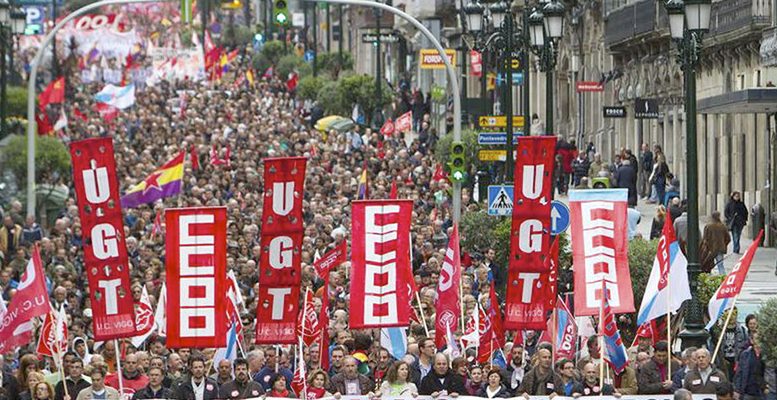 The latest reports are enough to push the top echelons of Spain’s big trade unions to the brink of a nervous  breakdown. The information available says trade union affiliation in Spain is at a four-decade minimum and one of the lowest in Europe.

While in Sweden affiliation is 70%, in Italy and in the UK 25%- an anti-trade union country if ever there was one – and in Germany 20%, in Spain its now no more tan 15%, according to the most optimistic estimations, and 8% or 10% in line with the most realistic. However strange it may seem, the demise of Spain’s trade unions has speeded up since the crisis. While in 2008 the two big union headquarters had nearly 3 million members, they would now have no more than 2 million, or even less. What does this mean? Well if we take into account that, despite its alleged anti-business sentiment, the vast majority of members are in the public sector – Education, Health, Renfe, the Metro etc. – the reality is that in the end hardly two, three or four out of every 100 workers is a trade union member and, what is worse, pays his union membership.

The first consequence of this low level of representation is that unions in Spain have lost almost all their public and social relevance. Their marches and demonstrations are followed by very few people, so few in fact that at times it is quite clear that non even their key group of leaders and delegates are in attendance.

It’s no surprise that in the last few years trade union leaders, very much a part of the public debate ten years ago, give the impression that they have retired from the scene. They make very few comments or take positions and those are scarcely picked up in the press. For example, most people would not be able to tell you the name of the current secretary of the UGT. Can you imagine that happening with historical leaders suech as Marcelino Camacho or  Nicolás Redondo!

The trade unions have not just stopped being of interest to the majority of workers. Business men hardly take them into consideration. They contact them out of courtesy – and obligation of course – since they are social agents, but no management body is quaking about what they might say or do. It’s obvious that a lot of what has happened, apart from the well-known corruption cases, is due to the labour reform and other regulations which have left them fairly meaningless. Their role in collective bargaining has been practically eliminated, now that this process is conducted inside the company between the management and the employees. There has been a massive drain on trade union revenues due to the decline in membership fees. Add to this the fact that when the PP came to power, it stopped paying for lots of things, principally, training courses. So the unions are close to being bankrupt and without any resources to implement any policy.

When they are asked about the situation, their leaders usually blame what has happened on the crisis, above all on the job losses which led to a huge fall-off in membership. But this seems very strange. The crisis, with its string of temporary and part-time jobs, corporate abuse, lay-offs, low salaries and instability all around, should have produced the opposite effect, more recourse to the trade unions. If that was not in fact the case, then there are reasons. In the first place, a trade union model very focused on the public sector and certain industries, a defender of workers with a fixed contract. One which has not lifted a finger to help those with temporary, part-time or unstable contracts which are in the majority now. And all this aside from the fact that the outsourcing of the economy is creating new industries, without any trade union tradition or a desire for one.

This crisis situation will only get worse in the coming years, as services, robotics, the collaborative economy, externalisation, teleworking and some of the other latest trends gain ground and leave the unions without any role to play. The situation has reached such a limit that only the overturning of the labour market reform – advocated by the former socialist leader Pedro Sánchez – could cushion their decline. And that would only be a temporary respite. Which apparently they are not going to get. The current PSOE party, managed by an executive team, doesn’t seem to have the least intention of raising the issue with Mariano Rajoy and demand that the labour market reform is overturned.

Basically because the socialists themselves – except for Sánchez’s group– know that the fact Spain creates half of the jobs in Europe is due to the flexibility which these labour laws have produced. And, whatever they might say, they don’t want to be responsible for ending this virtuous cycle, and then later be blamed once again for implementing bad economic policies. And also because the party, completely gutted, is in no condition to worry about its trade union colleagues. In fact, the current PSOE party neither called them nor summoned them when it reached its agreement with the PP to increase the minimum inter-profesional salary by 8%.

And all this in addition to the fact that relations with Podemos – the new left – are fairly weak, not to mention non-existent. Or that the virtual disappearance of the Izquierda Unida and PCE parties has left them without their allies of over the last 40 years.