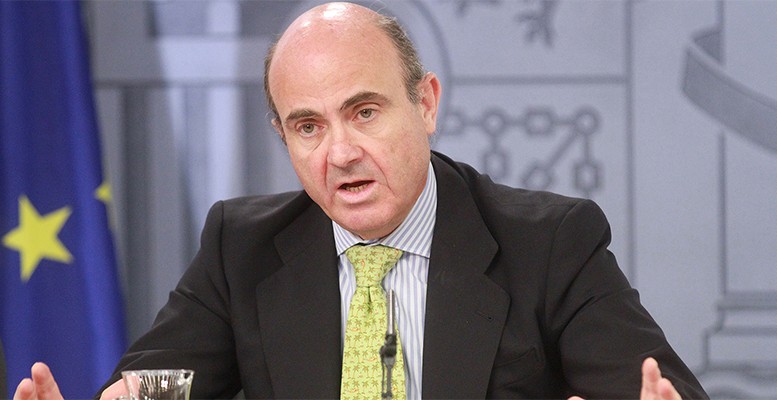 Luis de Guindos, Minister of Economy and Competitiveness of Spain.[

Economic forerunners from the four Spanish leading parties engaged themselves in a confusing and unpalatable TV debate on Sunday night. The moderator was much to blame as she hardly clarified the key policy issues. The participants also proved unable to put forward a coherent analysis of what is at stake in these elections, failing to table articulate ideas on how to cope with the main shortcomings. Mr Garicano from Ciudadanos just vanished while the socialist and right-wing representatives, Mr Sevilla and Mr Guindos, clashed in a bitter and abstruse row over their record. Thus, Mr Garzón from the leftist coalition Unidos Podemos was able to run free confining its intervention to sketch a dire picture of the current state of play.

Watching the debate one might draw the conclusion that the incumbent government casts an utterly complacent view on the economy while the Socialists and Podemos only see an impoverished country. They both adamantly stressed the hardship many people experience faced with long-term unemployment and scant prospects of finding a decent job. Mr Garicano missed the opportunity to provide a promising policy view by abridging his proposals to the obvious need to improve education standards. His reference to a guaranteed minimum income passed almost unnoticed.

Mr Guindos fittingly described growth as the only way for increasing labour demand. He also rightly underlined that credibility stands as the cornerstone of any sound economic policy. But his sensible remarks were brushed away in the ensuing piecemeal wrangle over unemployment, taxes and pensions. A disconcerting battlefield leading the audience to infer that the right-wing might reduce taxes, should fiscal consolidation meet its target, while the left-wing parties would raise them. No other policy measure emerged in this pitched and baffling debate.

Mr Sevilla tried hard to disengage himself from Podemos and undertook a rather convincing attack on the incumbent government’s record. But his proposals failed to fly, laden with too many ambiguities. He lost a fair chance of revitalising the Socialist option. Mr Garicano also missed his target by delivering policy recipes lacking any substance. Mr Guindos achieved his goal of resisting the combined onslaught from the other contenders. His rather fair performance overcame a biassed account from the moderator on jobs, while he sharply reacted to the constant sniper’s fire all along the debate.

Mr Garzón succeeded in presenting his extremist platform in a moderate envelope. Only Mr Sevilla challenged him on the recent communist manifesto calling for abandoning the Euro and the EU, a claim swiftly dismissed. The Podemos representative was able to exhibit himself as a reliable and respectable contender, largely unmolested even when he advocated a massive tax increase amounting to 3% GDP per year. By achieving to escape unscathed, he undoubtedly won this match.

One wonders why a panel of seasoned economic journalists did not monitor this debate, asking the embarrassing questions no participant would willingly take on board. Such an ill-conceived set-up can only deliver a flawed result.