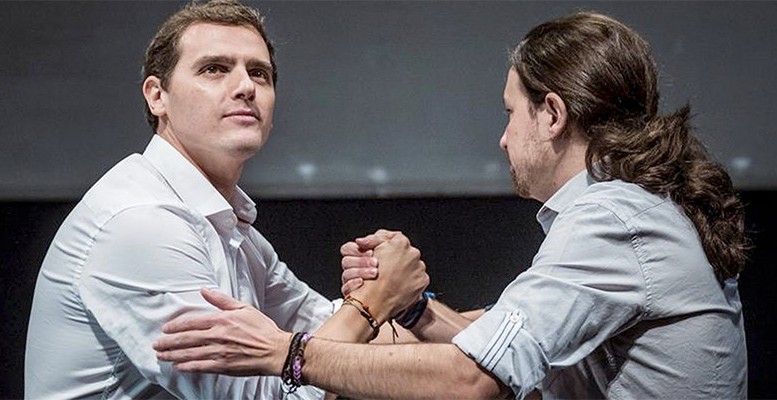 Last night, the leaders of the Ciudadanos and Podemos emerging parties joined forces to deliver a scathing bashing to the Socialist candidate during the debate held as a foretaste of the Spanish General Elections on December 20th. Spanish Prime Minister Rajoy judiciously declined the invitation to assist at the expected slaughtering.

When you have never been in office, you can boast a clean record. And so both of the fresh new leaders lectured Mr Sánchez about the massive mistakes the former Socialist government committed, not to mention the scandals involving his party. He was the target of constant shelling from right and left. That said, Mr Sánchez escaped largely unscathed. He proved a more experienced politician, skilfully exploiting the room for manoeuvre offered by his opponents. He even reacted by delivering some ill-intentioned remarks which baffled both Mr Rivera and Mr Iglesias. By surviving such intense scrutiny, he proved to be better equipped for the job even if he hardly mentioned any new measures. He confined his intervention to reminding his audience of the progress made under Socialist rule some 30 years ago. Much to his dismay, people following the debate seemed more attracted by the promises put forward by his fellow contenders.

The Centrist leader, Mr Rivera, provided a comprehensive outline of his electoral programme. But he overloaded it with too many minute details which clouded his overall performance. Few ordinary people understood the added value he was offering. But for all his shortcomings, he emerged as a young leader capable of reassuring both centre-right and centre-left voters.

Mr Iglesias skilfully played down his radical dogma, presenting himself as the heir to the true social-democrat heritage. By attacking the vested interests and their connection with politics, he garnered wide support from the audience. Nonetheless, his pledge for an independence referendum in Catalonia and everywhere in Spain will not raise much enthusiasm outside the nationalist regions.

Right now, four parties still have a chance to claim victory in the General Elections. The incumbent right-wing party prefers to focus on their old, familiar opponents the Socialists, fearing that a direct clash with Ciudadanos might bolster support for this party. As many people have doubts about where to cast their votes, they are betting that a direct clash between PM Rajoy and Mr Sánchez would force people to choose between the candidate who has overcome the severe economic crisis versus the one representing the party responsible for that plight. But this strategy could be derailed, as people are far from convinced that they are better-off now than four years ago.