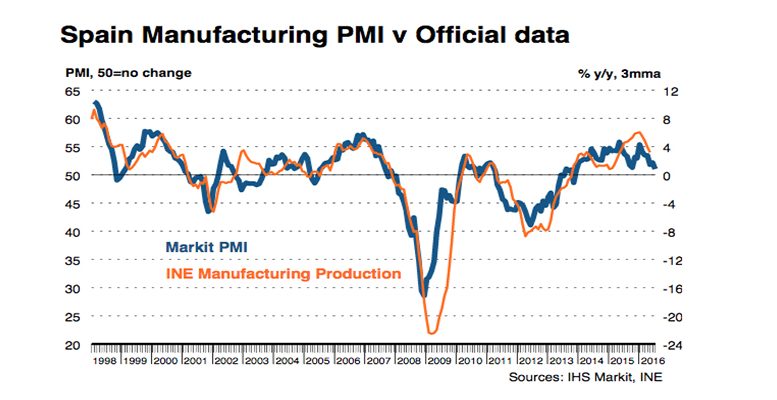 The Spanish manufacturing sector moved closer to stagnation in July as new orders and purchasing activity decreased and output growth slowed (51.0 in July, down from 52.2 in June, according to Markit –Levels above 50 indicate expansion).

Although the rate of production growth in July was the weakest for nine months, output has now risen in each of the last 32 months and companies continued to hire extra staff at a solid pace.

“The general trend towards stagnation seen in the Spanish manufacturing sector since the start of the year continued in July. The drop in new orders should come as little surprise given the previous five months had all seen growth in new work moderate. We mentioned last month that the rate of expansion in output would likely slow if the demand environment remained challenging and we saw production rise at the weakest pace in nine months in the latest survey. There seems at present little sign of any impetus to growth returning,” senior economist at Markit Andrew Harker commented.

Input costs rose for the third month running in July, Markit reported. Although the rate of inflation picked up from the previous month, it remained modest and was weaker than the series average. A number of respondents to the firm’s survey noted higher steel costs. Output prices also increased, ending a 12-month sequence of decline. While some panellists reported that the passing on of higher input costs had led to a rise in prices, others had lowered them in an attempt to fuel new business.

Eurozone manufacturing growth also moderated in July (52 in July, down from 52.8 in June) driven by the above-mentioned contractions in Spain, as well as declines in France, Portugal and Greece.