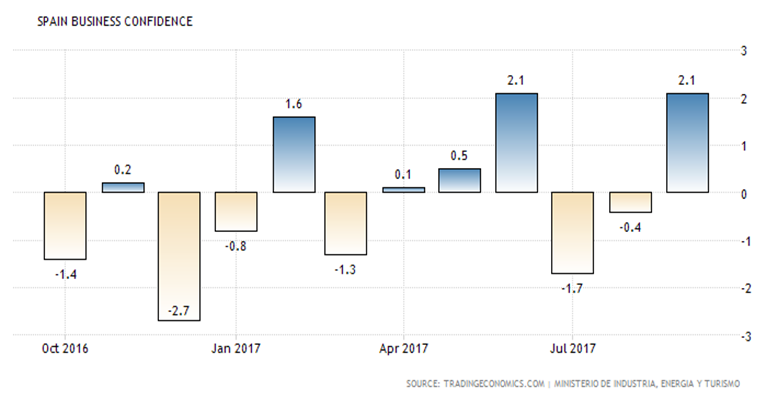 Spain’s services sector, about 50% of the country’s GDP, was boosted in September thanks to new business at the fastest rate in more than two years, according to Markit’s Purchasing Managers’ Index (PMI). This index for service companies rose to 56.7 in September from 56.0 in August. The index has held above the 50 line separating growth from contraction every month since October 2013.

“The strength of client demand shone through in the latest Spain services PMI, with new business increasing to the greatest extent in more than two years,” said Andrew Harker, senior economist at Markit.

Rising workloads encouraged companies to increase staffing levels again, while stronger client demand enabled another rise in output prices, with the rate of inflation among the fastest in the past decade, he added.

After growth in the manufacturing sector expanded at the fastest pace in three months in September, according an earlier Markit survey, the services figures point to a positive end to the third quarter, Harker said.

Companies included in the Markit survey said they generally expect business conditions to strengthen further over the coming year, supporting growth of activity.

The Bank of Spain said last Thursday it expected quarterly gross domestic product to have expanded by 0.8 percent in the July to September period, down slightly from 0.9 percent the previous quarter.

The sub-index for new business in the services sector rose to 58.3 from 57.1 in August, reflecting the strongest growth since August 2015.