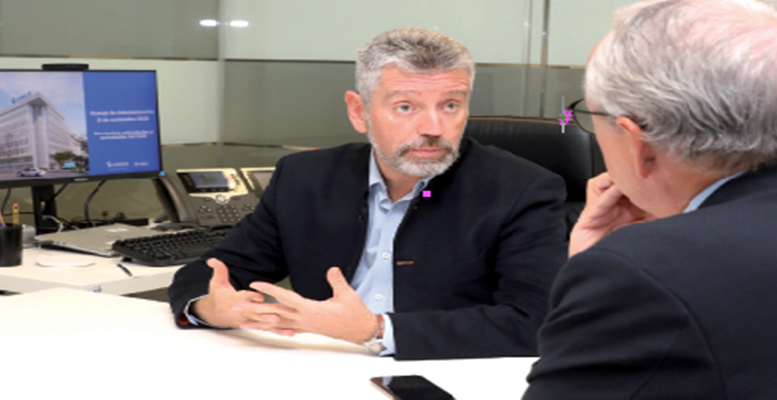 Q- How does a company like CESCE, which operates in many countries, view the geopolitical risk map?

A- Geopolitics is currently setting the economic agenda, as the world is in great turmoil; there is no region, not even Europe, that is free. We see the rise of populism, parliamentary fragmentation, social instability, and a whole host of other factors. And we see something we haven’t seen for a long time: first-rate war risk in Europe, something that affects everything, security, politics, energy or inflation. A little known example: German factories subcontract wiring for cars from Ukraine: a modern car carries four to seven kilometres of cable. And the well´-known fact that a large part of the grain, corn and sunflower oil comes from Russia and Ukraine. And we are very dependent on their energy, as we have become dependent on Russian gas. All this means that, however much the company controls its economic risks, it is affected by an extraordinary country risk. Hence the importance of having these types of risks covered, which are covered by credit insurers on their own account in some cases and on behalf of the state in others. We have supported all our clients in Russia, in Ukraine and in Algeria and all those who were covered by our insurance have been paid.

Q- Geopolitical risk is now more important than economic risk.
A- Yes, significantly. Economic risk is important in highly indebted countries, which are seeing their solvency deteriorate. There are some 13 in debt distress – a critical situation in international payments – and some 43 more that are at high risk of default according to the IMF. Governments and companies have emerged from Covid19 heavily indebted. There is a tendency to forget that in Spain we entered the pandemic with a debt of 100% of GDP and came out with 120%. And there is a tendency to forget that this 20% is approximately the amount of the rescue package, which is a debt that has to be repaid. And we also forget the corporate debt. Now you have to be very careful who you sell to. The risk of commercial default is growing little by little but not like the tsunami that was expected when the ICO moratorium ended. There hasn’t been one. It is more of a slowly rising tide.

Q- Only 30% of Spanish companies hedge their sales risks.
A- In reality it is a slightly higher percentage. Although it may seem low, we are one of the countries where credit insurance is most developed. In any case, it is very common not to cover sales. Companies sell short and tend to rely on the solvency of the buyer. The difference between a solvent buyer you know and an insolvent buyer is the telephone: the buyer you know who cannot pay you will call you and apologise. But in the case of the one you don’t know, you will call and they won’t pick up the phone. But if they can’t pay you, no one is going to pay you.

Q- How do you see foreign risk management for Spanish SMEs?
A- Spanish companies are much more professional than one might think. It is a fact that Spain has a worse image among Spaniards than among foreigners. The EU country that exports the most in terms of GDP is Germany, and the second, including goods and services and tourism, is Spain. We are leaders in many sectors and our internationalised companies, more than 150,000, are highly professionalised: you don’t just go out and compete in the world, there is a lot of work behind it. And in risk management, too. There is still potential for improvement in smaller companies and in those companies that believe that credit insurance is a cost they can save. They are wrong. Insurance premiums are very low and represent only a few tenths of the insured sales, and in return they give you a lot of security. In our case, both on behalf of the state and on our own account, we generally indemnify more than 90% of the insured amount, which gives you a lot of security. But insurance and our complementary management systems also help you grow and sell better.

Q- CESCE is majority owned by the state and the rest by banking institutions. What happened to the idea of privatising the company?
A- Privatisation was attempted a few years ago but it was found that the interested buyers were not suitable and privatisation was stopped.

Q- Would such an operation make sense now?
A- In my opinion, no. CESCE is a credit and surety company, but also an ECA (Export Credit Agency) on behalf of the state. In the world you find credit insurers and ECAs of all kinds: private companies, public, mixed, public with private management -like the German ECA-… They work more or less in the same way and we do not see major differences between them. The public-private participation in CESCE seems to me to be optimal. It gives great security and stability. CESCE is a great company, and it is especially exceptional in bad times. We are a company that does not withdraw from the market and does not drastically cut risks. The state bonus is very useful and with 49 years of benefits. Cesce brings money to the state, rather than costing it, via dividends and taxes. I see no reason to privatise it and I don’t see that my private colleagues perform any better.