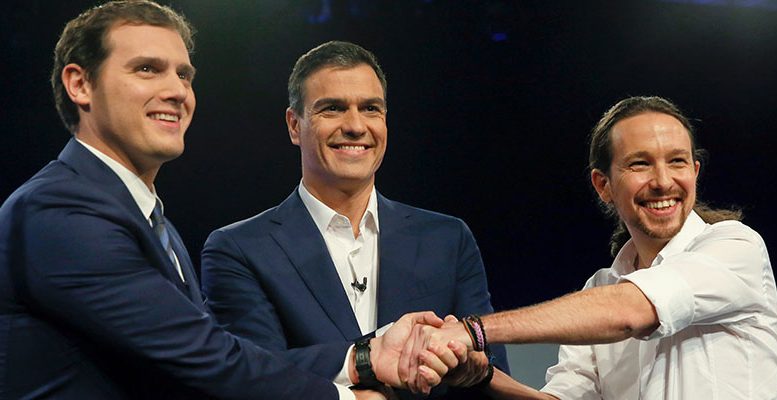 Both the PP and the PSOE are bitterly sorry about the explosion of populism in Spain. A certain degree of populism – proposing measures, including economic ones, which go down well with the population – is almost inevitable and consubstanial in a democracy. The electoral process encourages it.

What has happened in Spain is that the two big parties have excessively abused economic populism and now the social consequences of the worst economic crisis since 1929 have left them in a very bad position in the face of the emerging new populism. But the worst thing is that even today, the two main parties are resorting to an irrational populism, which is disproportionate and refuted by the facts. And this doesn’t help them at all. On the contrary, it strengthens Pablo Iglesias. In a fairy tale competition, it’s easy to choose the one which has more good fairies and tells the best story.

Whilst the economy was doing okay, a certain degree of economic populism did not have too many negative consequences. It was put up with thanks to growth. But the crisis begun in 2007-2008 is a significant breaking point. Because it’s the biggest crisis of capitalism in a century and because Spain was caught up in a rather crazily optimistic dream – due to the property boom – and ill-prepared for the new challenges of re-industrialisation in the global market. Zapatero’s first reaction to the crisis is to think it’s only a bit of turbulence. It’s a crisis involving the US banks which the US will sort out. In the meantime, Spain’s public finances (in surplus at that point) will allow it to wait until everything is back to normal. But in 2010, Zapatero’s tranquility (and that of other European governments and the ECB, which in 2008 was still hiking rates because it thought inflation was the problem) was dramatically undermined. After the Greek crisis the markets were afraid to continue financing a State which had seen its revenues plummet (due to the decline in activity) while its expenses increased. This was the result, amongst other things, of a sharp rise in unemployment.

The PP’s discourse at that point is clearly populist. The crisis is solely the fault of Zapatero’s bad politics and “goings on” – the so-called baby cheque, plan E…- and the economy will recover as soon as the PP is in government as it is the party which knows how to do this.

But after the PP’s victory in 2011, Rajoy’s government has to convince itself that its arrival has not produced any miracle in the markets and that there is no alternative but to raise taxes.

Now it’s impossible for the PSOE to maintain that the labour reform has only had negative effects. Certainly the internal devaluation is hard and brings contradictions. For example, the low salaries do not help correct the worrying Social Security deficit and Rajoy’s government has used up half of the pensions’ so-called “piggy bank.” And it’s a fact that cuts have often been made with more arrogance than care and without taking the social consequences into account.

But the PSOE is taking a very broad brush approach to populism in promising to anul the PP’s labour reform. Now the economy is growing over 3% because one million new jobs in two years (2014 and 2015) fuels demand. No matter that these jobs are temporary or part-time and with lower salaries.

What is more worrying – when the pressure on Spain has decreased more as a result of ECB policy than anything else – is that the ruling party has once again turned to the most shameless electoralism with its fiscal policy. Implementing a fiscal reform with rebates for tax payers when we are still immersed in the EU’s strict adjustment programme – and cutting personal income tax halfway through the year as has happened – has contributed to another failure to comply with the deficit target in 2015 and to fresh conflict with Brussels.

Of course the PP could argue that politics are politics and that the cut in personal income tax in 2015  helped them to salvage their election chances. They might even argue that not “contaminating”  the economy with the 2015 tax reform would only have benefited Podemos at the polls. Arguments can be made about everything but it is not serious. And in economy what is not serious usually has negative consequences.

And what is more scandalous is that now, in full electoral campaign, Rajoy is again promising another cut in taxes almost immediately when the first task of the new government – whoever is at the head – will be to start negotiating with Brussels (worried by the Spanish government’s oportunism) about a new adjustment programme and another delay in complying with the 3% deficit target.

Rajoy does not understand that when the government promotes populism, cutting the taxes in an electoral year which it increased in 2012, and promising new cuts which will be difficult to execute at least while talks are ongoing with Brussels over new spending cuts, it is obliging the PSOE to slide down the same staircase of irresponsability.