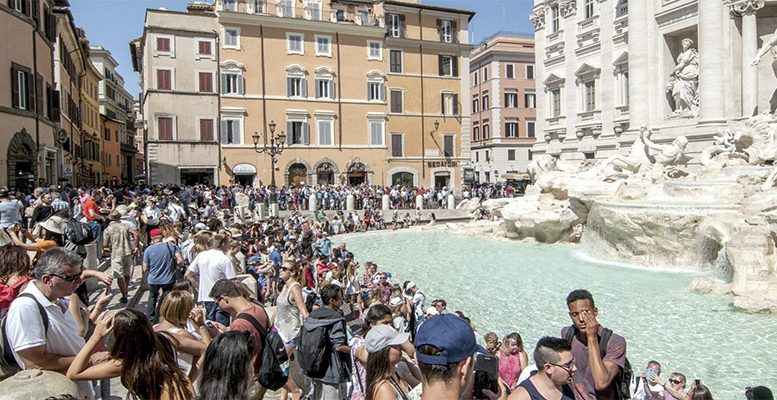 Intermoney | The health crisis has hit Italy, already a country with one of the weakest economies on the continent. In fact, its GDP in year-on-year terms is stagnant and its Q4’19 levels were slightly lower than those registered at end-2017. Looking ahead, the country’s GDP entered 2020 with a negative drag effect of 0.2%; in other words, if the GDP data were to remain stagnant throughout the year compared with Q4’19 figures, the Italian economy would decrease by -0.2% this year.

The problem for the Eurozone is that Italy is the third economy in the area, representing about 15% of its GDP, amounting to 1.7 billion euros in 2019. So if there is a decline in activity in the region in Q120 as a consequence of the latest events, it will at the very least hit the tourism sector. This is a strategic sector for the country as the figures show. For example, the positive balance of tourism in the 2018 balance of payments stood at 16.22 Bn €, equivalent to 1.4% of GDP. But this figure is biased and underestimates the sector’s relevance. According to the latest aggregate Tourism Satellite Account from Eurostat, we can highlight that tourism consumption in Italy amounted to 146.33 Bn€, distributed as follows: domestic tourism 64.23 Bn€, foreign tourism 48.14 Bn€ and other tourism components 33.95 Bn€.

So the drop in tourism will take its toll on the Italian economy. That said, other European partners must be more worried about the potential upheaval in the country’s industry: the second largest in Europe. Italy’s manufacturing industry is a sector worth more than 260 Bn€, accounting for 15.5% of domestic GDP. But the key for its European partners is that almost a third of its production is intermediate goods. Therefore any disruption in Italy’s manufacturing activity would generate major upheaval for the European manufacturing industry. Furthermore, the bulk of the coronavirus cases are unfortunately happening in the north of the country: the Italian industrial heart.

As for the most affected activities on a global scale, international tourism would be the first on the list. In 2018, this activity generated exports worth 1,717 Bn$ throughout the world (tourist spending 1,462 Bn $ and transportation 256 Bn$). This is equivalent to 7% of world exports of goods and services based on data from the World Tourism Organization .

To a great extent, the relative importance of international tourism varies, depending on the region. For example, in Europe tourism exports accounted for more than 6% of the total, standing at 688 Bn $. Meanwhile in Asia-Pacific, they were around 6% (487 Bn$) and in America 9% (392 Bn$). These are figures which, in 2019, will have undoubtedly increased in terms of income, given that the number of international tourists rose from 1,407 million to 1,461 million (+ 3.84%).

In summary, tourism has become a key activity for many countries. In fact it not only represents 7% of exports worldwide, but this figure increases to 30% in the case of services. In this context, the big problem is that the normal evolution of international tourism flows has been called into question. And in particular from such a dynamic market as Asia. For example, in 2018, Chinese international tourists spent 277.3 Bn$.

Unfortunately, doubts over international tourism are gaining momentum, accounting for about 2% of world GDP. At the moment, there are already reports which suggest that the slowdown in tourism in Asia, though not just international tourism, can subtract just over 100 Bn $ from the continent’s economic activity.

The afore-mentioned numbers prompt us to look at Spain, where tourism is a key industry which will not be immune to the latest events. However, rather than calculating the uncertain impact of the coronavirus, we prefer to provide data regarding its relevance for our GDP so that each person can draw up his/her own scenarios. According to the 2018 Tourism Satellite Account of Spain, published last December, the contribution of tourism activity to GDP was 12.3% that year (€ 147.9 billion) and, in terms of employment, 12.7% (2,62 million jobs).