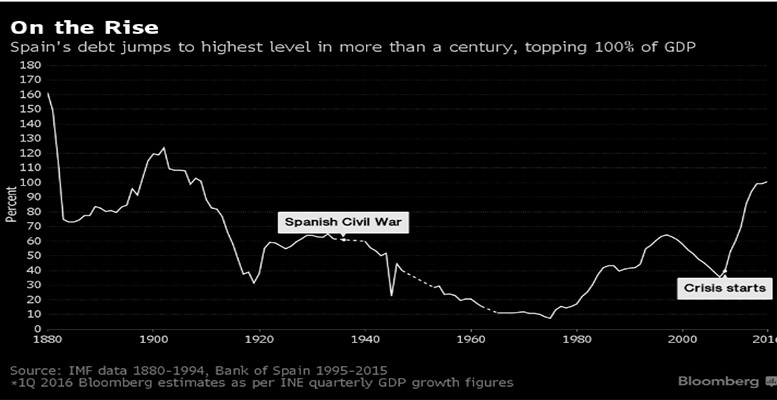 It has been revealed this week that Spain’s public debt has exceeded 100% of GDP for the first time, reaching 1.095 billion euros. According to the Bank of Spain, this figure represents about 101% of GDP. Almost at the same time, Bloomberg published a graph showing that this level had not been seen since 1909, as well as the level of debt during the Spanish Civil War. With just one month to go to new elections in Spain is this graph oportunistic?

Analysts consulted by The Corner don’t think so. The figure doesn’t mean anything. According to Antonio Zamora, head analyst at ACF:

“The data is only interesting in as far as it’s a round figure. It was already known that Spain’s debt was close to 100% of GDP and it was on the cards that this year it would be slightly above that level, which is not substantially higher than the European average.”

And indeed Spain is not the only European country in this situation. Portugal’s debt is 129% of GDP, while Italy’s is 132.7%. France is moving towards Spain’s figures with 95.8% of GDP.

Greece has 311.452 billion euros of debt, representing 176.9% of GDP. Germany is the only European partner with debt levels far removed from the psychological barrier of 100% of GDP: 71.2%.

The UK is also not free of debt. With one month to go to the Brexit referendum, its debt stands at 2.265 trillion euros, or 89.2% of GDP.

In any event, the reasonable view is that this figure will stop growing this year, starting to decline over the coming years. Estefania Ponte, director of analysis at BNP Personal Investments, explains:

“We expect this to be one of the last months where we see an uptick in this ratio. Although below the government’s target, the public deficit has fallen this year. Looking ahead, the public debt ratio/GDP should fall to 98.2% in 2016 and to 97.2% in 2017.”

The government’s full-year debt target is 99.1% of GDP, in line with the latest stability programme.