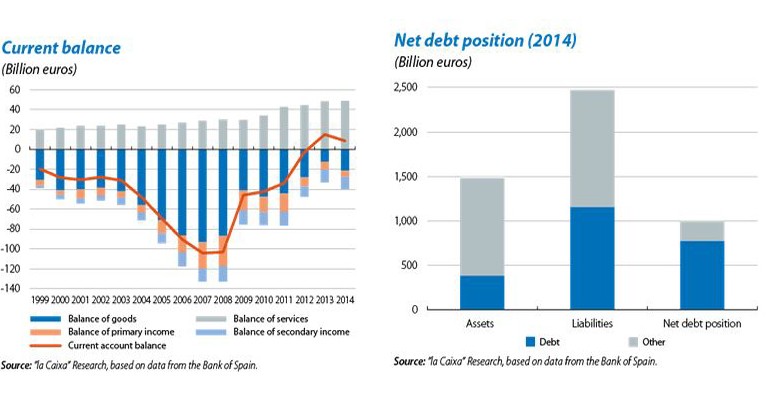 One of the factors contributing the most to the improvement in the current balance over the last few years has been the correction in the balance of primary income, going from a deficit of more than 30 billion euros in 2008 to a deficit of just over 6 billion euros in 2014. This improvement accounts for 25% of the change seen in the current balance, an additional factor that helps to put into perspective the importance of the trend in the balance of primary incomes for the Spanish economy.

This change in the income account partly reflects the situation affecting the Spanish economy over the last few years. Given that Spain’s economic situation has been particularly adverse, investments made by foreign individuals and firms in the country have had lower returns than Spanish investments abroad, a factor that is particularly relevant for portfolio investments and direct foreign investment.

However, this trend now looks like changing: as the recovery of the Spanish economy gradually gains traction, the returns on investments in Spain will also grow, benefitting international investors. Naturally this circumstance will be reflected in the income account and will undo part of the improvement seen over the last few years.

However, in the short and medium term the decline will not be total. The trend in debt premia will help payments by the Spanish economy to the rest of the world as interest rates will remain at very low levels over the next few years. This trend is crucial for the performance of the balance of primary income as 47% of all liabilities held by Spain in relation to other countries are in the form of debt.

By way of example, we expect the risk premium for Spain’s 10-year public debt to stand at 1.7% on average in 2015, 1 pps below the level posted in 2014. This drop in the cost of debt will provide savings of approximately 2 billion euros.

Nevertheless, it is important to note that this source of support for the Spanish economy is temporary. As interest rates normalise, something we expect to happen as from next year, the cost of debt will increase.

Any permanent correction in the balance of primary income should come from structural factors such as higher surpluses in the balance of trade of goods and services, resulting in a lower net debt position for the Spanish economy and consequently lower payments to the rest of the world.