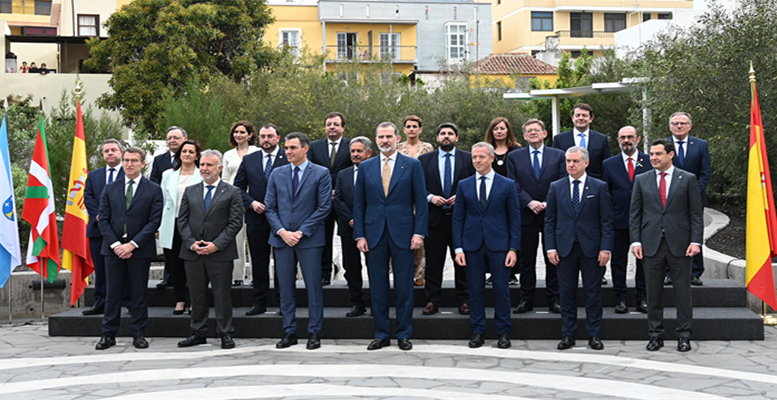 The King, the President of the Government and all the regional presidents, including the new leader of the PP and President of Galicia, Nuñez Feijoo, second from the left.

Yesterday, during the meeting of the Summit of Autonomous Community Presidents held on the Canary Island of La Palma, Prime Minister Pedro Sánchez proposed a change in his fiscal policy by proposing a tax cut, set out in the so-called Declaration of La Palma. Sánchez has not specified what this tax cut the government is working on will entail. He has limited himself to assuring it will alleviate the “sectors most affected” by this new crisis.

Tax cuts to contain the galloping rise in energy prices was the main proposal with which the new leader of the Partido Popular and President of the Xunta de Galicia, Alberto Núñez Feijóo, attended the summit. He valued the fact that the Conference produced a “useful” joint declaration of support for the Government’s foreign policy. However, he regretted that the tax cuts, with deadlines and recipients, had not been specified.

Nuñez Feijóo supports the declaration as a whole, which also expresses support for the Spanish Government in its position before the next European Council to be held in Brussels on the 23rd and 24th of this month. It calls for the adoption of measures to achieve a reduction in energy prices. Also an agreement to promote the implementation of European funds by all public administrations, leaving aside partisan disagreements on this issue.

The Prime Minister has pointed out that the Russian invasion is going to be long and runs the risk of becoming chronic. This is the main reason why he has had to change his strategy of raising taxes, which was planned for this year, with the comprehensive tax reform, in which the tax burden on fuel was to be raised even more.

A few days after the committee of experts – chosen by the government – presented the diagnostic white paper on the Spanish tax system, which proposed a generalised increase in most taxes, Sánchez has announced there will be no increases, but rather reductions.

The final declaration from the regional summit was signed by all the participants in the Conference, in which the central government, the presidents of all the autonomous communities and cities and the president of the Spanish Federation of Municipalities and Provinces took part. It “condemns in the strongest terms” Russia’s “illegal, unprovoked and unjustified” military aggression against Ukraine.

According to the final document, the government and the regional leaders agree to intensify tax reductions to cushion the impact of energy prices on the bills paid by families and businesses. And other reductions that may be considered in this regard.