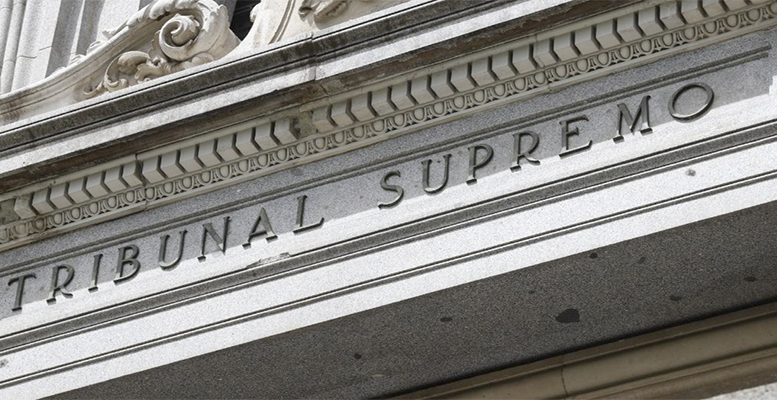 “Never again Spaniards will have to pay the mortgage stamp duty”. With these words the Spanish president Pedro Sánchez announced a decree law and gave a new twist to the story of who should be responsible for this tax, just a few hours after the Supreme Court decided that it will be the customer’s duty. The way in which the High court has managed the decision making process has put its credibility into question.

After losing 10.4 billion euros in stock market capitalisation since 17 October, Spanish banks were recovering in the stock market after learning on Wednesday of the Supreme Court sentence which decided that it would be the customer who would paid mortgage stamp duty. Then the government’s decision was known.

According to Morgan Stanley, the new norm will provoke an increase in the price of mortgages of 7-8 b.p. Its analysts believe that the banks will transfer 50% of this to the client, which will represent 1-2% of PER, “but” they comment, “by spreading it out over the whole life of the loan the impact in the PER 19 will be minimal”. For their part, the preliminary calculations of Alphavalue talk of a cost of some 640 M€ or -3% in the profits of the sector. Nevertheless, for Intermoney, “the decisive aspect will be the intensity of competition between the entities which will what, really, defines the real cost of this measure for the banks.”

In any case, and as many analysts insist, given that it will not be retroactive, the banks will find some way of passing the cost onto the client, at least partially.

For now, the sector will remain paralysed until the changes take effect and the outlook is clarified. 2018 will close with an increase in loans of close to 1% and in 2019 the Spanish banks will see a gradual improvement in this. In the second quarter of 2019 the growth will slowly increase but the NII (net interest income) will not increase too much if the ECB does not increase interest rates until the second half of 2019. Morgan Stanley says that Santander will be the Spanish bank whose NII wil improve most (+6%) thanks to the changes in the 123 account and Caixabank will improve +4% because of a larger market share.

The decision of the plenary of the Supreme Court came also as a surprise on Wednesday, given that the base scenario held by investors was that the banks would have to pay the stamp duty, with the only doubt being whether it would retrospective. Finally the the plenary of the third court decided by 15 votes to 13 that it is the client who has to pay the stamp duty, the criterion that has been in effect for over 20 years. The 28 magistrates had rejected the three appeals launched by the Municipal Housing Company of Rivas, identical to three other appeals already rejected on 18 October.

None of the opposition political groups, PP, Ciudadanos and Unidos Podemos, had shown themselves in agreement with the Supreme Court’s decision. The left wing group led by Pablo Iglesias even called for civic demonstrations “to defend the interests of the majority against the privileges of the minority.”

Nevertheless, we have to take into account that the new mortgage law is being debated in Congress which will adopt the European norms fixing which costs should be paid by the bank and which by the client (the new law could be debated on 19 November).

The Spanish banks’ share price increased at Wednesday´s opening by more than 5% and closed more moderately at 2.5%. The relative weight of the sector in the Ibex is high, around 35%.