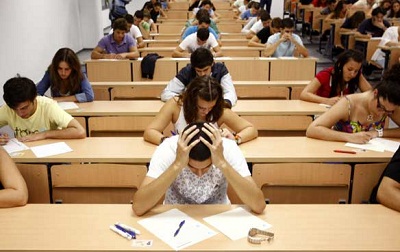 MADRID | University students in Spain who fail more than half of the subjects they enrolled for will have to return the full amount of their awarded scholarship. A royal decree that sets the thresholds of income and family assets and the amounts of grants and financial support for the 2012-2013 academic year came into effect Monday after its approval by the Spanish cabinet.

Before the changes, it was required that the student attended exams for a third of those credits. The minister for Education José Ignacio Wert said in the press conference that students need to match their work with

“the effort taxpayers have to endure” to finance scholarships. Wert remarked, too, that “despite the circumstances, the government maintains in full the 2011 level of financial aid.”

Conditions will be even harder in the future, though. For the 2013-2014 academic year, access to a general scholarship including tuition will require an average score of 6.5 points. For its renewal, students will need need to pass all modules, apart from Architecture and Engineering, with an 85% barrier.

The Spanish government had argued in favour of a minimum of 6 points to be awarded a salary grant next year, which includes tuition and a stipend for students to study full time, but students will finally need only 5.5 points. University students will need the same initial marks whether they apply for a general scholarship or a salary grant.

For students pursuing a master's official title, the decree states that for a general scholarship in the first year, they will need to have obtained an average score of 6.5 points in previous studies, and 6 points in the case of a master's degree that prepare students to pursue a regulated profession, like teacher.