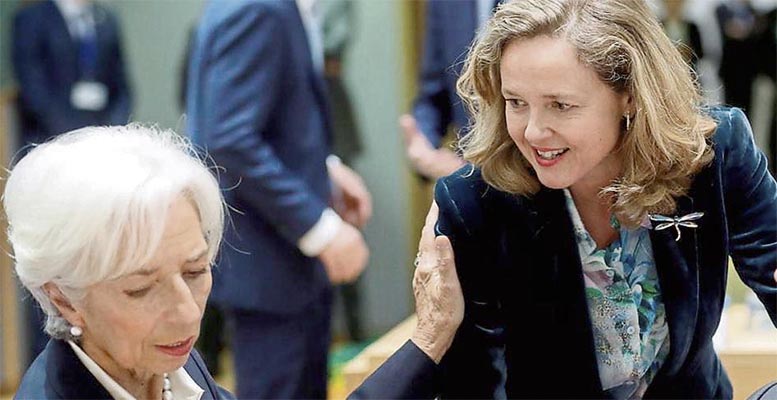 Joan Tapia (Barcelona) | The defeat in the Eurogroup indicates that Spain is not gaining influence in Europe, but it will have little impact on economic policy.

Spain needs a budget, as the country continues to operate with the one that the previous government managed to approve in 2018, shortly before the fall of former Prime Minister Mariano Rajoy. No matter how few conditionalities Brussels imposes, it would be impossible to demand European funds and aid without having a budget for 2021. And Spanish public opinion (the solvent and informed, which is not all) put great hope in the fact that if Economy Minister Nadia Calviño was elected president of the Eurogroup, it would be easier for Spain to have a viable budget and for European aid to be granted more easily.

In the end, Calviño (also a deputy Prime Minister) had only nine of the ten votes needed and ended up losing out to Irish Minister Pascal Donohoe of the EPP’s European family.

What effects will Calviño’s defeat have? At the European level, I believe that it will not be excessive. That said, the presidency of the Eurogroup would have given Spain (along with the vice-presidencies of Josep Borrell in the Commission and Guindos in the ECB) an influence in the EU institutions more in line with its share of GDP. But the recovery plan (and its implementation) does not depend on the president of the Eurogroup. What Calviño’s defeat – despite the support of Germany, France and Italy – does show is that this recovery plan will be hotly debated. Also that there are many countries, beyond the four frugal ones (Holland, Austria, Sweden and Denmark), that want to negotiate the terms of the plan, which will be a substantial innovation in the operation of the EU. The fact that Italy and Spain have won the support of Germany does not mean that the ten countries which voted for Donohoe will accept everything agreed between Berlin, Paris and Brussels.

In Spain, it is clear that there will be political noise. The opposition parties will repeat that we are facing the umpteenth failure of Pedro Sánchez and that Nadia Calviño is affected. So her importance in the budget project (as opposed to another deputy Prime Minister, Pablo Iglesias, from the leftist party Unidas Podemos) will be less. There may be some of this, but I believe it will be a case of “much ado about nothing.” Sánchez will continue because he is the only possible Prime Minister with this parliament. The budget will also have to be approved with the votes of the centrist Ciudadanos and take into account the European guidelines. It is not possible to ask for 140 billion euros (financing from the ECB apart), without considering what is seen as appropriate and convenient in the European capitals. No matter what the most radical ministers think.

Therefore, Nadia Calviño, perhaps with fewer stars on her uniform, will continue to be a key player not only in the 2021 budgets but in all economic policy. And Unidas Podemos will have to accept this. Pablo Iglesias has already said he is not opposed, although he does not like it, to negotiating with Ciudadanos. But without approved budgets, the government will find it very difficult to survive next autumn-winter.

Spain has lost out in the Eurogroup, but only by 10 to 9 and with the vote in favour of the powerful Franco-German axis. It is an honourable defeat that indicates our limitations. Some have been quick to claim that the result is due to the fact Spain has a government with communist participation, something anomalous in Europe. Of course the participation of Unidas Podemos is not a positive thing for the finance ministers of the EPP. However, I do not think that is the key factor here. It is a warning from the medium-sized countries to the Franco-German axis to take them more into account. And to the countries of the south: we will help, but on top of this do not dictate the conditions.