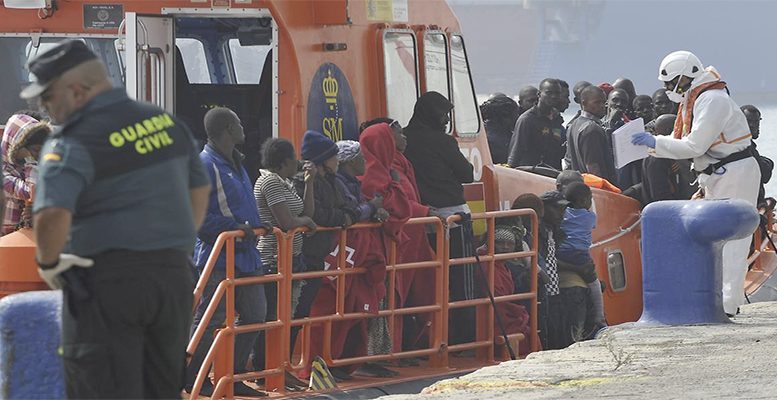 Spain may not be the most common point of entry for most migrants and refugees to Europe – last year it received only two percent of arrivals – but it does seem to be facing increasing challenges in this area.

Italy and Greece are currently the EU’s main arrival points, but Spain has a unique geographical status for migrants. The Canary Islands, off the west coast of Morocco, are Spanish and therefore offer a convenient route into Europe for Sub-Saharan Africans. Also, Spain has two cities on African territory, Ceuta and Melilla, each perched on the North African coast and bordering Morocco. Migrants who can scale or breach the six-metre-high triple security fence surrounding those cities, or swim or navigate round them, also find themselves on European territory.

But in recent years, security has been tightened and both those routes have become more difficult for migrants.

Spain and Morocco cooperate to control the Ceuta and Melilla borders, where infra-red cameras have been installed and razor wire covers many parts of the fences.

Meanwhile, arrivals to the Canary Islands have plummeted from around 30,000 a year a decade ago to just a few hundred. That follows another programme of cooperation, which has seen Spain send civil guards to Mauritania and Senegal to help patrol the coastlines. Madrid has also invested in development in those countries of origin.

But the problem is that successfully closing down one route means opening up another – thus the thousands of Africans now crossing the Mediterranean from Libya, and the thousands who die on the way. And the Spanish mainland is another destination that is currently seeing a sharp upswing in numbers. Cities like Málaga and Tarifa, on the south coast, are currently struggling to manage arrivals, which so far this year have doubled those of the equivalent period in 2016.

In June, Málaga had to open up a local sports hall for a few days in order to house a sudden influx of Sub-Saharans, with local charities such as the Red Cross and Comisión Española de Ayuda al Refugiado (CEAR) unequipped to do so.

Despite the tireless work of these organisations and the coastguard, on July 4th, 49 people were drowned after setting off in a boat from the Moroccan coast in the hope of reaching Spain. There were only three survivors.

Juan Antonio Menéndez, head of the Spanish Catholic Church’s migratory commission, declared that the tragedy showed “once again the need to work to reach a minimum accord between countries that guarantees safe immigration, without risk for human lives.”

If that is not painfully obvious, then a glance at the statistics makes it even clearer: more than 5,000 people died trying to cross the Mediterranean to Europe last year and 40,000 are thought to have drowned this century.