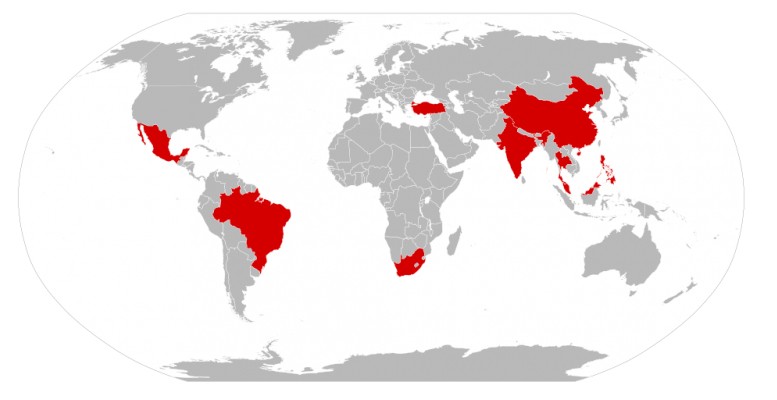 Alberto Forchielli via Caixin | The BRICS, MINT and others are nice, but CIVET is better because it has Vietnam, the happy exception to recent slowdowns. Rarely has there ever been an acronym more fortunate than the BRIC group. Starting in 2001, when Jim O’Neil from Goldman Sachs synthesized Brazil, Russia, India and China, followed later by South Africa, the term began appearing in economics publications and everyday language. Soon it became synonymous with emerging markets, a relentlessly growing web that threatened to undermine the industrial world’s primacy.

The success of the acronym was institutionalized, and since 2006 the five heads of state have met to discuss politics and even gave life to a bank that – at least in its intentions – flanks multilateral banking institutions. The synthesis was followed by two attempts at sequels, both by the same authors: the Next Eleven in 2005 and the MINT, for Mexico, Indonesia, Nigeria and Turkey, in 2013.

In any case, the acronyms now seem rusty. Emerging countries are limping along and frequently don’t meet expectations. It’s not a matter of the illusions of international investors as much as a failure of government. The BRICS in particular are suffering worrying slowdowns and declines.

The reasons for this are many and varied: from sanctions imposed on Russia to internal Chinese politics, from the Brazilian recession to India’s unrealized hopes. Even in their diversity, a common yet bitter and alarming data point emerges: These countries were not capable of self-reform and lacked the courage to question experimental methods.

The resources accumulated over years of development could have been used to dismantle old apparatuses and dysfunctional bureaucracies, and to open structurally to globalization. Instead, continuity prevailed and exacerbated political tensions that did not help development. Troubling nationalism has caused strong tensions.

Today, Vietnam is one of the few showpieces among emerging countries. The Southeast Asian country is stable, attracts investments and continually improves the living conditions of its population. For multinationals, it’s a valid alternative to China, where increases in the cost of labor have stimulated businesses – foreign and Chinese – to delocalize toward neighboring countries. Even the recent devaluation of the yuan has proved to be an advantage because Chinese competition – more inexpensive on paper – is compensated for minor import costs by Beijing.

Vietnam’s trade negotiations with the European Union and inclusion in the Trans-Pacific Partnership – the free-trade agreement resting on the pillars of the U.S. and Japanese economies – also create a strong magnet. Vietnam’s GDP will reap the benefits; it is expected to grow by 6.5 percent this year and 7 percent in 2016. In addition, exports are increasing more than in any other Far Eastern country – including China.

Finally, the image of Vietnam’s economic capital, Ho Chi Minh City, is changing: automobile numbers are increasing at the expense of motorbikes, and new skyscrapers tower over the financial district. Therefore, Vietnam is a happy exception to the woes of emerging markets. Among popular acronyms, it would have been more prescient to favor the Economist’s CIVETS from 2009. Its members are Columbia, Indonesia, Egypt, Turkey and South Africa, and unlike other acronyms it has a V for Vietnam.