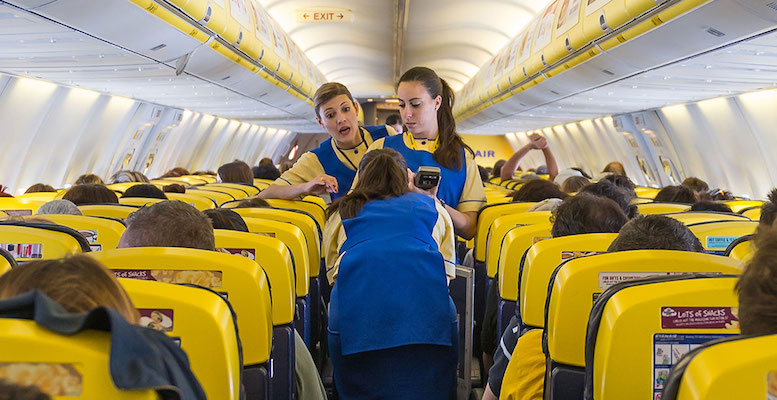 Airline staff today are certainly willing to negotiate alternatives, as demonstrated at Ryanair

Geraint Harvey, Daniel Wintersberger, Peter Turnbull via The ConversationUK |The coronavirus pandemic has been especially cruel to the aviation industry. COVID-19 had an immediate and severe impact on aviation that is unlike any other shock in the industry’s history. Whereas the 9/11 terrorist attack on the twin towers undermined confidence and disrupted passenger flights and the financial crisis was hard on airlines, neither of these events come close to the damage inflicted on airlines from global lockdowns.

When airlines don’t fly, they incur heavy losses. The health of the passenger airline industry is measured in revenue passenger kilometres (RPK). This represents the number of kilometres travelled by paying passengers. As data presented by the International Civil Aviation Organisation show, passenger traffic drops sharply after a crisis, but it usually only takes a couple of years before there is significant growth.

While the losses of airlines worldwide stood at US$26.1 billion (£20.5 billion) in 2008, the following year losses were just US$4.6 billion and in 2010 the airline industry was back in the black with net profits of US$17.3 billion. Predictions for 2020 and 2021 follow a similar but more severe pattern of minus US$84 billion and minus US$15 billion, respectively.

Perhaps unsurprisingly, several airlines have announced sizeable redundancy programmes as a result. British Airways says it plans to make up to 12,000 staff redundant and reduce the terms and conditions of 30,000 others. Meanwhile easyJet announced cuts of 4,500 jobs in June and Ryanair of 3,000 in May.

Asking the workforce to bear the brunt of falling demand may save the airline in the short-run but it will hurt relationships in the long-run. In fact, relationships have soured already as job cuts come on the back of very healthy pre-tax profits in 2019. IAG, the parent company of British Airways, posted pre-tax results of £2.6 billion, easyJet £0.4 billion, and Ryanair £0.9 billion.

Terms and conditions of employment in the airline industry in Europe have deteriorated in recent years. This has been the result of intensified competition within Europe’s single market for aviation services, most notably as a result of the increasing market share of low-cost airlines such as Ryanair, easyJet and Wizz.

As labour represents one of the few variable cost that airlines have immediate control over – unlike fuel, aircraft, landing charges and the like – many, but by no means all, tend to move quickly to reduce these costs in the event of a sudden downturn. This was certainly the case after 9/11 and the financial crisis.

The new redundancy plans may not come to fruition. They might be used instead to browbeat staff and secure further concessions from them, as has happened in the past. Pilots at Ryanair, for example, recently voted in favour of a 20% pay cut in order to save 260 pilot jobs at the airline, which were part of the cuts it announced in May. The pilots have negotiated that pay will be restored to pre-COVID-19 levels within four years (which would still constitute a pay cut due to inflation).

There is an alternative

Previous crises show that there are viable alternatives to job cuts. Following the 2008 financial crisis airlines like Southwest adopted a wider range of measures including work-sharing, temporary pay cuts and furlough. As a result, they were less likely to experience industrial strife and the business recovered more quickly.

Airline staff today are certainly willing to negotiate alternatives, as demonstrated at Ryanair. COVID-19 might hit harder and last longer than previous crises, but the industry will not disappear. Indeed, the majority of participants in a recent poll of aviation professionals predicted a return to 2019 levels of revenue within three years.

The big question is what the recovery will look like for the workforce. Will the European aviation sector continue to offer decent work for the 2 million people who currently work in it, or will jobs in this sector go the same way as precarious gig work, which now characterises so many other sectors of the economy?