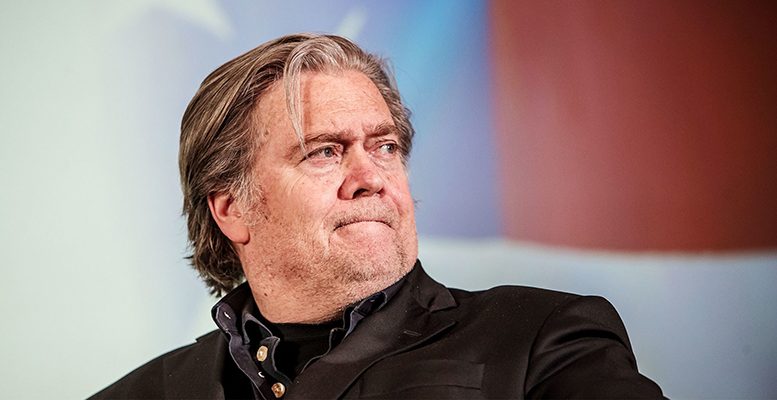 Peter Isackson via Fair Observer | Though Steve Bannon’s English hero, Boris Johnson, is (momentarily) in charge of the chaos in the UK, his Italian champion, Matteo Salvini, is out.

When Steve Bannon left the Trump administration in 2017 after having established the new dogma of “America First,” few assumed that his new vocation would be to convert Europe to his doctrine. No one expected an opportunist who had dallied with the movie industry and alt-right journalism at Breitbart to set up office in an abandoned monastery with the aim of launching a political and religious revolution based on the theology of intolerance. No one would ever confuse Bannon with a prophet or a messiah, but like so many successful Americans of the past, he understands that pseudo-religious fanaticism is the shortest path to celebrity, riches and possibly power.

Bannon has made headlines in recent months doing mildly important things on the European side of the Atlantic, such as advising British Prime Minister Boris Johnson (who denies any relationship with Bannon just as firmly as Donald Trump, Prince Andrew and Bill Clinton have denied their documented relationships with Jeffrey Epstein).

Less anecdotally, Bannon has committed himself to a project that he deems monumentally important: converting the “Judeo-Christian” world of his imagination (basically, white civilization) to the global cause of anti-Islamic populism as the anointed defender of the interests of ordinary, working-class people against a predatory elite. His plan began with the rental of an abandoned monastery in Trisulti, Italy where he intends to build an academy with the power to change the course of history. After all, Plato and Aristotle did it; why shouldn’t Steve Bannon?

The Dignitatis Humanae Institute (of human dignity) aims to train “budding young politicians to become staunch Catholics and right-wing populists” and to become — in the words of the institute’s fanatical director, Benjamin Harnwell — the “global headquarters of the fight to defend the Judeo-Christian basis of Western civilization.” Harnwell quotes his master: “Steve’s expression is that this is a gladiator school for culture warriors.”

Bannon takes credit for Donald Trump’s victory in 2016, which he interprets as a triumph of the average, working-class American over an international despotic elite. Who, after all, could possibly doubt the simple truth that a billionaire real estate hustler sums up the essence of the US working class? It’s true that Trump doesn’t live like the average Joe. He has a lot more money and wallows in ostentatious luxury. He has spent most of his life exercising the kind of manipulative power that wealth grants to those who know how to use it, which is rarely the case for an out-of-work welder or even one who still has a job.

For Bannon, though Trump may have a different style, The Donald shares the industrial working-class’s aspirations and approach to life. Go after what you want — whether it’s a tower in Las Vegas, the US presidency or Greenland — and affirm your will without ever apologizing.

In Bannon’s vision of history, Trump as president has effectively liberated the US working class from the clutches of a faceless financial and corporate elite who play with interest rates, send jobs abroad and frequent Davos in January. Trump is nothing less than a crusader in the name of working-class values. If he gave tax breaks to the rich, it was to help the working class. Trump’s base would never make the absurd mistake of confusing the rich (Trump’s friends) with the global elite (Trump’s and Bannon’s enemies). They couldn’t possibly be the same people. Isn’t that obvious?

After engineering the 2016 victory of a president who keeps America first by proudly and blithely adding to the already hyper-massive (and never properly audited) US military budget, Bannon has set out to conquer Europe. Having already trained one now successful gladiator in the UK (Boris Johnson), his monastery is preparing to train hundreds of others, all of whom will undoubtedly accept to sacrifice themselves in the arena of populist politics for the prosperity and enjoyment of the people… and certainly not the elite.

Unfortunately, things have recently taken a negative turn for Bannon, though it’s too soon to count him out. His attempt to mobilize a series of right-wing populists for the European elections in May achieved nowhere near its projected success. And now his champion gladiator in Italy, Matteo Salvini, has been successfully sidelined from his manipulative quest for supreme power thanks to an unforeseen alliance between the nebulous Five Star Movement and the center-left Democratic Party. At the same time, the revolt has been brewing locally in Trisulti against Bannon’s invasive school for modern fascists.

One of the ironies of Bannon’s attempt to revive and redefine the monastic vocation as gladiatorial studies in the name of “Judeo-Christian values” is his campaign to accuse Pope Francis of heresy. Francis appears to have taken too seriously one Judeo-Christian’s non-gladiatorial leader’s advice to “turn the other cheek” (Matthew 5:39) as well as his over-tolerant position on immigration: “Let the little children come to me, and do not hinder them, for the kingdom of heaven belongs to such as these.” (Matthew 19:14)

As one US commentator said: “Steve Bannon apparently doesn’t choose small targets and now he wants to undermine the leadership for Pope Francis.”

Bannon’s metaphor of training gladiators reveals his Hollywood-influenced misunderstanding of European history and global politics. Gladiators were not trained to conquer. They were entertainers, but first of all slaves. A Roman gladiator might conquer, not other people or armies, but — with a combination of skill and luck — his personal liberty as a reward for his exceptionally entertaining performance in the arena. The less exceptional gladiators had no such joy following a poor performance. As for the relationship with the Roman elite, historians understand that “gladiatorial spectacle was staged by the wealthy as a means of displaying their power and influence within the local community.”

The real background issue, however, is the term Judeo-Christian itself. Historian Mark Silk, in a recent articlepublished by the National Catholic Reporter, provided a potted history of the evolution in meaning of the term Judeo-Christian from the 19th to the 21st century. He identified Bannonism as the latest example of a term that has changed in meaning over time: “[T]his vision consists of economic nationalism joined to a simplified version of [Samuel] Huntington’s conception of the ‘clash of civilizations.’”

If Huntington was simplistically xenophobic, Bannon has upped the ante in what Silk calls “the underpinnings of populist economic nationalism — of neo-fascism in our time.” Bannon clearly indicates his drift toward Manicheanism (a historical heresy) when he affirms his goal: “I want the world to look back in 100 years and say, their mercantilist, Confucian system lost. The Judeo-Christian liberal West won.”

*This article was originally published at Fair Observer. Neither Fair Observer nor The Corner necessarily share his views.