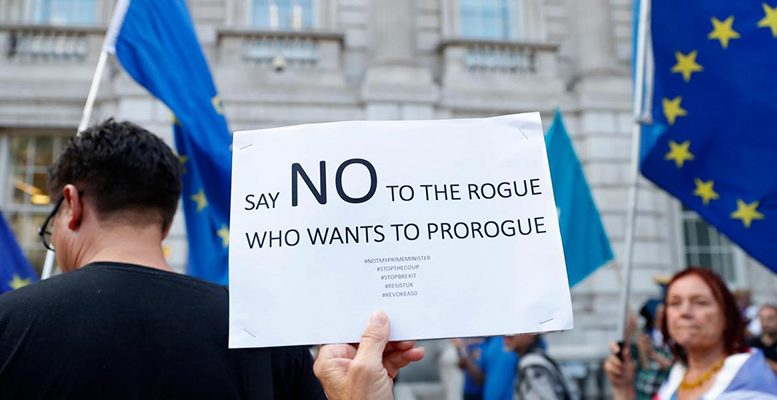 Chris Iggo (Axa IM) | Suddenly the Brexit stakes have been raised. Prime Minister Johnson has made a call that convincing the world that he is prepared to leave the EU without a deal and that he is prepared to take risks with democratic and parliamentary convention are worth it if it results in the UK and the EU reaching a compromise withdrawal agreement before October 31st. It is a gamble and the tactics are being challenged by both political and public responses. Yet an alternative course of action is hard to see given the lack of credible anti-no-deal strategies so far. If Johnson’s bet pays off, the UK leaves the EU with a deal, sterling rallies, and confidence to the economic outlook can return. If not, economic and political chaos will continue and probably worsen. I said I would adhere to “Sober September” – that might prove to be very challenging!

It’s all been a bad Brexit dream – In the three-and-a-bit years since the UK held the referendum on membership of the European Union it has been a consistent theme that the eventual outcome was very difficult to predict. Because Brexit has been and continues to be a very emotive political issue, trying to decipher important political developments from the noise has not been easy. What I think we have learnt has been the following.

First, a second referendum was always likely to be a very low probability event once Theresa May had said that “Brexit means Brexit”. While there was support for a second vote amongst those that voted to Remain in June 2016, there was never enough support within Parliament to deliver the necessary political capital needed. Quite simply because MPs did not want to be seen to be rejecting a democratic result and many did not want to turn their back on their constituencies where the Leave vote might have been the majority even if they themselves were Remainers; that is what is known as political suicide in a parliamentary democracy.

Secondly, there should never have been any hope attached to over-turning the result of the referendum based on allegations that the Leave campaign “told lies” or “misled voters” or engaged in social media related information manipulation.

Thirdly, despite some extreme views on the Leave side, there was never a majority in parliament or in the country for a “no-deal” exit which would have potentially negative economic and social implications.

So, the reality has always been that the only viable way forward was to reach an agreement with the European Union’s representatives on an orderly withdrawal of the UK. The problem all along has been a lack of political leadership and poor parliamentary behaviour that have, at times, led to the false expectation of some kind of unicorn outcome (clean-break, second referendum, revocation of Article 50). The lack of clarity has taken its toll on the pound ($1.22 today versus $1.45 before the referendum) and on investor, business, and consumer confidence. Not only that, the almost exclusive focus of politicians on Brexit for the last three years has had a significant opportunity cost in terms of lack of action on other pressing political and economic needs.

Big move – With all that in mind, in the wake of the decision earlier this week to suspend Parliament for a period of 4-5 weeks ahead of the government’s new policy agenda being presented in the Queen’s Speech on October 14th, where are we today? While the decision has been met with widespread opposition and criticised as an anti-democratic and potentially un-constitutional move, it pays to try to think about the outcome in a calmer way. Prime Minister Johnson has sort of called the bluff of the alliance of MPs that are opposed to no-deal Brexit, opposed to any kind of Brexit, or opposed to the government for whatever reason and hoping for its collapse, resulting in a new general election to be held. The lack of cohesion and leadership of this group has meant that, so far, they have not been able to offer a credible alternative to the end-game of “deal or no-deal”. Many voted against Mrs May’s Withdrawal Agreement. There is no convincing alternative to Boris Johnson as Prime Minister (installing Corbyn or some other temporary head of a government of national unity (sic) following a vote of no-confidence would be just as democratically questionable as the process that delivered Boris himself to Number 10). If there was enough parliamentary support for a second vote, a new election, or revocation of Article 50 it would have been evident long before now.

Tin hats on – It is going to be a difficult few weeks as there will be civil protests (Johnson has really only shortened the window for debate by around six days if we assume that parliament would have been suspended anyway for the party conference season as it normally is – but that won’t stop large anti-government demonstrations and accusations of a “coup”). There may well be a vote of no-confidence brought when parliament is sitting. But I have to ask what that would that achieve. Would another new government be able to go to the European Summit on October 17th and get a deal when it would have political chaos in London trailing in its wake? The Brexit Party under Nigel Farage are also not likely to keep quiet just because Westminster is empty as they will smell a rat. Markets could reflect the ratchetting up of political risks. Tin hat time I suspect.

Poker hand – But what is it that the Johnson government is really trying to do and is it worth being accused of “bringing an end to British democracy?”. My view is that they will try to get a deal on October 17th by renegotiating the withdrawal agreement based on a change to the Irish backstop. If the UK government continues to say it will leave on October 31st without a deal if necessary – and so far, it has done that with more conviction than Theresa May ever could – then the gamesmanship with Europe could result in compromises on both sides. After all, a hard-Brexit would be a huge shock to the Irish economy and would result in changes at the border that could possibly alter the terms of the Good Friday Agreement. Johnson probably wants that deal but is playing a better hand of poker than the UK has done so far.  EU Council President Tusk goaded the UK Prime Minister at the G7 last weekend saying that he should not want to be remembered as the “no-deal” prime minister. But that could be turned around quite quickly if the EU does not show any compromise to ensure a new, modified Withdrawal Agreement is reached. If Johnson is successful, and indulge me on this, he will then return to parliament and offer MPs the choice of his new deal or no-deal. If he gets his way, there will be some certainty in the outlook which could have positive implications for confidence. While parliament rejected Mrs May’s deal on three occasions, it likely will not reject the next one.

Buying sterling – This scenario would surely see sterling higher against the dollar and the euro. It might also boost mid-and small-cap equities and lead to some better forecasts for UK GDP. It might also reverse the recent decline in long-term UK gilt yields. It is interesting that sterling did not weaken on the news of parliament being suspended – everyone that wants to be short the pound already is. A hard Brexit has been increasingly priced in. If we get an orderly agreement that avoids the UK economy suffering the shock of moving to a new trading regime very quickly, then the pound could soon be back above $1.30 or even higher.

This thing just got real – Brexit has been about tactics – or lack of them – for a long time now. No-one knew what kind of Brexit was being proposed in June 2016, but the intervening period has allowed emotional populists to get hold of the debate. This in turn has divided parliament and public opinion. With weak political leadership and a steadfast EU, there has been no progress on carving a clear path. We might be close to that point now. However, this is Brexit we are talking about. I would not want to attach a huge amount of confidence to the scenario I describe because what Johnson has done is a mighty gamble. The next few weeks will be fascinating. By November 1st Brexit could have been realised with a deal that satisfies – with caveats – both Europeans and British. It could also be the case that Brexit happens with no-deal the result of which will be more political chaos. I wouldn’t put Boris Johnson’s chances of being Prime Minister for much longer very high under that outcome. Or it could be that Brexit does not happen and the ground-hog day of political and economic uncertainty will persist well into 2020. The second two scenarios are bad for the British economy and British financial assets. Only a deal would bring confidence. One would hope that the people that will be sitting down and talking to each other in the next six weeks or so recognise that this is the best outcome.