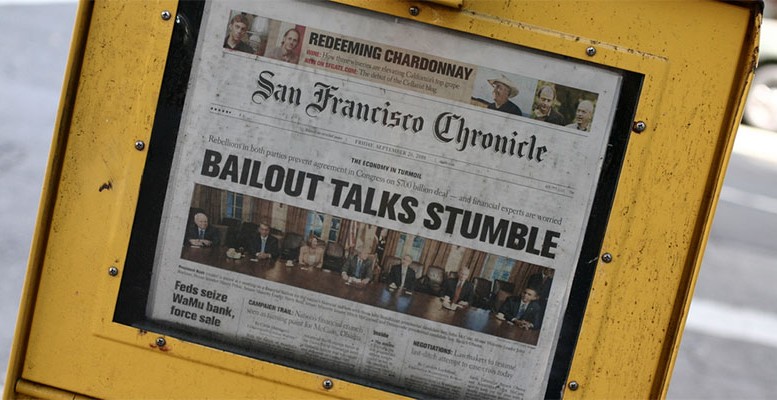 Benjamin Cole via Historinhas | Probably bank and other financial institution bailouts, within context, are positive for the economy. Indeed, aggressive robustly financed bailouts should be conventional policy, while other regulations eschewed, as long as shareholders and convertible bondholders take the first, big and hard hit of any major financial institution failure.

Forgotten in the demonization of Wall Street and banks of the past eight years is that when a loan is not repaid, it is not a loss to the economy. The borrower gains what the lender lost. For the macroeconomy, loan losses are neutral, though lenders lose.

The bad news for the banks has macroeconomic repercussions, however. The bank finds its capital shrinking, meaning it can extend fewer loans under regulatory edicts.  As banks are one transmission belt for new money into the economy, this is a serious drawback. Moreover, the banks cut lending just when borrowers are having trouble making loan payments, as in a recession. A soft economy encourages a bank retreat.

Add on the property angle: If banks pull in their horns, then property values can decline, as much of the value of a property depends on available financing. Dropping property values will reduce bank lending further. You get the picture.

The proposed solution to a fragile U.S. banking system hitherto has been Dodd-Frank, except no one seems to understand what Dodd-Frank does. The big banks have gotten bigger, say some. There are debates if bank capital has increased by much since Dodd-Frank. Are banks in derivatives or not? Yes, and no. Major financial institutions are told their “living wills” are inadequate.

Others say Dodd-Frank has encouraged the growth of unregulated nonbank banks, or shadow-banking.  This is supposed to be good, as taxpayers are not on the hook if the shadow-banking sector collapses.

But if shadow-banks pull in their horns, the macroeconomic effects will be the same as if commercial banks pulled in their horns (see 2008). A taxpayer bailout is the least of our concerns.

Now, no nation wants to say “sure, bail out banks” and encourage moral hazard. But if bank shareholders or convertible bondholders take the first hard hit in a bank failure, there is no moral hazard.

Perhaps only one law is needed: Lending institutions must have capital of X% (say, 40%), half equity and half convertible bonds. It will be up to the board of directors to represent shareholder interests and prevent “reckless” lending or dabbling in derivatives. The bondholders’ committee is the second line of defense, since they will own the bank if it burns through shareholder equity.

If a troubled bank burns through convertible bond money too, then have the U.S. Federal Reserve print money, recap the bank, and get it up-and-running and lending ASAP. Injecting new money into the economy during a time of bank failures and recession strikes as an excellent idea. No need for “taxpayer bailouts.”

Indeed, I suppose after a bank is recapped and operating again, it could be sold by the Fed, reaping a profit for taxpayers.

The amount of fulminating against the $700 billion of “bank bailouts” in the 2008 bust is curiously out of proportion to circumstances. In fact, most of the money was recouped for taxpayers anyway.

Bank regulations could be printed on a postcard and sent to all lenders: “You banks and other lenders shall have a healthy dollop of equity on the line, which is destroyed if your loans go sour. Then your convertible bond-owners will take over as new owners, and be thrown into the fire to sink or swim.”

If bondholders drown in the flames, the Fed will take control and bailout the zombie lenders quickly with lots of freshly printed money, and sell the rescued bank for taxpayer profit, and move on.

PS In years past, the argument against bailing out banks with hundreds of billions of fresh cash would have the potential for inflation (which is the stand-by argument against every action taken to avoid recessions or depressions). Given that developed nations have tried trillions of dollars worth of QE, and yet frequently slip below inflation targets, I assume this fear can be dismissed.

PPS: Yes I know I mixed metaphors, and that e-mails have replaced postcards. But I liked the idea that “regulations should fit on a postcard.”