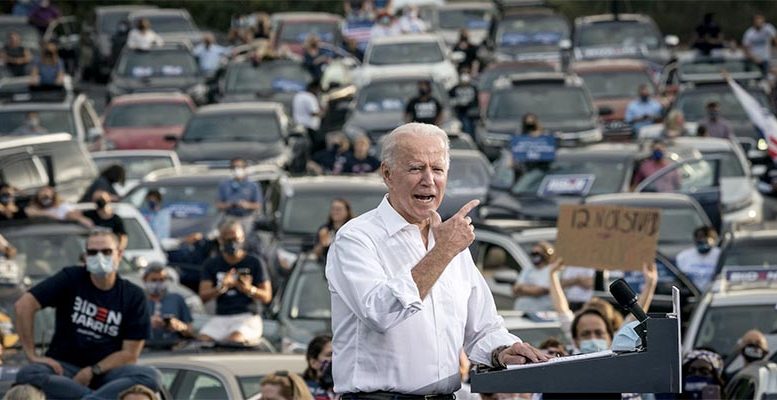 Stephanie Laiser via The Conversation | President Joe Biden just proposed a roughly US$2 trillion infrastructure plan, which he ambitiously compared to the interstate highway system and the space race. He aims to pay for it solely by taxing companies more, including the first increase in the corporate tax rate since the 1960s.

Biden said he wants to increase the rate from 21% to 28% – which would still be below the 35% level it was at before the 2017 tax cut – and strengthen the global minimum tax to discourage multinational corporations from using tax havens. Together, he estimates it would raise the necessary funds to finance his plan over 15 years.

“No one should be able to complain about” raising the rate to 28%, Biden said in a speech announcing the plan. “It’s still lower than what that rate was between World War II and 2017.”

As an expert on tax policy, I believe he’s got a point.

What’s more, I think the president’s plan appeals to the basic principle of tax fairness that the corporate income tax was founded on: The taxes a person or business pays should be commensurate with the benefits they receive from public spending. And companies receive quite a lot.

History of the corporate tax

Prior to the 20th century, the federal government funded itself primarily with tariffs and excise taxes on goods such as alcohol and tobacco.

The first corporate income tax was signed by President Abraham Lincoln in 1862 to help fund the Civil War and then phased out in the 1870s.

As the U.S. grew in the early 20th century, policymakers worried about the economic and trade risks of relying too heavily on high tariffs. So in 1909 they created the corporate income tax that we know today, almost as an afterthought, in a bill that was designed to reform tariffs.

Corporate taxes did not become a major part of the U.S. tax system until they were used to help finance World Wars I and II. Before 1916, the rate was just 1% but grew to 12% during WWI and ballooned to 40% during WWII. Congress also passed “excess profits” taxes of up to 95% to curb wartime profiteering in certain industries.

Corporate tax revenue as a share of total government revenue peaked during the war, in 1943, at just under 40%.

After the war, excess profits taxes were eliminated, but lawmakers kept the regular rate high and raised it to 52% in 1951 as the U.S. entered the Korean War.

The thinking on corporate taxes began to change in the 1960s. In his 1963 State of the Union address, President John F. Kennedy proposed corporate tax cuts, arguing that they would “encourage the initiative and risk-taking on which our free system depends – induce more investment, production, and capacity use – help provide the two million new jobs we need every year – and reinforce the American principle of additional reward for additional effort.”

Shortly after JFK’s assassination, Congress passed his Revenue Act of 1964, which lowered the corporate rate to 48%.

But the high costs of the Vietnam War led Lyndon B. Johnson to add a temporary surcharge in 1968, which raised the rate to a high of 52.8% before being lowered back to 48% by 1971.

After that, the corporate tax rate began its 50-year decline as successive administrations, especially Republican ones, gradually chipped away at it. As a result, by 2020, corporations were covering just 7% of government revenue – compared with the 33% borne by individuals and families – even as they rake in record profits.

This same trend has been seen around the world as globalization prompted many countries such as China, Japan and European Union member states to lower business taxes in a global “race to the bottom.” In 2016, corporate tax rates made up just 9% of total government revenue on average in countries in the Organization for Economic Cooperation and Development.

[Get the best of The Conversation, every weekend. Sign up for our weekly newsletter.]

It seems that after 50 years of falling corporate tax rates, this trend may finally be coming to end – at least in the U.S.

Although Republicans in Congress remain firmly opposed to any increase in taxes to pay for infrastructure spending, the public seems to be on Biden’s side. A 2019 Gallup poll found that more than two-thirds of Americans believe that corporations pay less than their fair share in taxes. More recently, 47% of those polled on early reports on Biden’s infrastructure plan said they’d be “more likely” to support it if it was paid for with corporate tax increases, while 31% said it would have no impact on their views. Only 21% said it would make them less likely to support it.

I believe the popular appeal of Biden’s plan is that it reflects the benefits principle, which states that a tax bill should be based on the value of the benefits a person or company receives from the government.

And that’s basically the reasoning behind the corporate tax created in 1909.

A 1911 Supreme Court decision that upheld the constitutionality of the corporate income tax explicitly invoked the benefits principle, arguing that with incorporation owners of a business enjoy “distinctive privilege[s]” — such as protection from individual liability and the ability to sell stock — “which do not exist when the same business is conducted by private individuals or partnerships.

“It is this distinctive privilege which is the subject of taxation.”

Decades of research show that businesses benefit tremendously from being located in countries with political stability and inclusive institutions that promote the rule of law, protection of property, due process and democratic participation. Companies based in the U.S., perhaps more than anywhere else, enjoy all these privileges.

And that’s before we even get to what government directly spends money on. Companies have benefited enormously from investments in mass transportation, local development, free public education, the internet and many other types of infrastructure.

peaking of infrastructure, and Biden’s plan, companies arguably benefit more than anyone from repaired bridges, upgraded electrical grids, increased broadband access, and research and development. According to a review of the research by the Congressional Research Service, public investment in core infrastructure, especially during a recession, can spur faster productivity growth and reduce long-term unemployment.

One objection to the benefits principle logic – as economists are fond of reminding us – is that businesses cannot actually pay taxes. Only people can. When a business is taxed, that tax is passed on in some combination of higher consumer prices, lower wages and lower returns to capital. Economists call this concept tax incidence and often argue that a misunderstanding of tax incidence is what leads many people to support higher taxes on business.

But economists may be missing the point. The benefits principle justification for taxing corporations relies on the logic of procedural justice – an emphasis on the fairness of the process rather than the outcome. If corporate balance sheets benefit from public investment, procedural justice dictates that their taxes should reflect that benefit, even if those costs and benefits are ultimately passed on to individuals.

The price you pay

And so it makes a lot of sense for companies that will benefit so much from these investments to pick up the tab. Investment that boosts productivity will mean big gains for corporate America.

As the recent experience with COVID-19 vaccine development has shown – in which the U.S. has invested billions of dollars to get a vaccine in record time – businesses also benefit from investment in basic science research. The sooner everyone is vaccinated, the sooner the economy and business can get back to normal.

Put simply, a reasonable level of taxation can be thought of as the price corporations pay for all the benefits of American taxpayers have given them.