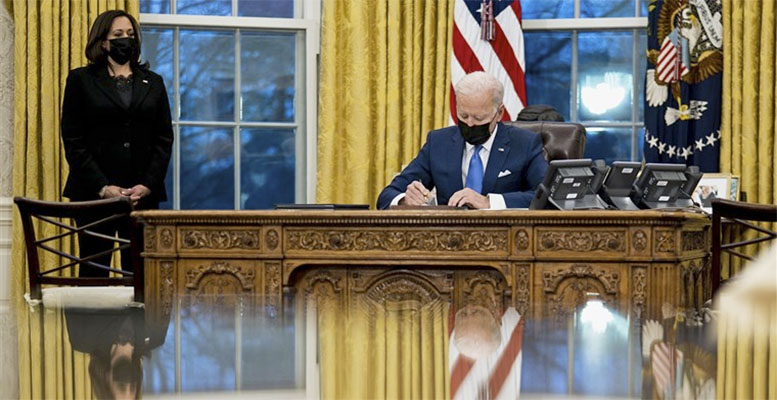 Olivia Álvarez (Monex Europe) | Joe Biden’s proposed $1,9 trillion stimulus bill will run its race in Senate next week, as House Democrats passed the legislation on Friday. The package includes $1400 direct payments to most Americans, a $400 weekly jobless benefit and an extension of unemployment insurance programs to a larger share of eligible candidates. The bill also includes $20bn for Covid-19 vaccinations, $50bn for testing and $350bn into state and local aids. The plan also aims to hike the federal minimum wage to $15/hour by 2025, although this particular amendment hangs on a thin balance. Republicans continue to raise questions about the need for nearly $2 trillion in additional spending, as a successful mass vaccination should help reopen the economy earlier this year. However, the Republican’s vote in this piece of legislation is set to be redundant as Democrats undertake the path of budget reconciliation. Through this mechanism, the bill only requires a simple majority approval in the Senate, as opposed to the 2/3 share typically required. With the Senate divided 50-50 by party, the tiebreaking vote of Vice-president Kamala Harris means the Democrats are set to claim victory over the proposal.

Democrats have pinned the final approval of the bill by March 14th, which is the deadline for expiry of current unemployment benefits passed in December. Estimates from the Century Foundation predicted that 11 out of the 18 million people receiving unemployment benefits would be left unprotected if the bill isn’t approved on time: 4 million people in Mid-March and another 7.3 million in the following weeks. This puts immense pressure on the Senate to get the legislation moving according to the schedule. Based on statements from Democratic officials, the bill will be debated, and possibly amended, in the Senate between March 2nd and 5th. A final round in the House is pinned for the week of March 8th-12th if senators make any legislative change.

Yet, some key hurdles stand in the way, potentially setting back the March 14th timeline. On Friday, Senate parliamentarian ruled that the Congress can’t pass a minimum wage increase under the budget reconciliation process, challenging the whole stimulus bill agenda. Without a substantial and direct impact on federal spending, debt and revenues over ten years, the provision isn’t allowed under this mechanism. There is a number of avenues on which the Democrats could fight back this decision, including a call to overrule or even sack the parliamentarian. Themost likely alternative, however, consists of a backdoor minimum wage hike that does comply with the reconciliation requirements, penalising big companies that underpay their employees and offering incentives to small businesses to meet the $15/h minimum wage. Such an amendment would be apt for the reconciliation rulebook, as it has direct impact on the budget accounts. To prevent the unemployment benefits missing the critical deadline, Democrats might undertake the minimum wage discussion on a separate piece of legislation. These developments should come quick and fast over the course of next week.

The approval of the stimulus package is set to add fuel to the hectic price action in bond markets of late. Estimates by Pimco highlight that the US economy could grow by 7.5% this year as a result of Biden´s stimulus package, a rate not seen since the 1950’s. Even as the investment giant predicts that inflation dynamics are unlikely to spiral up because of firm´s stronger power on wage negotiations, this rapid growth could push up inflation to above 2% over the “next several years”. Boosted reflation expectations have been the major theme in financial markets recently, as the country also speeds up its vaccination campaign and props up reopening plans. More than 44 million people have now received one dose, and nearly 20 million have had two.

Optimism over vaccines and stimulus has led to expectations of a rapid recovery in the US economy and inflation, even as the Fed reinforces the long road to full employment and persistently high and stable price growth. Regardless, upcoming events should continue to boost the rising yields narrative supporting the relative strength in the USD. Other bond markets in advance economies are quickly catching up with the Treasury selloff, inflicting notorious volatility in FX markets. With central banks increasingly showing discomfort about rising yields, any tones of additional support to the economic recovery might just add more volatility into financial markets. On a similar note, markets will be frantically searching for clues on the actual evolution of the economy, as they look for a reality check of their hawkish expectations. In this context, markets will soon turn to a heavy data-dependent mode, in which key data releases like the change in Non-Farm Payrolls will garner more attention than ever before.