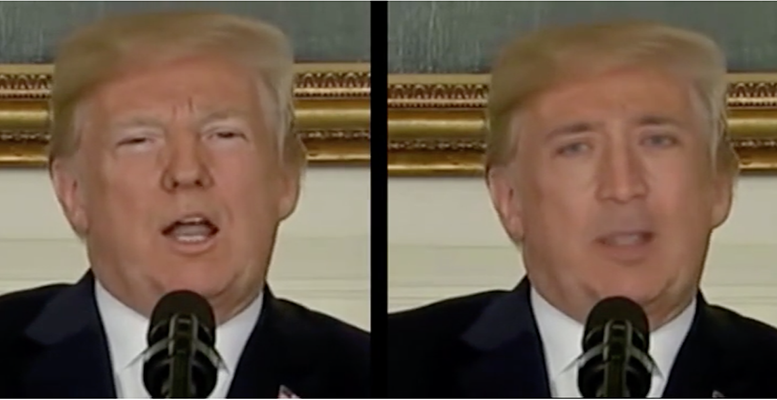 A deepfake of actor Nicolas Cage put onto US president Donald Trump.

Peter Isackson (Fair Observer) | We may soon be obliged to call our beloved fake news “shallowfake news” now that deepfake technology threatens to disrupt our perception of the truth.

In early 2019, Foreign Affairs took a detailed look at the social and potentially political implication of the emergence of a phenomenon called “Deepfakes,” the result of recent advances in digital technology. The article describes the kind of manipulation of images and sound that now make it possible, starting with disparate components of reality, to fabricate convincingly realistic documents that appear to be totally natural. The perfect device for creating and maintaining an increasingly hyperreal world.

The article provides readers with the basic scientific principles concerning the technology used. It combines artificial intelligence, big data and digital manipulation of image and sound. The authors present deepfake’s practically limitless power of hyperrealistic simulation. Its emergence and future exploitation may require changing the traditional proverb to: “Fool me once, shame on you. Fool me twice…” and we both can be sure it’s deepfake technology that has pulled off the trick.

The article explores in considerable depth the potential for distortion and manipulation. It goes on to speculate at length about the measures that may eventually serve to combat its effects or neutralize its insidious power. The authors reach a largely pessimistic conclusion: There is no easily implementable defense.

Deepfake means that what everyone now recognizes as the contamination of our media — and particularly our social media — by “fake news” has taken one enormous and worrying step further. Unlike fake news, deepfake doesn’t just appear in the form of narrated information, which usually boils down to the biased interpretation of reported facts. Instead, it imposes itself as a substitute reality in the form of a far more convincing presentation of “alternative facts” than US President Donald Trump’s and other politicians’ brazen lies. It’s more than words. It resembles concrete reality but may be entirely imaginary.

The authors of the article, Robert Chesney and Danielle Citron, worry about its use in politics, a domain in which truth already has some difficulty in making itself known: “Deepfakes have the potential to be especially destructive because they are arriving at a time when it already is becoming harder to separate fact from fiction.”