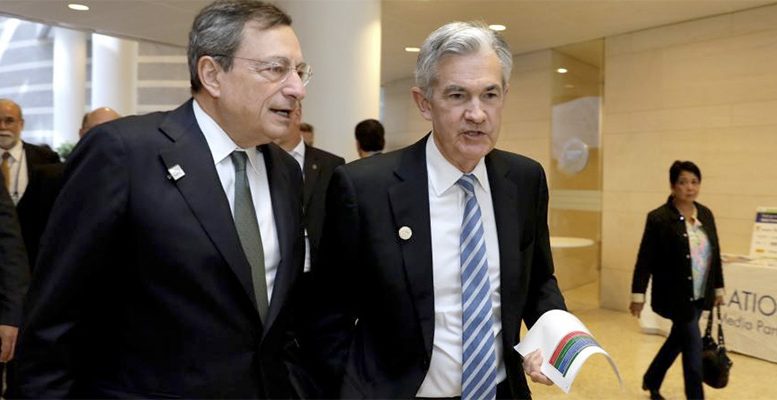 Jerome Powell and Mario Draghi during the IMF spring meeting

When it comes to sending messages to the market, Jerome Powell is proving less conventional and more straightforward than Mario Draghi. Last week, the Fed undertook a much-discounted rate hike, in an attempt to counter the inflationary pressures coming from higher energy prices, as well as the robust performance of the economy propelled by the Trump administration’s tax cuts. In a scenario forcing the Fed to further tightening, Chairman Powell added fuel to the fire by delivering a forthright appraisal of the strength of US growth.

Meanwhile, Mario Draghi announced the ECB would scrap the QE scheme by the end of the year: a sharp and unexpected change in his policy line. Yet, he coupled this tough announcement with an unusual pledge to keep interest rates as they stand till mid-2019. In this way he watered-down the heralded drive towards normalisation. No wonder the greenback rose against the Euro, while investors pushed up Stocks in the Old Continent. The markets reacted in Europe contrary to what one might expect when monetary policy tightens.

Jerome Powell is much to blame for this. His crude message will inevitably lead to higher than warranted expectations for skyrocketing rates, depriving him of the necessary margin for manoeuvre in resisting mounting pressures. Observers have noticed the hike has failed to materialise in an even way. The rate for bank deposits, acting as the ceiling for money price, was increased by only 0.20%, a move that undoubtedly reflects the Fed’s annoyance at the way short-term interest is performing. Rather than evolving well inside the rate targets, it shows a marked bias to keep close to the upper limit. If he wants to retain full control over monetary policy, Mr Powell would be well advised to refrain from using too upbeat language the next time he addresses a press conference.