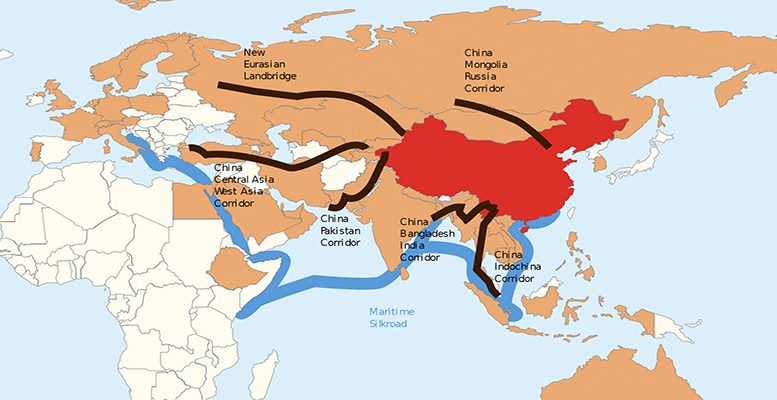 Though it might change shape, the Belt and Road Initiative is certainly not going away

China’s Belt and Road Initiative (BRI) marked its fifth birthday in September 2018, though there was probably less to celebrate than the Chinese authorities might have wished. Five years after President Xi presented the initiative to the world in a speech in Kazakhstan, the BRI is facing pressures on three fronts. A progress report by Citi details which ones are these three sources of tensions.

The first is what might be called a ‘dollar constraint’. Since the renminbi is not a fully functioning global currency, the BRI largely requires dollar -denominated financial resources to fulfill its objectives: it is significant that the major financing announcements made to kick-start the BRI in 2014 — recapitalizations of the China Development Bank, China Export -Import Bank, as well as new capital for Silk Road Fund, the AIIB, and the New Development Bank — were all made in dollars. And since China lacks an infinite supply of dollars, it therefore lacks an infinite capacity to meet its goals.

The second is the increasingly loud accusation from recipient countries that the initiative is too little ‘win -win’ and too much ‘China -win’. This summer the Malaysian prime minister Mahathir Mohamad described a “new colonialism” — a phrase that captures the idea that the BRI has led to the accumulation of liabilities on receiving countries’ balance sheets to pay for projects of uncertain value, built mostly by Chinese contractors on opaque terms, allowing China’s regional influence to grow in ways that are out of proportion to the benefits that countries can expect to enjoy. This kind of concern led to Malaysia’s suspension last month of the $20 billion East Coast Rail Link, one of the biggest -ticket projects in the entire BRI. Even Pakistan, whose people and governments routinely express the world’s most amiable view of China, recently cut down the scale and cost of the Karachi -Peshawar railroad project. The IMF’s Managing Director has called for ‘absolute transparency’ in the nature of the liabilities the BRI is creating.

A third source of unease now facing the BRI is the explicit opposition of the United States, made clear in recent speeches by the U.S. Vice President, who has warned recipient countries against what he described as a ‘constricting belt’ and a ‘one -way road’. What started off as an unwelcoming but tolerant U.S. response to the BRI five years ago has now turned into outright hostility. The BRI should be understood as in the context of a shift in Chinese foreign policy that has become evident in the past few years. The Deng -era concept of tao guang yang hui — ‘hide your light and make the most of your obscurity’ — was replaced in late 2013, shortly after Xi’s Kazakhstan speech, with a more assertive principle: fen fa you wei, or ‘exert yourself and get things done’. The BRI can be seen as an extension of this principle into the economic sphere. As with any new forei gn policy strategy, a period of reassessment will follow the initial implementation. In broad terms, Chinese scholars are already debating whether China has been guilty of ‘strategic overstretch’ in recent years. Given some of the constraints that the BRI has faced since its launch, the question can similarly be posed about the initiative itself.

Perhaps what will emerge from this debate is a ‘kinder, gentler’ BRI, one that is more sensitive to the international criticisms described above, and one that mor e obviously meets China’s objective of becoming a ‘many -to -many’ platform for international cooperation that links countries through the development of infrastructure, trade agreements, a simplification of customs procedures, and cultural exchange. One indication that this might be the case lies in China’s growing interest in co – financing BRI projects with multilateral developments banks. Since these banks require open tendering and adherence to strict governance standards, their involvement could create a more multilateral -looking BRI.

Though it might change shape, the BRI is certainly not going away.