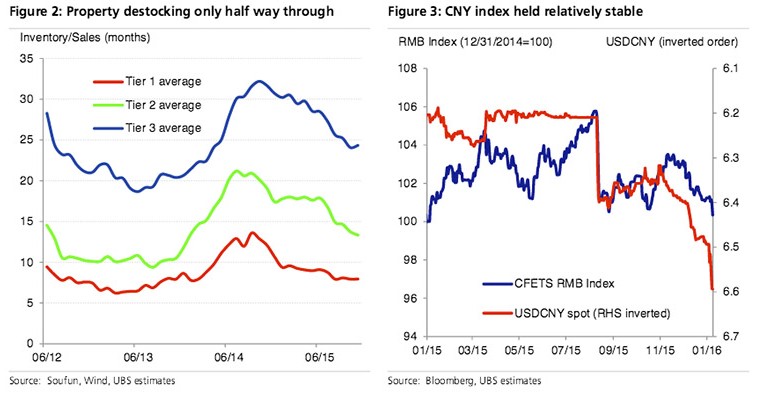 UBS | 2015 saw China’s growth slowing further but the government’s intensified policy support helped to prevent a hard landing. The equity market was very volatile and the world was surprised by China’s modest but perhaps ill – timed currency move. For 2016, we expect growth to grind lower with further policy easing, corporate restructuring to accelerate, and RMB to depreciate by another 5%. However, there could be some big surprises too on property destocking, SOE reform, RMB exchange rate and financial markets.

Real GDP growth to grind lower to 6.2% in 2016. The continued property construction slowdown and excess capacity overhang in the industrial and mining sectors will likely lead to further weakening of industrial demand and fixed investment. We expect the government to increase its fiscal support/deficit and infrastructure investment, alongside more property policy easing, but all this will unlikely fully offset all downward economic pressures. With stabilizing oil and commodity prices, we see CPI inflation staying at 1.5% and producer prices declining by less in 2016. Nominal GDP will likely grow just 5%.

China’s government has emphasized the need to push ahead supply – side structural reforms, and said that key tasks in 2016 include destocking, retiring excess capacity and lowering of leverage. We think increasin g difficulties at the corporate level and the steady formation of a feasible bankruptcy framework will lead to more “zombie company” closures and bad debt write – offs. Lower input and energy costs, reduced financing costs, and additional tax relief should a lso help limit further corporate margin deterioration.

Against a backdrop of US rate hikes and strengthening USD, we see more PBC attempts to decouple the CNY from USD, allowing for a moderate (5%) depreciation with increased two – way volatility. However, the PBC will need to tighten management of capital flows to prevent strong depreciation expectations from driving the CNY much weaker, or FX reserves from running down too quickly. We fore cast USDCNY trading at 6.8 at end – 2016.

Sliding demand and producer prices, a heavy debt burden and still high interest rates will mean corporate cash flow issues, undermine their debt servicing ability and worsen banks’ underlying asset quality. Despite this and the ongoing bond market boom we do not foresee a major credit event or systematic financial distress. We think the government and banks will provide continued support to prevent NPLs from rising too rapidly, and the PBC will prevent any credit event from spreading to the system by ensuring sufficient liquidity.