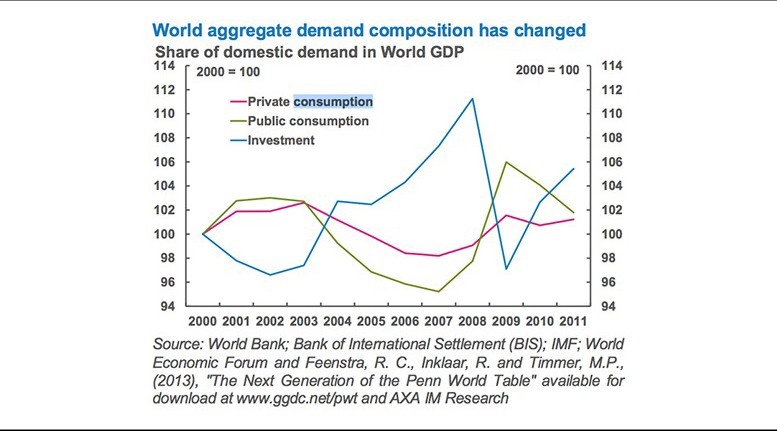 Recent research by the International Monetary Fund (IMF) argues that the slowdown in international trade growth is mostly attributed to structural factors and is therefore here to stay. According to the IMF, the slowing pace of international vertical specialisation is the culprit rather than increasing trade protection or changing composition of trade and aggregate demand.

This lower trade elasticity, capturing the sensitivity of trade to changes in income, was most pronounced in Emerging Asia and Europe. This structural change in emerging markets’ trade elasticity is due to the aggregate demand composition which has changed towards less import- intensive components like public consumption. The share of investment in the world aggregate demand dropped significantly immediately after the GFC. Investment recovered somewhat subsequently, but not to its pre-GFC level. The share of private consumption was roughly stable. Importantly, the share of the least import- intensive aggregate demand component, public consumption, increased significantly and it exceeds that of private consumption in the post-GFC period. Hence, the change in the aggregate demand decomposition towards less import-intensive components partially explains the fall in trade, as investment recovered somewhat post-GFC.

The aggregate demand composition changed for EMs, too. The GDP share of investment increased across EMs, but in CEE it remained unchanged—partially justifying why CEE’s trade elasticity fell over time. Asia experienced the smallest increase in the investment share of GDP contribution.

Another explanation proposed for the slowdown in EM trade elasticity relates to the change in the trade structure. For example, a high share of services implies a lower trade international trade volume as services need less imported inputs to be produced relative to manufactured goods which have a larger imported component. Also, a change in the trade structure would have changed the relative importance of the trade elasticity of each component in the overall trade structure. The share of services in imports remained nearly unchanged across time and EM regions, except in MENA where it declined.

Impact of exports on GDP

It is important to stress that few EMs have done their homework to reform, differentiate their product offering and support international competitiveness during the most recent expansionary phase of their business cycle. Commodity exporters are the laggards in that regard, contrary to their EM manufacturer peers. In order to generate 1% real GDP growth, EMs now have to invest more than they did in the past. Although the EM response to the OECD’s proposed reforms improved in 2014 relative to 2012, the measures introduced are still at the halfway stage.