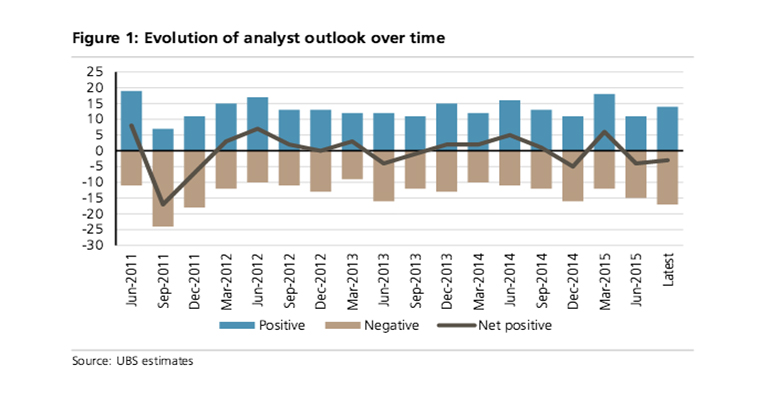 Based on our latest in-house banking survey, sentiment towards the banking sector has deteriorated further over the past quarter. The decline in expectations on the banking outlook reflected rising global growth concerns, uncertainty over Fed funds rates, as well as volatility in commodity prices and currencies.

The most notable change in sentiment was towards China, where we have be come more cautious and now have a slightly cautious view, driven by concerns over economic growth. Elsewhere, we are very cautious on Colombia, Greece, Singapore and Thailand (although our country analyst thinks Thai banks are now more fairly valued, and slightly cautious on Georgia, Hong Kong, Malaysia, the Philippines, Poland, Taiwan and Turkey. We are slightly bullish on the United Arab Emirates, the Czech Republic, Hungary, Indonesia, Mexico, Peru and Russia.

In contrast, sentiment in developed markets has improved and is now somewhat positive. Against a backdrop of further global growth concerns, prospects of higher US Fed funds rates, and volatility in commodity prices and currencies, bank fundamentals have weakened further: our bottom – up 2015 EPS estimates for global banks have been revised down by 3.4% over the past year, with earnings risk seen largely to the downside.

By country, we are cautious on Australia, Austria, Spain, Switzerland and the United States (regionals). We are slightly bullish on Benelux, Ireland, Israel, Italy and Nordic banks, and very bullish on the UK and the US (brokers and universal banks).

We reiterate our overweight stance on US banks, given the generally constructive GDP outlook that should further underpin the recovery in credit demand for consumer loans, as indicated by recent Fed surveys. The start of a new tightening cycle also bodes well for the outlook for NIM (although recently the timing of rate hikes has become less certain), while banks are likely to remain focused on efficiency improvements and credit trends are likely to remain strong.

We also see positive signs on the regulatory and capital front, as US banks continue to increase capital returns, and we have seen less rhetoric around ratcheting up the regulatory pressure. Additionally, both Congress and regulators appear willing to consider a pro posal that would ease the burden for smaller banks.

Reflecting our positive stance on US banks, we include in our global banks preferred list Morgan Stanley (better – than – expected results driven by the wealth management (WM) business and the emerging asset sensitivity story), Bank of America (a self – help story with a free option on higher rates), Citizens Financial (an earnings recovery story that can grow earnings with or without higher rates), and Fifth Third (efficiency upside, capital distribution and attractive valuations).

Neutral on Canada, Europe and Japan

Valuations for Canadian banks have come in to reflect some a nxiety over credit costs; they are now trading on 10.4x P/E, 2.0x P/TBV with a 19.7% ROTE, on our 2016 estimates. Canada’s oil – exporting economy has been vulnerable to the sharp fall in oil prices, prompting the central bank to announce a surprise 25bp rate cut in January 2015 and a further 25bp rate cut to 0.5% in July 2015. Since January, inflation has remained low (seasonally adjusted CPI was 1.20% in August), but we believe a weaker Canadian dollar should boost exports.

Our economics team believes the Bank of Canada will not immediately follow the Fed into a rate hike, and forecasts the overnight to remain at 0.5% during 2015 and to rise to just 1.0% by year – end 2016. Fundamentally, the sector looks reasonably healthy, with good funding and capital posit ions, but while asset quality has not deteriorated, we are cautious about what the drop in oil prices could mean for credit costs. Our top pick is TD Bank (strategically well positioned and diversified, with a growing US footprint).

We retain our neutral stance, as we think the sector in Europe is at fair value while fundamentals are stable. Our economics team expects a recovery to be underpinned by the ECB’s accommodative policy and the soft euro, despite rising external risks, and forecasts GDP gr owth of 1.4% in 2015 (versus 0.9% in 2014) and 1.9% in 2016. Given heightened external risks, the ECB has turned move dovish recently, arguing that it stands ready to “do more” if needed, although our economics team views the hurdle to “QE – 2” as still high, and sees an extension to the current QE programme that ends in September 2016 as more likely ( see report ).

However, lower yields from QE have resulted in margin pressure for eurozone banks, which has contributed to the 12.3% downgrade to our 2015 EPS estimates since the start of the year. In our global banks preferred list, we include two banks from Europe: ING , where we expect business restructuring to drive higher returns over time, and HSBC, which we recently upgraded to a Buy rating.

While we acknowledge that HSBC has emerging markets exposure, we also believe it has considerable restructuring potential that could boost the grou p’s returns and capital levels, as illustrated by the recent sale of its Brazilian business.

We also maintain our neutral stance on the Japanese banking sector. Macro growth has deteriorated, with recent GDP data disappointing. Reflecting this, Ja panese banks are struggling to generate top – line growth, given shrinking margins, even though equity – related gains and credit allowance reversals have contributed to better net profits. We are aware that the major Japanese banks are now facing market press ure, supported by the Tokyo Stock Exchange’s (TSE) Corporate Governance Code and regulators’ concern about banks’ equity – holdings risk, to realise unrealised gains on their strategic shareholdings (so – called “cross – shareholdings”). We think the banks will make progress in unwinding cross – shareholdings, but not enough to improve their valuation significantly in the short term. Our top pick is SMFG , given what we see as its relatively attractive valuation and financial position, enabling it to follow MUFG’s s hareholder return policy – i.e. in starting share buybacks.