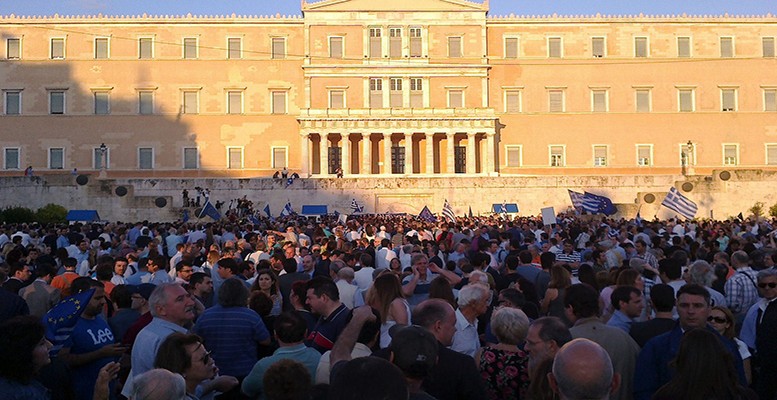 Jens Bastian via Macropolis | When the Eurogroup of finance ministers met in Brussels last week, a major reform roadmap was agreed with the Greek representative, Euclid Tsakalotos. The 49 prior and pending actions that have to be adopted by the Greek government by mid-October in order for urgently needed financial assistance to be released are a work in progress taking place under severe time constraints.

The mid-October “milestones”, as they are officially called, represent a prime example of how the micro-management of the Greek political economy remains the focus of international creditors. Greece has to, among other things, comply with reform requirements that stretch from finalising a comprehensive strategy for the financial sector, presenting a plan to complete the clearance of arrears, establishing three mobile enforcement teams on anti-smuggling, begin the implementation of the gas market reform, etc.

What is immediately apparent from these randomly highlighted examples are the issues of time, which is in desperately short supply, and of domestic ownership of the process, which proves rather challenging to identify. The implementation capacity of the Greek public administration will be stretched to its limits in the coming weeks. The civil service is tasked, with no time to lose, with the execution of controversial political decisions.

Staff in line ministries and regulatory agencies are expected to undertake this responsibility against the background of an administration that lacks human resources in key departments and has been subject to painful wage cuts over the past six years. Put otherwise, the adoption of this package of milestones risks meeting resistance at various levels of the public administration. Equally, the prior actions have to confront manifest technical deficits in the implementation of such complex and time-consuming compliance requirements.

Given the rather mixed track record of implementing the first and second memorandums of understanding in Greece, the execution of such an ambitious reform agenda as included in the third programme requires an effective monitoring mechanism. The required policy interventions required for the 49 milestones remain politically charged for different government ministers. Moreover, the necessary interaction between ministries mandated to adopt secondary legislation and executing agencies at different levels of the public administration responsible for the timely implementation of these regulations cannot be guaranteed. Recent examples of government – administration interaction since the first memorandum in 2010 suggest one should not expect major success stories in the near future.

In view of these deficits, the third macro-economic adjustment programme incorporates an unprecedented level of technical assistance provisions for the Greek authorities. This commitment includes the necessary cooperation with and demand for technical assistance from international organisations such as the Organisation for Economic Cooperation and Development, World Bank, International Labour Organisation, European Bank for Reconstruction and Development, individual EU member states and, most importantly, European Commission.

Since July 2015 the Structural Reform Support Service for Greece (SRSS) has replaced the former Task Force for Greece of the European Commission. The new service is not exclusive to Greece. It also operates in Cyprus and a small team is active in Portugal. What the Commission in Brussels has demonstrated with the establishment of the SRSS is twofold. For one, a commitment to support the complex and controversial implementation of a multi-year reform agenda in cooperation with local authorities and domestic technical experts.

Secondly, the offer of EU support, necessary as it is, needs political acceptance on the ground. It requires stakeholders inside and outside the Greek government and parliament who are prepared to invest political capital and mobilise the administrative capacity to engage in the delivery of such an extensive structural reform agenda.

It goes with saying that the execution of the country-specific reform list for Greece will be a major challenge for the mandate of the Brussels-based SRSS. Public revenue management and the facilitation of exports, developing efficient public procurement practices, as well as providing assistance on social inclusion schemes, underline the magnitude of the task and the need for productive engagement between political authorities in Athens, public administration institutions and the SRSS.

The new service will also offer recommendations and expertise to its counterparts in the Greek public administration on how to recharge the utilisation of available EU structural funds effectively. Up to the end of 2014 Greece had made significant and impressive progress in the absorption of these ESPA funds (to use the Greek acronym), reaching a record level of almost 88 percent.

This singular success story quickly lost administrative momentum and political impetus after the change of government in late January. Absorption levels declined during the first six months of 2015 because available funds remained unused. These lacunae were most glaringly apparent in the financial mismanagement of EU resources earmarked for the refugee crisis during the summer months.

Hence, the SRSS has its work cut out. So do the different Greek counterparties. Establishing a working relationship after first building trust from scratch will be key, but time is a luxury. The second SYRIZA-led government will have to engage in repair work on its cooperation with EU institutions and SRSS representatives after the damage that was done to it from January to August 2015.

This effort by the new administration in front-loading trust and reliability has the potential to pay dividends quickly. A return to the high levels of ESPA fund absorption, as achieved in 2014, cannot be expected overnight. But EU structural funds are still the cheapest form of financial assistance available to Greece, coming at a zero percent interest rate and continuously declining levels of co-financing requirements for past, current and future funding programmes.

There is no easy way to implement the extensive list of prior actions and milestones. It will be a bumpy ride along the implementation highway. There will be delays and unintended side effects. Such pendular experiences should be recognised by all sides concerned. But what the Greek authorities literally cannot afford to do in the coming weeks and months is to mismanage the levels of cooperation that are required with the numerous technical expert teams.