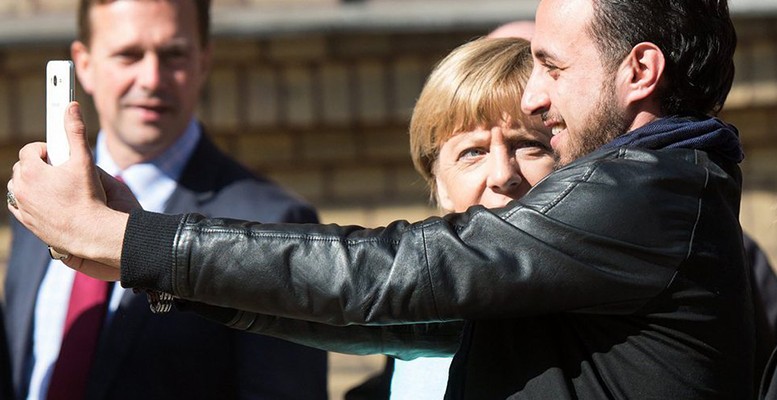 Chancellor Angela Merkel’s ‘open door’ refugee policy could cost her her job as well as cause an unwanted shift to the right in Germany.

At the end of this year there will be one and a half million refugees in Germany, according to the tabloid Bild. The serious press calculates over a million. “We can,” said Chancellor Angela Merkel in early September when she decided to open the doors wide to asylum seekers. Between that statement and today’s reality – an unlimited flow of refugees – there is an abyss that could cost her her job as chancellor and Germany its social consensus. Merkel’s quote will be put to the test. The question is whether Germany can do it all. It has become one of the most favourite emigration destinations in the world. Germany is a paradise for millions of people across many countries.

But in this paradise only one tenth of the refugees recognised by the German asylum law are working. Those who are not recognised as such (because they come from countries considered as safe) are expelled.

But that cannot be an argument against emigration.

“We accommodate them for humanitarian reasons, not economic ones,” concludes the head of the Center for Economic Research in Mannheim.

But the chancellor’s courage with her refugee policy could cause an unwanted shift to the right in Germany.

The Germans are not all rich, but there is a strong boom in their purchasing power. The reasons are low inflation, wage increases and the implementation of the minimum wage. Most live well and there is a perception about general welfare, which is one of the pillars of social peace. Hence the enthusiastic welcome for thousands of refugees at Munich station in September. The generosity with which more than 12,000 asylum seekers were welcomed during the first weekend in September surprised the world. They were welcomed with applause, food and toys. The response of foreigners: “Germany, Germany, Germany.” “A great gesture of humanity,” praised the organization Pro Asyl.

The Foreign Minister, Social Democrat Frank-Walter Steinmeier, already warned then that “without the support of the European partners we will not be able to surmount this historic challenge.” Firstly, Merkel authorized the entry of thousands of refugees because of their extremely precarious situation in Hungary. “A mistake,” was what the Bavarian Christian Social party with which she governs called the move at the time.

A month later: “We cannot take more, we have reached the limit,” says Social Democrat Axel Schäfer, head of his parliamentary group. “The external borders of the EU must be controlled.”

For Schäfer, the uncontrolled access cannot be overcome either by the population or by the administration, and not even by the migrants. With each day that passes, it is becoming clear that Germany needs a plan. And this plan should not only consist of money, but also provide the answer to the question of whether Germany should limit the number of refugees and how. The arguments about the solidarity of the German state of law and the need for labour of its economy are not enough to justify Germany’s gesture in recent weeks. It can’t do it all by itself. And neither will the instruments that Merkel is betting on provide quick results: namely hot spots or registration and accommodation centers in Greece and Italy, as well as the commitment from Turkey, where the majority of refugees travel through, to control migration flows

More and more voices from her Democratic Party CDU are demanding limits to the flow of refugees. “We must close the borders for six months and declare the closure for admission of asylum applications,” says the deputy Klaus-Peter Willsch. But the chancellor has opted to personally accept full responsibility for the refugee policy. The Interior Minister, Thomas de Maizière (CDU), who is in charge of the administrative part -management of asylum applications, border control and expulsion of non-recognised applicants- has admitted that the German asylum system is not ready to manage these mass flows. Nor is the economy. In August, Germany said it is expecting up to 800,000 refugees in 2015.

Now in October, one and a half million is the number reported. And not only by the tabloid Bild. And “the well-trained doctor from Syria is not common,” says Social Democratic Labour Minister Andrea Nahles. Although most of them are under 30 years of age, 80% of refugees have little or no training, according to the Federal Employment Agency. And companies are looking for specialists. Only 10% of the 230,000 new jobs which will be generated in Bavaria until 2020 may be covered by unqualified personnel. The director of the Institute for Study of Labour (IZA), Klaus Zimmermann, estimated that half of the 800,000 refugees (officially predicted) will live off benefits for a couple of years. The government has seven million people who will receive aid to survive in 2019.

While the newcomers will not compete with the Germans in the labour market – there may be a competition amongst all foreign residents for jobs requiring less qualifications – they will compete for the social resources to which the most disadvantaged segments of the population have access. In addition, there is the scepticism raised by the austerity debate in Europe. This transmits the image of Germany as a country obsessed by spending less in order to reduce debts, when what Berlin wants is for the indebted countries to manage their spending well in order to avoid more debt.

“Germany has created a more humane model of capitalism, the social market economy, a system threatened by global competition but one which is still alive. It allows for a consensual society where different interest groups such as employers and employees bet on dialogue and agreement, rather than ineffective struggles. This Germany distrusts power – in reaction to its Nazi past – and distributes it among several actors.” According to Stefan Ulrich, political commentator of Süddeutsche Zeitung, Germany is, in this sense, a paradise. But an imperfect paradise, of course, because it does not provide for all.

However, Germany cannot lose control of the refugees’ issue. There are fears about Germany’s stability and security. There is also concern about the multiplier effect: the refugee recognised in Germany as such will be able to bring his family later.

Angela Merkel has once again repeated that Germany will overcome this challenge. Many questions arise. The town council of Eschbach, in Baden-Württemberg, has rescinded the contract with a tenant of a house owned by the council to accommodate migrants. The Hamburg Senate has approved an initiative to force the owners of empty commercial houses to rent them to refugees. The reality of hundreds of thousands of refugees is prompting decisions to be taken before winter comes.

Germany feels alone in Europe and Angela Merkel also feels alone within her party. Two Christian Democratic politicians on her side are Bundestag President Norbert Lammert, and the Minister of Finance Wolfgang Schäuble. For now, Merkel has chosen to reiterate that Germany will not impose a limit on the number of asylum seekers who can be accommodated. But it will accelerate the expulsion of purely economic refugees,while trying to reduce the flow of refugees who want to reach this country. To achieve this, she is betting on negotiations with Turkey, the country that can block their entry into the European Union.

At the beginning of November, a law to accelerate the process of recognition of asylum rights for refugees will come into force. Countries like Albania, Kosovo and Montenegro are safe countries, so they will be expelled quickly and they will not be able to work in Germany.  In addition, they will receive vouchers and social services instead of money – 143 euros per month. The aim will be for the refugees to stay in the first shelter throughout all the stages of the process. This will save costs and facilitate the expulsion of those who will not be recognised with the right of asylum. The rejected applicants will no longer receive any social benefits and they will only have board and lodging until they leave. In the first half of 2015, 8,178 people were sent back to their countries of origin. In return, those who are recognised will be given many opportunities to learn a profession and a language. The great risk would be if they do not do just that. Without training, there is no work. More than half of the refugees arriving in recent years neither study nor work.

Political commentator Nico Fried from Süddeutsche Zeitung believes that there is a broad consensus on the need to limit the emigration flow, but this option will not be free, neither from a moral or financial point of view. “It has a price. That’s why Merkel acts with so much caution, because she knows it. Securing the external borders of the EU will cause new problems, tragic destinies, dramatic images.”

The refugee crisis could become a great story for the xenophobic right. According to the expert Hajo Funke, “support for the chancellor from the population and the political-economic elite could change if the policy fails to competently and quickly manage the migratory challenge.” For Funke, who has been investigating the evolution of extreme populism for 25 years: “Germany runs the risk of turning to the right.” The aggressive radical right party Alternative für Deutschland is already demanding that the borders are closed.