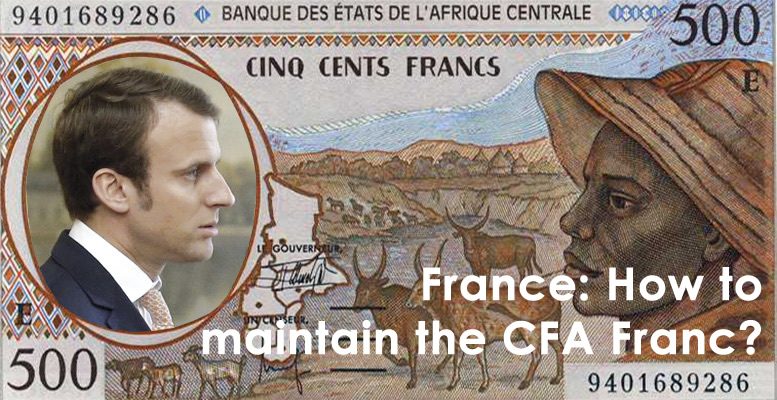 Since its creation in 1945, the CFA Franc is considered as “France’s shame in Africa” and “an insult to the sovereignity of the African countries”, according to numerous experts. A perception which was converted into an obvious reality, increasing the intensity of the criticisms, after the massive 50% devaluation carried out by France in 1994. In a report entitled “Africa’s monetary servitude”, Le Monde Diplomatique flagged that “10 out of the 14 countries in the FCFA zone come under the category of the least developed countries (PMA) and nearly 90% of their population lives on less than two dollars per day. That said, on 11 January 1994, they were given the promise that their situation would improve with the devaluation of the FCFA. What in fact happened was that their purchasing power was sharply reduced as a result of the devaluation, as well as the measures taken by international financial institutions which accompanied this.”

The result that economies which were already fragile went bankrupt, which many analysts link to the massive emigration of Africans towards developed countries, a phenomenon which has accelerated since then. The environment was favourable: Europe’s economic expansion and the consolidation of the welfare state required foreign workers.

But now the offensive against the FCFA has resurfaced as a result of the revelation last November in a German economic newspaper of a well-kept secret, but one which in fact was generally suspected: France receives 440 billion euros for supporting this currency and guaranteeing that it can be converted into euros without any price fluctuation, according to Deutsche Wirstschafts Nachrichten. A scandal which neither the African leaders nor the European Union can ignore.

The attempts to abolish this “colonial pact” have lost the African leaders their jobs; the last one, Mamadou Tandja, was ousted in 2010 for his attempt to liberalise the market for the only raw material in his desert country, although it’s not the exclusive opinion of “radicals”. Former conservative French President Jacques Chirac made this very clear in an interview with Michaël Gosselin on 1o May 2008, one year after he left the Elysee Palace: “We often forget that the money we have in our wallets comes precisely from centuries-long exploitation of Africa…So we would need some common sense, some justice, to give back to the Africans what we have snatched from them.” The messages from Hillary Clinton, ex-US Secretary of State, confirm the rumours about the real motives for the overthrowing of Muamar Gadafi in 2011, at France’s request: the Libyan leader was reaching a consenus across Africa for the creation of a continental currency guaranteed by the gold standard.

The current increasing wave of criticism against the FCFA started during a difficult time for France, worried about the Islamic terrorist attacks and on the eve of the last presidential elections considered as crucial. Then from there that the leading French politicians felt themselves obliged to comment on an issue which has been irrelevant in previous electoral processes since the IV Republic.

François Hollande, after renouncing his candidacy in May, assured in Bamako that his country “is still open to all proposals from the member states of the zone about the future of the FCFA; the ball is now in the court of the leaders of those countries which share this currency inherited from the colonial days.” His predecessor, Nicolas Sarkozy  said: “France cannot allow its former colonies to create its own currency and have full control of its central bank. If this happens, it will be a catastrophe for the Treasury, and could drag France down to 20th place in the ranking of global economic powers. Marine Le Pen aligned herself with the criticisms: “I condemn the Francafrique policy practised by my political opponents and I will break with it…”

Interviewed by the weekly magazine Jeune Afrique, ahead of the first round of the French elections, Macron was elusive, or cautious, about the matter: “exiting the FCFA zone is a choice which should first be made by the Africans themselves. “Those who don’t feel comfortable in the zone can leave and create their own currency.” With similar forcefulness, he opposed a “Marshall Plan” for Africa, proposed during the G-20 Summit in Hamburg.

The advantages of being tied to the euro

If Le Pen had won the elections and left the Eurozone, could the Bank of France guarantee the FCFA?

Many local African currencies are under a lot of pressure due to the instability of oil and other raw material prices. Edward George, head of Ecobank’s research group – a pan-African institution founded in 1985 which groups together 36 States – announced last March that between 2012 and 2016, the decline in raw material prices caused Nigeria, Angola, the Democratic Republic of the Congo, Ecuatorial Guinea and Zambia to lose some 130 billion dollars in export revenues. Such a severe drop in revenues sparks a liquidity crisis which affects those countries’ currencies. Hence those in favour of maintaining the FCFA highlight its advantages: “The parity with the euro has been very positive for the FCFA in the last 10 years; we have had very low inflation, a very low interest rate and financing capacity,” argues Lionel Zinsou, an economist and banker from Benin City. While acknowledging there are certain disadvantages which curb development – “we are the only countries in the world which are still paying a tax to another nation in the XXI century” – this former prime minister is in favour of keeping the FCFA, “a stability factor”: “the link to the euro and the backing from the French Treasury have allowed our economies to avoid the volatility observed in markets like Nigeria.