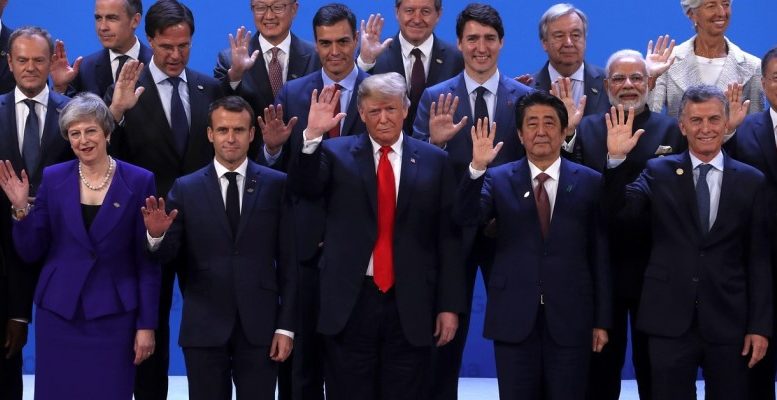 Photo family at G20, which was held in Buenos Aires last week

In times when any pretext serves to tout the historical nature of any electoral victory or parliamentary vote, it is surprising that there were no headlines for the G-20 in Buenos Aries so that history could record something other than it had just taken place. In fact, only the diligence of Argentine diplomacy, supported by the Europeans, secured something as routine as a joint declaration. Thus we find, clause 27, a vapid agreement over the “margin of improvement” which the multinational trade system needs and support for “necessary reform of the WTO”. The remaining clauses are even vaguer and just to reflect general concerns about the climate it was necessary for to dedicate a separate clause in which everyone recorded that the US has withdrawn from the Club of Paris.

The immediate interest of this meeting lay in the dinner celebrated between a group of impassive orientals and another of bad-tempered westerners, which served to establish a truce in the increase of tariffs between the US and China. There was no joint declaration after the dinner: each side made its own. Combing various sources of information, it appears that the President of China committed himself to renewed efforts to reduce the trade deficit with the US and to discuss serious problems intellectual property and other issues raised by the US. After three months we suppose that President Trump will let us know if he is satisfied, in which case the tariffs on some Chinese imports will be frozen at the current 10%, rather than being increased to 25%.

It is probable that Trump will just wait until 1 March to review the progress from his conversation with the President of China. But in this volatile world, which the White House has taken on itself to agitate even more, there are other events which have provoked his fury and reaction. For example, GM’s decision to close factories, “which is caused by the massive import of German cars” (presidential commentary), could break the Trump-Juncker truce and reopen the tariff file with the EU. Or some Democrat reticence, prematurely anticipated by Pelosi, to approve the finally revised agreement with Canada and Mexico, now known as USMCA. Many things can happen in three months. If they deserve it, this journal will take them into account.