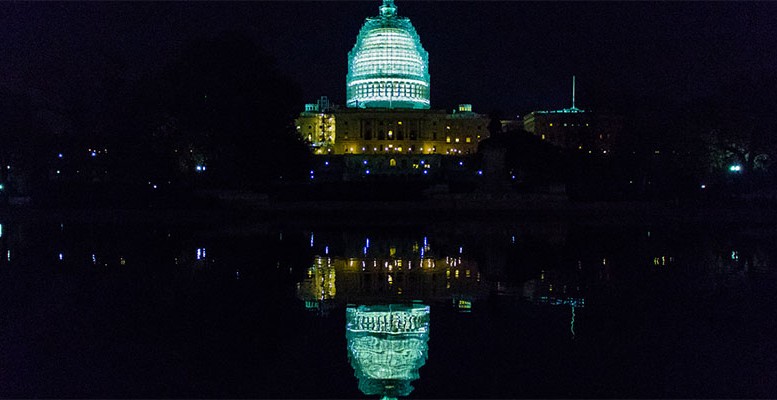 Capitol Building, US House of Representatives

Andrew Tanabe | With the blustering presidential nomination process in full swing, ideological polarization among partisans often feels like a swelling tide in today’s America, adding a chaotic undercurrent of lurching impulses and public vitriol. There are also signs that partisanship among the electorate has increased recently and could be the root of governmental partisanship.

Continued intransigence by congressional Republicans, including the refusal to consider an appointment to the US Supreme Court by President Barack Obama following the death of Justice Antonin Scalia, suggests the final year of this presidency will not end on a high note.

In the Democratic race, Hillary Clinton has failed to convincingly consolidate a strong position as the frontrunner, with a strong anti-establishment candidacy run by Senator Bernie Sanders of Vermont who emphasizes class struggle and leftist politics.

Divided parties and a partisan public

In October 2013, the US federal government shutdown following a partisan standoff over the use of federal money for Affordable Care Act funding. The situation was only resolved after the country came dangerously close to defaulting on its public debt by waiting until hours before a deadline to raise the federal debt ceiling limit.

The high stakes brinkmanship was widely panned by the public. Widespread disapproval captures a key element of today’s ideological polarization in the United States. While elected politicians and partisans on both sides seem to become more entrenched in their sides, there is evidence that the majority of Americans are not any more divided than in the past.

Partisan divide is clearly visible at the federal level. Following the commanding reelection of Obama in 2012, the US electorate voted to bolster Republican control of the House of Representatives in the 2014 midterm elections. The enlarged GOP majority was more conservative than the previous Congress, and control of the Senate flipped from Democratic to Republican—guaranteeing the continuation of the bitter and implacable divide between the federal legislature and the president.

At the regional and local levels, many other signs of ideological polarization can be identified. Increased outrage over police killings and brutality toward young black men and women across the country has bubbled to the surface in organized protest. At times, the outrage has spilled into public unrest, as happened following the death of Freddie Gray in police custody in Baltimore, Maryland.

An important aspect of the current polarization is also the continuing erosion of income equality and the widening gap between the wealthy and poor. While the US economy has made steady gains in the years since the 2009 recession, steady job gains have brought down the unemployment rate but have failed to increase wages as millions remain out of the job market. The growth that has occurred has largely benefited the already wealthy, and there is ample evidence that much of the benefits have also fallen on racial lines, further exacerbating a tense debate over the status of racial equality in the US.

Moreover, a report by the Pew Research Center helps to establish that the population seems to be increasingly polarized as well. Along with people on both sides of the political spectrum becoming more likely to hold consistently partisan beliefs, they are also increasingly likely to view the policies of the other side as “threats” to the nation.

Political scientist Yphtach Lelkes offers a more nuanced understanding of the polarization issue. He emphasizes that polarization is a loosely defined phenomenon in the media. In order to understand polarization properly, we must not only look at how extreme the partisans are, but also at how much of the population is actually grouped in partisan camps.

Lelkes finds that while polarization in the US has increased among partisans, the general public is not considerably more partisan than in the past. He suggests that if politicians perceive deeper partisanship among their own supporters, political brinksmanship, deadlock and lack of compromise become appealing to prove partisan credentials. The lack of overall partisanship in the general population would explain the high percentage of the public that disapproved of the government shutdown in 2013.

Solutions to break the deadlock: change people or institutions

If a myriad of political, economic and social issues are manifesting as ideological polarization in the US today, it is likely that a vicious cycle of partisan theatrics and reflexive deadlock will be the result. But are there any clear solutions available to repair bitter divides?

The latest United States report of the Bertelsmann Stiftung’s Sustainable Governance Indicators (SGI) offers some options for America: Either change the people in charge or change the institutions. On the one hand, the population could simply elect more moderates and centrists to public office, while on the other, structural changes could be made to institutions to make them more effective at ruling with ideologically polarized officials.

The first could be achieved through non-partisan redistricting, mandatory voting or nonpartisan nomination processes. However, the SGI report also notes that reformed redistricting for House seats is unlikely to succeed as the Senate remains polarized despite state-wide electorates. Mandatory voting and nonpartisan nomination processes, while existent in other democracies such as Australia or subnational areas like California, Nebraska or Louisiana, are unlikely to gain enough political support to be passed at the federal level any time soon.

Alternatively, a number of institutional reforms could allow for more functional partisanship. The banning of filibusters against Supreme Court nominations, straight party voting systems in state ballots, or constitutional amendments to the functioning of the federal government could all increase the power of the majority party to reduce deadlock. However, each of these face political opposition not least by constitutional purists and proponents of states’ rights.

President Obama has taken steps to expand presidential power, such as executive orders on immigration and climate change policy, which have also increased the functioning of the government despite deadlock in Congress.

Options for future presidents include unilaterally raising the debt limit, or expansively interpreting regulatory authority to act could provide a potent counterweight to congressional intransigence. As we have seen with Obama’s moves in this arena, though, they can engender poor rapport with voters of both parties and result in threats to congressional funding for executive activities.