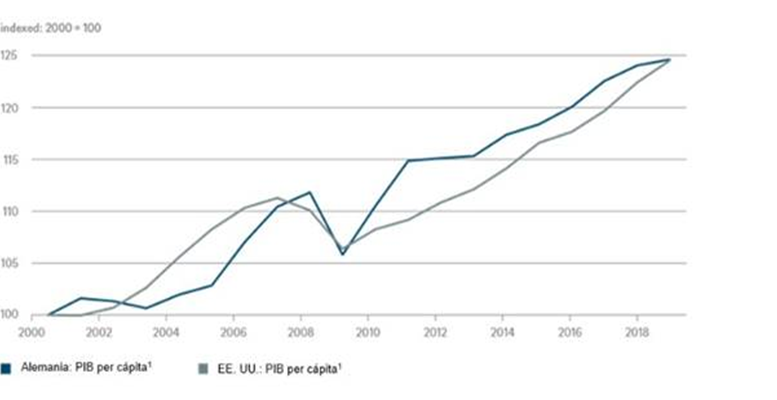 DWS | After experiencing a slight fall during the second quarter, German gross domestic product (GDP) grew at a slightly positive rate in the third quarter of the year. This means that Germany has been spared, by the hair, of falling into a technical recession. However, it is likely that the most recent data fail to reassure skeptics.

Many seem to think that regulation and bureaucracy are excessive, that social protection systems are very expensive, that fiscal policies are too austere, that there is not enough competitiveness, that too much emphasis is placed on environmental protection, and so on. The list of arguments seems endless. We continue to hear that Europe will never be able to keep up with the most dynamic economies such as the US. In Germany, older people will remember that such comments are nothing new: since the 1980s, both the German press and television have gone through regular periods of pessimism.

However, the growth data of the International Monetary Fund (IMF) reveal a different situation. If you look at the overall growth rates of GDP, USA. Clearly lead the race. However, if we adjust the data by population growth, that is, if we measure economic growth per capita, USA. and Germany have registered exactly the same economic growth since the beginning of this century. And, in fact, this is because Germany is experiencing a phase of economic weakness that is probably more related to protectionist measures from Washington than to the political decisions of Berlin. In the long term, we believe that pessimism is not justified.