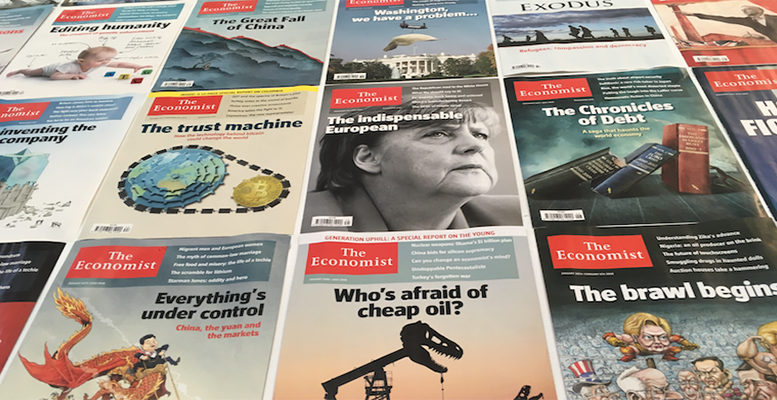 Peter Isackson (Fair Observer) | Accepted for well over a century as a voice of authority and economic if not political sanity, The Economist’s history reveals the secrets of a still dominant ideology called liberalism.

In an important article published by The New Yorker on one of the most confusing labels used to describe today’s civilization, Indian writer Pankaj Mishra deconstructs and disambiguates the range of meanings associated with the word “liberalism” by delving into the history and cultural impact of The Economist, founded in 1843.

The Economist has had a disproportionate role in shaping and spreading a particular web of ideas and — more often than many want to recognize — feelings that have influenced or even guided politicians and business leaders for nearly two centuries. The magazine has inculcated and sometimes imposed intellectual values that not infrequently strayed wildly from the ethical and communal foundations philosophers attribute to moral values and anthropologists to cultural values. In a very real sense, The Economist has been more than instrumental in creating the modern world, its successes and its failures.

In an article entitled, “Liberalism According to The Economist,” Mishra breaks down the elements of what many perceive as ideas in the form of a doctrine, elaborated and disseminated by the British magazine.

A word that has a positive ring in a society that values freedom, but which designates a range of contradictory concepts that make it possible for proponents to defend practices ideally designed to widen the scope of some people’s action while incidentally (if not deliberately) denying or destroying other people’s freedom

According to Nathan W. Schlueter, a professor of conservative philosophy, “The West is facing its most profound identity crisis since World War II.” The crisis he fears concerns the stability of a belief system constructed around the idea of “liberalism.” Many, like Schlueter, take it to be the equivalent of a philosophy of life. He identifies a schism between two different types of liberalism: “classical liberalism” (which he calls “Natural Law Liberalism”) and “modern liberalism” or “progressivism.”

What could be more confusing for an American than to hear the same word used to describe Reagan and Obama? Though their policies and their style of government were very similar in many ways, Americans have been taught to think of their society as divided into binary and incompatible opposites: Democrat vs Republican (voting preference) and liberal vs conservative (ideology or life philosophy).

Although writing for The New Yorker, Mishra develops his analysis from a point of view clearly within the European frame of reference. He describes the liberalism at the core of The Economist’s culture as something similar to Milton Friedman’s “technocratic neoliberalism—tax cuts, privatization, financial deregulation, antilabor legislation, cuts in Social Security—which have shaped policy in Europe and America since the eighties.” That liberalism in the US would correspond to voting Republican and American conservatism.

So, why all the fuss about a word? Mishra deals with how the ideas The Economist has consistently promoted — ideas that started in England and ended up in the form of neoliberalism in the US — came to define the globalized economic and political culture under whose shadow everyone now lives.

If Democrats are comfortable at home with the label “liberal,” which reminds them of the Roman virtue of generosity managed in favor of the “res publica” (the shared good, literally “the public thing”), Republicans now adhere to an idea of neoliberalism that signifies a maximum degree of individual choice and freedom from constraints. Since the main agent of constraint can only be the government, its role should focus exclusively on protecting the rewards of individual effort. This means reducing its activity to investing in collective defense (building an imposing military) and respecting the sanctity of private property (law and order).

Mishra describes the magazine’s history and even its current agenda as something akin to the work of missionaries in the colonies of the conquering British Empire: “The Economist proudly enlists itself in this combative Anglo-American tradition, having vigorously claimed to be advancing the liberal cause since its founding.”

In 2019, for the first time since the beginning of the Industrial Revolution, not only the role of the super-rich spawned by the “liberal” capitalist system but the very existence of billionaires is being called into question. Until now, the point of capitalism has been to allow people to accumulate as much wealth as possible, as anyone who has played Monopoly would have realized.

Things have begun to change. Even in the US — a nation that long deemed the word “socialist” to be synonymous with “un-American” and “traitor” — some politicians (old and young) have begun debating the perspective of socialist policies as a possible solution to the contradictions that have provoked the crisis Schlueter and other conservatives worry about. Despite that historical reality, The Economist continues to defend liberalism with a tone that James Fallows, cited by Mishra, described as “cocksure of its rightness and superiority.”

For the moment, The Economist can count on the establishment media to follow its ideological guidance and ratify its image as a voice of sanity and “rightness.” By focusing on the electoral horse race rather than the issues that imply paradigm change, the popular media on both sides of the Atlantic have avoided the inevitable debate provoked by the crisis of ideology.

In 2018, The Economist’s current editor, Zanny Minton Beddoes, organized a public debate in the US, not with Bernie Sanders, who calls himself a democratic socialist, but with Steve Bannon, who promotes an alternative ideology that remains faithful to the principles of capitalism: “economic nationalism.”

In that debate, Bannon claimed that economic nationalism “doesn’t care about your race … ethnicity … religion … gender … sexual preference” but about American citizens, who needed to defend themselves against the Davos culture of global capitalism. At the same time, in Europe, Bannon — who is a citizen of no European nation — was organizing the defense of Judeo-Christian civilization, which he deems to be threatened by people of other races and religions. That may be a case of having his cake and eating it: being against the rich locally and against the poor globally.

Most people who reacted to the debate felt Bannon was the clear winner. The Economist’s classical liberalism suddenly appeared outclassed by what is fundamentally a form of populist anarchism tending — through the logic of historical processes — toward fascism. For the first time in over 150 years, The Economist is finding itself on the wrong side of history, or at least of the ideology of history it created and sold to the rest of the developed world. With socialists on the left and nationalists on the right, liberalism is indeed in crisis.

Mishra does the service of reminding us of the real history of the liberalism that has produced a material prosperity that makes Panglossian optimists like Steven Pinker so proud but also has its darker side. Believers in liberalism have a talent for inventing wonderful forms of persuasive reasoning.

The views of The Economist’s founder, James Wilson, still resonate among American legislators who have made support of boycotting Israel a crime: “He opposed a ban on trading with slaveholding countries on the ground that it would punish slaves as well as British consumers.” Just as the working class today depends on the investments of billionaires for jobs, the slaves’ livelihood depended on their masters’ continued prosperity.

The liberal ideology of The Economist permits the kind of technocratic reasoning that the magazine’s founder infallibly deployed during the terrifying Irish potato famines in the 19th century. Mishra writes: “In the eighteen-forties, when Ireland was struck with famine, which was largely caused by free trade—the British insisted on exporting Irish food, despite catastrophic crop failure—Wilson called for a homeopathic remedy: more free trade.” When you believe in the “logic” of something like liberalism, you tend to be like the man with a hammer for whom everything begins to look like a nail. This reasoning finds its echo in today’s gun control debate in the US when those who “liberally” interpret the Constitution’s Second Amendment claim that if there’s a problem with guns, the solution is more guns.

Mishra reminds us of what has always been behind The Economist’s theoretical model of a successful economy. Citing historian Alexander Zevin’s book, “Liberalism at Large,” he agrees that “the liberal idea of individual freedom and international harmony” was transmuted, according to theologian Reinhold Niebuhr, “into the sorry realities of an international capitalism which recognized neither moral scruples nor political restraints in expanding its power over the world.”

The politicians of the world are still guided by the notions of expansion, growth and power that The Economist has been so instrumental in spreading to build a shared global political and economic culture.