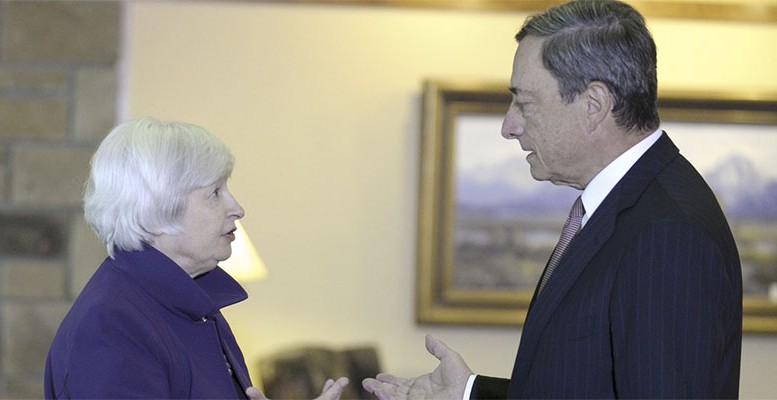 In the second half of this week, central bankers will make their annual pilgrimage to Jackson Hole, Wyoming, to attend an economic conference entitled “Fostering a dynamic global economy”.

Held every year since 1978 by the Kansas City Federal Reserve Bank, the event is a get-together of central bankers, academics and other policy experts, who discuss future trends in economics and central banking.

US Fed chair Janet Yellen and ECB President Mario Draghi, both of whom will be speaking at Jackson Hole, will be under close scrutiny from investors for any clues on future monetary policy decisions.

The event has generated many big headlines in the past and so “should not be taken lightly,” according to Intermoney. But it flags the fact that the ECB has already said Draghi will focus on the conference theme “and avoid dealing with sensitive monetary policy matters.”

“So we would expect issues like productivity, investment and improvements in education to dominate the Italian banker’s speech.”

“Given the proximity of the ECB’s next meeting on September 7, it’s very likely that Draghi will keep a low profile in terms of what he says…although you never know.”

Meanwhile, Janet Yellen is due to speak about financial stability on Friday, so there could be some margin for her to provide a fresh indication about the timing of the normalisation of the Fed’s balance sheet.

Some analysts believe the minutes of the US central bank’s late July meeting reflected a degree of discrepancy amongst FOMC members, rekindling the debate on when the start of the Fed’s balance sheet reduction will happen.

Deutsche Bank Markets Research team agrees the Fed “should matter more than the ECB at Jackson Hole,” highlighting the fact it is “in the driving seat” in terms of further interest rate moves.

“The ECB remains on a narrow path towards a gradual exit. Macro conditions and future PSPP reinvestments support a reduction of the pace of QE…But the euro strength prevents it from signalling a more aggressive tightening.”

“Following Draghi’s Sintra speech, we argued that the US will have to lead any further move in rates. Ahead of Jackson Hole, this assessment remains valid.”

Deutsche Bank adds that the Fed has already prepared the way for announcing “a reinvestment taper in September without hiking. However, the weaker than expected inflation has frayed the support for a December rate hike.”

“With fed funds currently at 1.15%, there is scope for one to two more hikes without monetary policy becoming restrictive,” Deutsche Bank notes.