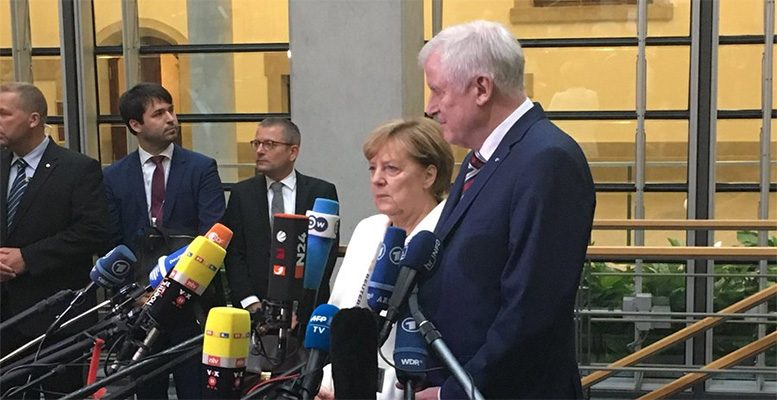 By Guntram Wolff | Jamaica has failed: the negotiations to form a new government in Germany by the so-called “Jamaica” partners, named after the colors of the parties that are the colors of the Jamaican flag – black, yellow and green, were ended by one of the small partners, the liberals. The breakdown came as a surprise to many and was certainly a shock to the Berlin political establishment. It is quite unusual for Germany to take such a long time to negotiate the formation of a new government.

But commentary that Germany has entered a “crisis” is wrong and exaggerated. For starters, the political negotiations for a different majority have already started. As this column is written, it is possible that the same partners of Angela Merkel’s previous government will come together again. This would bring a continuation of the current approach, an overall centrist government. The government will certainly be pro-European.

Yet, a coalition between the two largest parties is also going to be bad for the political discourse as Germany’s right wing party will become the largest opposition party. This is one of the reasons why many in the Social Democratic Party still strictly reject the option. So indeed, it cannot be taken for granted that a new government will be formed without a new election.

However, the talk of crisis misses the extraordinarily benign situation of Germany, which also allows for easier political compromises. The budget situation is certainly strong. Germany runs a fiscal surplus of around 30 billion euros ($35.3 billion), which is almost 1% of GDP. The rules governing Germany’s fiscal policies do not require more than a balanced budget. So there clearly is room for tax cuts or new spending that will make new political agreements possible.

More important than the government sector is the improving situation in Germany’s labor market. Unemployment rates have been falling substantially over the last decade, while participation in the labor market has increased. In other words, overall employment is at a record high.

However, German wage dynamics have been rather disappointing over the last 15 years. Wages have been going sideways, creating some political and social tensions. Slow wage growth has also resulted in some nervousness in other parts of Europe and at the European Central Bank. If wages don’t grow much despite low unemployment, has the relationship between unemployment, wages and inflation broken down?

A breakdown of the so-called “Philips-curve” would be particularly problematic in the eurozone. In particular, the eurozone needs to see inflation rates that differ across its different geographic parts so that adjustment dynamics can play their full role. In particular, stronger countries with tighter labor markets should see higher inflation rates than weaker countries with higher unemployment rates. That means that German wages and inflation should now grow more rapidly than Italian or French ones.

So the fear in Europe was that German wage inflation was perhaps not following the typical reactions to unemployment anymore, making growth and adjustment in the entire eurozone more complicated.

Recent data appear to prove those fears unwarranted. The tighter labor market is gradually also leading to stronger increases in wage agreements in collective bargaining. One important example is recent demands by the metal unions, the IG Metall, to increase wages by 6% — a sizeable increase in an environment of less than 2% inflation and around 1.5% productivity growth. These demands were combined with demands for more flexibility in working hours. The increased demands are also starting to be visible in earnings, which have increased almost 4% on an annual basis.

These recent wage increases happen against the backdrop of significant immigration. Beyond the many refugees that often do not enter the labor market quickly, immigration from other EU countries has been increasing substantially and exceeds 300,000 per year in net terms. Gross immigration is now above 900,000 from the EU — a substantial number given the population of 82 million. A large part of these migrants actually enter the German labor market — adding new productive capacities and tax revenues.

Despite the strong numbers and improving situation, the future German government will have to make important decisions to ensure the country’s long-term prosperity. Recent real-wage increases are welcome, but the last 10 years have resulted in a lower share of income going to middle-class workers. While Germany has overall low income inequality, the government will still have to ensure that social tensions do not increase. This is all the more important in a situation where immigrants are perceived as a threat to the country’s social cohesion.

While Germany’s economy is leading in industrial production, industry 4.0 and the use of artificial intelligence in industrial processes, Germany and Europe are laggards in the data-driven, digital sector. Germany and Europe also face important security challenges and further immigration pressures. Germany’s voice in the European debate is indispensable. France’s President Emmanuel Macron rightly expects an answer from Germany for his far-reaching proposals to strengthen cohesion and collaboration in Europe.

The failure to form a new government in Germany is not a crisis nor does it affect the prosperity of the country at this stage. To the contrary, Germany is strong and healthy. Yet, important decisions for the future need to be taken- so the stakes are high for coalition negotiations.

*Guntram Wolff is the director of Bruegel. His research focuses on the European economy and governance, on fiscal and monetary policy and global finance.