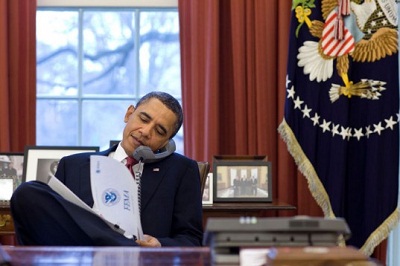 NEW YORK | While Europe is determined to cut the deficit now and see what happens later, the Obama administration has chosen the other way: spend now, cut in the long term. As the president has just put it

Not willing to risk the improvement the US economy is experiencing, he has sent to Congress a $3.8 trillion budget for the fiscal year starting October 1. That is plenty of new money to spend. However the forecast shows a fiscal 2012 deficit of $1.33 trillion. That will be 8.5% of the economy, and it will mean the fourth straight year of a deficit of more than trillion-dollar. Obama would have failed to keep his 2009 promise of cutting the deficit in half by the end of his first term.

The White House claims that it is not the moment to cut the deficit. The economy is improving, and unemployment is decreasing (8.3% is the last figure). As Obama puts it,

“the main idea in the budget in this: At a time when our economy is growing and creating jobs at a faster clip, we’ve got to do everything in our power to keep this recovery on track.”

Obama is proposing more money for job creation. One of the main initiatives, for example, is a $476 billion six-year renewal of a highway plan that would add thousands of construction jobs. He plans to pay it in part with new taxes for the wealthiest. There is a new minimum tax rate of 30% on those earning more than one million dollars a year, the by now famous Buffet tax. He also wants to let the Bush’s tax breaks for those on an income bigger than $250.000 a year to expire. New income would come also from big financial firms, who would have to pay $61 billion over 10 years in a “Financial Crisis Responsibility Fee” to help pay for the bank bailout program. Another $41 billion over a decade will come from the expiration of the subsidies to the oil industry.

Those are only a few guidelines of the 256 pages budget sent to Congress on Monday. But it is dead on arrival: Republicans do not want to approve a budget that expends that much money.

US debt is now out of control, way over 15 trillion. It was $10 trillion on the day Obama took office. And growing fast:

One thing is clear: This budget would immediately increase that debt. But the White House considers it will pay off.