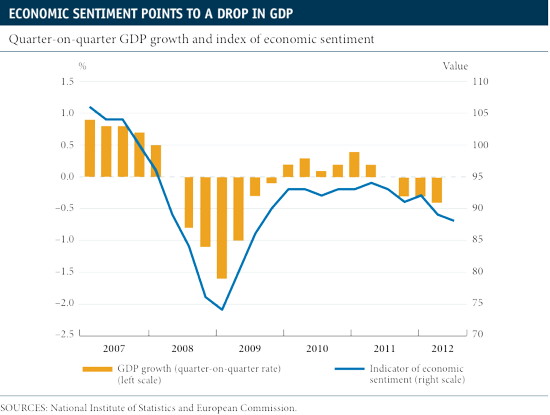 Unlike in previous recessions, public consumption and investment won't be able to offset the drop in private demand. To give a recent example, in the 2008-2009 recession the public sector made a positive albeit modest contribution to growth in GDP in Spain. However, the public sector's level of debt makes it unlikely that the public sector can act as a stimulus in this recession.

In the first quarter of 2012, public consumption had a negative contribution of -0.1 percentage points and the Bank of Spain predicts that this contribution was even more negative in the second quarter. Moreover, due to the extent of fiscal adjustment that must be carried out in 2012 as a whole, a significant contraction in public spending and investment is expected for the second half of the year.

The measures announced by the government in July are a step in the right direction in order to meet the deficit targets agreed with the European Commission. On the one hand, fiscal measures have been approved with the aim of increasing government revenue while attempting to minimize their effect on economic activity. The decision has therefore been taken to raise indirect taxes (a VAT increase) and reduce Social Security contributions, which should stimulate job creation.

On the other hand, measures have been taken to contain spending, such as cutting civil servant wages and reducing unemployment benefit after six months.

Moreover, an ambitious plan of reforms has been announced, running over several years, as well as liberalizing several economic sectors that, to date, had enjoyed certain restrictions to free competition. For example, the liberalization of retail opening hours and professional services.

In the medium and long term, these measures should contribute positively to the economy's growth. On the one hand, fiscal consolidation will assure the sustainability of Spain's public debt and improve confidence both at home and abroad. On the other hand, the structural reforms will improve efficiency.

However, they will probably lead to contraction in the short term. The impact of these new measures, which will be concentrated in the second half of 2012, is in addition to a context of generalized economic decline. Given this new scenario, the growth prospects for 2012 and especially for 2013 have been revised downwards.

Even the Spanish government has revised its macroeconomic estimates downwards and has lowered its growth forecast for GDP in 2013 from 0.2% to -0.5%. Along these lines, we have also revised our growth forecasts for Spanish GDP down to -1.5% in 2012 and -1.5% in 2013.

Spain is facing a decisive second half of the year to resolve the debt crisis. The government's ability to quickly and effectively implement the adjustments announced will be a key factor in determining a prompt solution to the crisis. The ability of European leaders to make fast progress in fiscal and banking union will also be crucial. Only then will we be able to embark upon a process of sustained recovery for the Spanish economy.