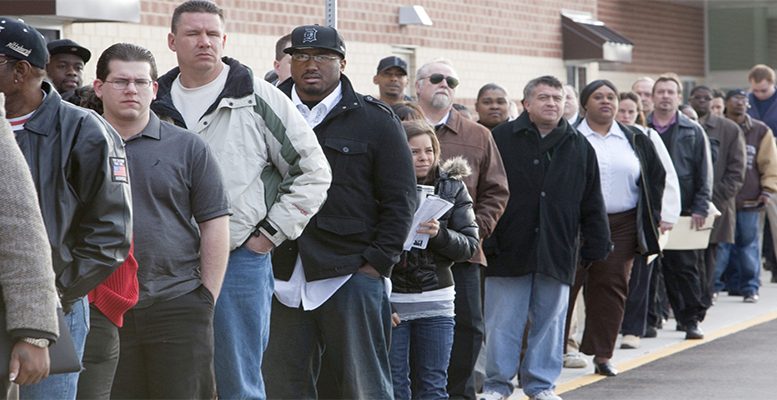 It seems to us that “unemployment” is a very flaky variable. It is easily jostled by non-monetary factors like changes in the minimum wage, length of time benefits are available, ease of getting benefits and, most crucially for our purposes, by changes in related measures of labor force utilization such as the Employment to Population ratio (EPOP) and the Labor Force Participation Ratio (LFPR).

It is entirely possible for the unemployment rate to fall merely because the participation rate has fallen – and vice versa. Marginal potential workers get discouraged and leave the labor force, relying on family, friends, savings, retirement benefits, other benefits and, oftentimes, just economizing. Whatever the precise cause, it is the “economizing” that is the motor as it reduces spending, causing recessions or just permanently slower growth.

Sure, there are underlying demographic changes taking place that can affect labor force participation too, such as more women participating in the workforce and also the great “going to work” and then the great retiring of the baby-boomers. Nevertheless, these are all gradual changes.

None is anything like so abrupt as to explain the massive break in trends seen in 2008.

Scott seems to have forgotten that the start of the actual crisis was an increase in money demand, otherwise known as less spending. The less spending is both a real and nominal phenomenon. It is the “less spending” that pressures companies to reduce costs, and then downwardly sticky wages means costs are reduced via lay-offs, leading to falls in labor utilization. The important point here is that sticky wages are not the cause of the crash.

It is the sudden drop in spending that precedes the sticky wage problem and the consequent labor utilization/unemployment problem.

What causes the sudden drops in spending are anticipated changes in money supply relative to money demand. Here we can agree with Scott. Mismanagement of money supply by the central bank.

To put it another way, anticipated NGDP growth, needs to be kept as stable as possible, and this is done by gently feeding increased money demand with more money supply. In addition, the central bank is in charge of the money supply. If the market anticipates contraction in the money supply then it has the potential to seriously disrupt nominal spending.

This is what we saw in the US in the 1930s, and most seriously in 2008 when slowing NGDP growth was met by restrictions in money supply, with disastrous results. Money supply should have been expanding to offset the falling NGDP growth expectations. Since 2008 money supply growth has continued to be restricted, continually reigning back those expectations with negative impacts on both nominal and real growth.

Thus, nominal spending should be the centerpiece. Scott’s schematic is actually rather misleading as a result. He seems to have forgotten his classic posts on the “hot potato” effect (HPE) that explain the process very clearly. It is the HPE that is neglected by macro economists, and feared by central bankers, but it is the key to understanding and managing stable nominal growth in spending. Central bankers fear it might get out of control, but it never does unless they let it, or desire it – as in the Weimar Germany hyperinflation.

As Scott put it:

Many people continue having trouble with the “hot potato effect,” which to me is the sine qua non of monetary economics.  You either understand it, or you understand NOTHING.  They want explanations they can understand at the individual behavior level.  But that just won’t work in this case.  Part of the problem is that people want to think in terms of a Real —> Nominal transmission mechanism, which seems natural in a world of sticky prices. “Why would Joe buy a new car?”  But that won’t work either.  It’s a dead end.

The implication of the correct dismissal of Real->Nominal is that there is only Nominal -> Real. Now, however, Scott wants to have three worlds. An “only nominal world”, an “only real world” and a third world of interaction where the only mechanism is sticky wages. This schematic is messy. We preferred the old “classic” and much simpler Sumner where the only “real problems were nominal” ones.

Sure, the balance between Real and Nominal growth can be poor: too little Real and too much Nominal, and it shows you have a Real problem. Too little Nominal, however, will not mean more Real, it will be less Real. It is an asymmetric rule.

Err to the downside on Nominal and you will get less Real, a crisis and a long-run depression. Err to the upside on Nominal and there is little damage to Real, although you may end with a “long inflation”. It cannot guarantee that the Real will be any good, but at least it will not be the fault of Nominal undershooting.

The real question he needs to answer is this: If the Fed runs NGDP at 3.0% for the next 5 years, or 5.0% for the next five years, is there a difference in aggregate 5-year output and employment?