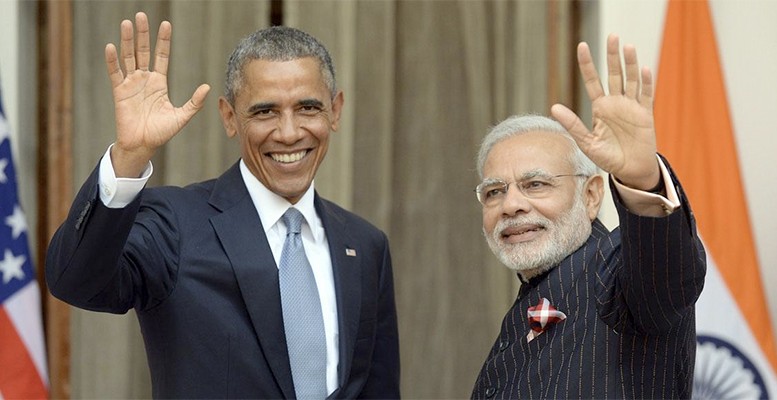 This article was originally published by Fair Observer

Atul Singh | After decades of frostiness, the world’s two biggest democracies are drawing closer because of geopolitics, economics and culture.

The United States and India are the world’s two biggest democracies. Both of them are diverse and multicultural nations. Both are also deeply divided and cacophony rules during raucous elections. Both of them have what Joseph Nye calls “soft power” along with economic heft and military might.

The countries have many interests in common. Yet they have not been the best of friends and only now are relations starting to warm up. As Indian Prime Minister Narendra Modi pays his second visit to the US, relations are better than at any time in the past, but a long road lies ahead for both nations.

US-India relations have a tortured past. During World War II, Indian leaders like Mahatma Gandhi and Maulana Azad were grateful to the US for supporting India’s independence. Azad was the president of the Indian National Congress from 1940 to 1945. He met Americans regularly when he was not in jail, and most Indian leaders looked to America as a moderating influence on British imperialism.

Soon after independence, the US-India bonhomie evaporated. Both sides made multiple mistakes. The US supported apartheid in South Africa and got rid of Iranian Prime Minister Mohammad Mosaddegh though a dirty coup. These actions rattled a newly independent India that was opposed to racism and imperialism.

As the Cold War intensified, Pakistan became a key ally for the US. Just as in Latin America, the US threw its weight behind Pakistan’s military dictators. Multicultural India, a thriving democracy, was treated with active hostility.

Relations reached their nadir in 1971 when President Richard Nixon sent the US seventh fleet to the Indian Ocean on the advice of his rather famous national security adviser, Henry Kissinger. The US supported “the killers and tormentors of a generation of Bangladeshis” because of blind allegiance to a Cold War ally. As a result, an entire generation of Indians grew up distrusting the US and detesting its alliance with Pakistan.

When the Soviets invaded Afghanistan, the US armed and trained the mujahedeen in Afghanistan through Pakistan’s Inter-Services Intelligence (ISI). The ISI diverted much of US aid to promote insurgency in India. For President Ronald Reagan, General Zia-ul-Haq was a “front line” ally in the fight against communism and tacitly supported Zia’s “bleed India through a thousand cuts” policy. Terrorism was a feature of daily life in India, but the US chose to disregard Indian concerns repeatedly and callously.

Two developments changed US relations with India. The first was the collapse of the Soviet Union. This led to the opening of the Indian economy in 1991. Now, India presented a potentially vast market for American companies and Uncle Sam found Indian consumers too seductive to resist.

The second was the September 11 attacks in 2001. This happened not too long after radical Islamists hijacked an Indian plane to Kandahar, Afghanistan. The Taliban regime aided, abetted and sheltered the hijackers. The Indian government shamefully acceded to the demands of the hijackers, who went on to play unleash incredible violence later. More importantly, the hijacking emboldened belief in al-Qaeda that it could pull of more spectacular acts.

At this time, Pakistan was backing the Taliban, which in turn was supporting al-Qaeda. For the first time since 1947, the US realized that it had created a Frankenstein’s monster. Even longstanding Pakistan lovers in Washington had to accept that “the land of the pure” had moved toward a toxic form of Islam and was using terror as an instrument of its foreign policy. From now on, the US had no choice but to embrace India.

Under President George W. Bush, the Indo-US nuclear deal marked the high watermark of a new relationship. Since then, the relationship lost momentum because the US was bogged down in Iraq and Afghanistan, while India was ruled by an ineffectual prime minister who was merely a proxy for Congress Party leader Sonia Gandhi.

The US did not help itself by treating incumbent Prime Minister Narendra Modi like a leper because of his supposed involved in the 2002 Gujarat riots. This meant the most pro-market reformist Indian leader was systematically excluded from any conversation and US companies missed out to Japanese, European and even Chinese firms in setting up shop in Gujarat. The State Department misread the situation right until the historic elections of 2014, when Modi came to power. To his credit US President Barack Obama moved swiftly when Modi won and invited him to Washington. The bonhomie between Obama and Modi seemed to inspire a new chapter in US-India relations.

Three Reasons to be Friends

Obama became the first president of the US to visit India twice while in office. He also became the first to be the chief guest on India’s Republic Day. Prima facie, it would seem that US-India relations are now remarkably closer.

This is not entirely true because the US is a superpower with numerous interests and many demands on its attention. Yet what is certainly true is that Modi’s energetic diplomacy and Obama’s receptiveness have made a difference. Even more important have been three key reasons that are bringing the US and India closer.

The first is geopolitics or, to put it bluntly, China. The Middle Kingdom has now become the biggest trading partner of many major countries such as Brazil and Australia. More importantly, China holds an estimated $3.5 trillion as foreign exchange reserves. This means it can potentially threaten the dollar’s status as world currency.

China’s assertiveness in its near neighborhood is worrying US allies such as Japan and Korea. Earlier this year, Japan announced a record $42 billion defense budget. Similarly, India is worried about China’s growing strength on its borders, as well as its presence in neighbors like Sri Lanka and Myanmar. Indians still remember their 1962 war with China. It resulted ended in defeat and disgrace. Unsurprisingly, the US and India are trying to reach out to each other.

The second is economics. The US is seeking markets where it can export goods and invest capital. With cheap energy, it is making a strong comeback in a range of industries from chemicals to automobiles. Boeing is still the leading manufacturer of planes, and the US defense industry is probably stronger than ever.

With the slashing of the Pentagon budget, foreign markets have become more important. India is opening its defense sector and the US does not want to lose out to the Russians or French, who have been key players in the Indian market. Similarly, the US wants its nuclear power companies like GE and Westinghouse to have a slice of the Indian market, as India seeks to slake the thirst of its billion-plus population for power.

Indo-US trade has grown from about $5 billion in 1991 to an estimated $65 billion for 2014. US investment in India has increased dramatically, and now Indian companies have begun investing in America as well.

Modi faces great expectations, and his primary task is to generate employment in a country of 1.2 billion with over 65% of its population under 35. He has no choice but to phase out the Nehruvian socialist model that imposed anemic Hindu rates of growth on India. The Soviet-inspired Planning Commission has gone. Although Modi has failed to make substantive reforms, his has been tireless in wooing foreign investment. There is natural alignment of key economic interests for both countries. It is for this reason that both are paying each other more attention than ever.

The third trend that is often forgotten is culture. As diverse and fractious democracies, India and the US are beginning to understand how to deal with each other. Increasingly, the Indian elite send their children to study and the best Indian minds continue to flock to the US. Raghuram Rajan, Arvind Subramanian and Jayant Sinha, three key men deciding the future of India’s economy, have worked extensively in the US after studying in its top schools.

Ties between Silicon Valley and Bengaluru, Hollywood and Bollywood, MIT and IIT run deep. The Indian Diaspora in the US is becoming more influential, and one of them is the assistant secretary for South and Central Asian Affairs in the US State Department.

In India, most people watch American cinema, love American brands and love to work for American companies. In the US, many are turning to India as well. The growing popularity of yoga, meditation and Buddhism in places like New York and California is creating a new familiarity with India.

After many decades of frostiness, the US and India are starting to tango.

This article was originally published by Fair Observer